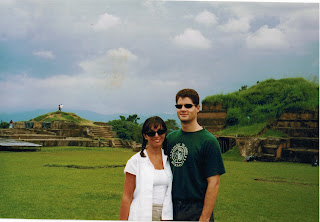 Hello all...so much more to tell you about.   This past weekend was a great time.  We had planned as I said earlier to go to Guatemala.  Well that didn't happen. But we didn't want to stay all cooped up in the hotel so we rented this cute little house at a place called Salinitas.  It is about one and a half hours west of San Salvador.  We first thought about going to a hotel somewhere but a privately owned summer home was highly recommended and available to rent.   Karen was also joining us for the weekend.  Saturday morning we had our interactive Spanish class with out teacher, Hugo.  He took us to this place where there is stall after stall of pupusa vendors.  (Pupusas are a Salvadorian delight...sort of a flat bread pancake with cheese and beans or pork inside.)  The pupusas at this place were made from rice instead of flour.  They were amazing.  Then we met back at the hotel.

The owner of the house was actually going to take us there.  We  met him and realized that we got a bit of bad information.  We had been told that there were lots of restaurants and things around the house, we were told wrong.  So off grocery shopping we went.

Secretly, the thought of  actually cooking after all this  eating out was very appealing. Well the drive was as always an adventure unto itself, but with Kris' Central American driving skills, we managed to arrive alive....barely.

The house, was to our surprise in a secluded private area, just steps from the beach.  It had it's own pool and 3 bedrooms and kitchen of course.  And no summer house is without 3 large hammocks and a butler...Hilberto.   Hilberto and Kris got along great, even thought Kris practiced on Hilberto's   "Spanish and not a stitch of English" qualities.  Well, we BBQ   and sunbathed and sat to candlelight and gossiped.  It was an enchanting place and an enchanting time. Not soon to be forgotten.

Well after our great weekend retreat we had to return.  But then it was Monday night and Tuesday was All Saints day which means a day off for Kris and another night out on the town.  We did a pubcrawl sort of ...well not quite.  Salvadorians generally go to the beach for the weekend, so the Monday night festivities were weak.  But we did find a new haven. Could be the next "Hammerheads" for those who know it.  It was called La Luna.  An eclectic little place, kind of place the creative minded hang out at...or as our friend Eduardo puts it...a Hippy Hangout.

Well it was still interesting.  If not for a play going on, we would have staying.  But this weekend La Luna awaits and we get to see the local Rock and Roll band.  Also this weekend out friend James is coming to visit us.  He worked with Kris in the Bahamas and is now in Guatemala.  We are going to a place called Bahia Del Sol in Costa Del Sol.  We have a cottage booked there for the weekend.  All the reviews have been good so I look forward to sending some more notes when we get back.  For now....adios amigos.

Posted by Kristofor Olson at 7:15 AM