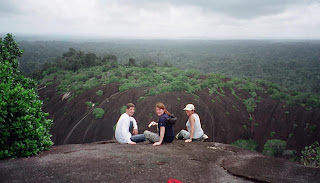 For those of you who are looking for a wonderful place to go on holiday, Suriname is it.  We are still in love with this country and for the last few weekends, have been able to see much more of it.

In the last journal I commented about our trip to Galibi.  It is beautiful!! On the eastern coast of Suriname, Galibi is a peninsula full of nice beaches and small villages accessible only by boat.  For the first day we just hung out and settled into our camp. We were with a group of friends and families that work for Shell.  They had all traveled together before, so there were no strangers in the group and they made us feel right at home.  Luckily for us there was a strong wind blowing which kept the mosquitoes away. 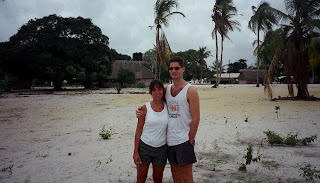 Because this was Easter weekend the two local villages, Christiankondre and Longamankondre were having traditional celebrations.  This was gearing up to be a weekend to remember.  The second day we spent walking around the villages, and playing a Dutch game called Jewel.  Kris also created a game of horseshoes with coconuts.  The sun was hot and the water cool.  We couldn’t ask for a nicer and more relaxing day.  The evening plans were to go and see the turtles lay their eggs.  We left at 9:00 pm and after going up the river on the boat for an hour, the guide finally stopped.  After checking in with the Galibi Nature Reserve “police” we went on foot to look for the huge turtles.  I didn’t think it would be too hard to spot one as they are quite large and kick sand high in the air when digging their nests.  After 5 minutes of walking there she was.  Apparently after turtles start to lay their eggs, they don’t move until they are finished.  This mama turtle had just begun.  She was about 500-700 lbs.  She was very still except for the dropping eggs and the nod of her head every few seconds.  It was an unforgettable experience!  Not just watching her lay, but simply being this close to such a beautiful animal.  After the eggs were laid she started covering them up with sand, a process that normally takes about 15 minutes.  But she took her time.  We could all sense that she was scared.  Every time someone would speak she would stop and look around.  She was extra careful making sure her eggs were protected.  We watched her return to the ocean and we happily got on the boat.  It was a bitter sweet experience I won’t soon forget. Sweet because it was special to see one of these creatures and be part of nature’s wonderful miracles, but also bitter because I felt like we were almost intruding on something that maybe humans shouldn’t be allowed to participate in.  The debate continues in my own mind.  But I am grateful I was able to experience it. 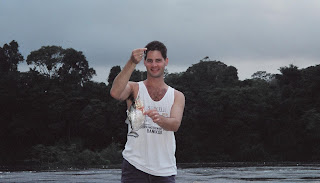 The following weekend was another fun filled adventure.  My friend Wendy arrived from Seattle and we planned to go to a place called Raleigh Falls.  It is accessible by car and boat, but only after a 5 hour journey.  We decided to cheat a little and fly.  We arrived at the airport and got our gear and bodies weighed for flight 001 on GUM Air.   Believe it or not, the “GUM” part of the name does not refer to the stuff that holds the wings on.  The six seater Cessna carrying Kris, Wendy, Rute (our guide) and I took off and after a scenic 45 minute flight landed on a grass airstrip in Raleigh Falls.   The guides were there to welcome us.  There are no villages in this area, only one research station and a few tourist cabins.  We met Marcel who was the manager of the research station and Steven and Natasha.  All had done research about the primates in the area.  There are eight types of monkeys on the nature reserve, which happens to be one of the world’s largest.  During our first day we traveled by boat to visit another tourist cabin and to go for a  walk in the jungle.  The jungle was full of life everywhere you turned.  There were spiders, frogs and lizards.  The lushness of the trees provided a blanket from the rain and the sun.  After our walk they took us for a swim under a small waterfall.   It was great after a few hours of walking in the humidity.  That afternoon we relaxed at camp and Kris went fishing.  After lots of bites (mosquitoes, that is..) he finally caught two piranhas!  It was cool seeing one up close and personal.   It is the fish of choice in this area. 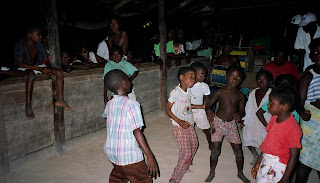 The next day we took a hike to a granite mountain called Voltsberg.  It was a two hour walk through thick jungle to get to the base of the mountain.  The two researchers Steven and Natasha came with up to see if they could spot some monkeys.  After 5 minutes of walking one of the researchers, Natasha, called us over to look at a male Howler Monkey sitting in a tree above us.  None of us had a clue how she spotted him.  It is no wonder she is a monkey researcher!  It wasn’t long before we spotted another group of monkeys.  Then another.  Both of different varieties.  We also saw a small animal that looked like a big rat.  We finally reached the base of the granite mountain and before too long had made it to the top.  After a few moments I heard a strange echo in the distance.  I realized it was a Howler monkey!  Marcel confirmed it was and we all sat and listened to the strange, eerie howl. We began our descent just as it was beginning to rain, which made going down steep granite a little tricky.   We then made our way back along the same trail to our boat and returned to camp.  The rest of the weekend we relaxed! 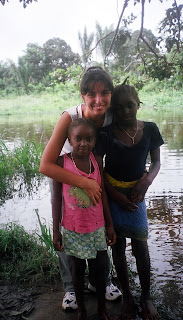 This past weekend was our final trip into the interior of the country.  We decided to go to Jaw Jaw village on the Upper Suriname River.  Jaw Jaw is a traditional Maroon tribal village again only accessible by boat.   We went with my friend Nesta and some friends as well as our guides from Raleigh Falls, Rute and Marcel.  It was a full bus!  We left early on Saturday morning and arrived at Jaw Jaw four hours later, the last hour by boat.   We were immediately welcomed by about 20 village kids, mostly naked.  We first settled in then took  a tour of the village.  Most of the men were not there.  There is an election in Suriname in a few weeks and the political parties were busy spreading their propaganda throughout the villages.  The villages take full advantage of the election and also of the bribes for votes that many of the parties give out.  As were swimming a boat came into the village full of food, beer, whiskey and a brand new outboard motor.   All were “gifts” from one of the parties. 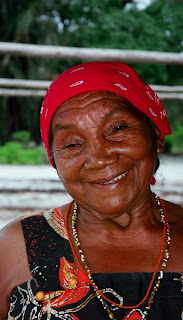 In the village, which consisted of 2000 people and almost as many huts, we visited some of the older ladies making cassava bread and were offered samples.   The men and women sleep in separate huts but have communal kitchens.  Men are allowed to have more than one wife, but no more than 6, and of course at least a dozen kids.  The women still wear the traditional dress, and some not much at all.  It was unbelievable to see that so many people still live this way and seem very happy doing it.  Everyone was very friendly to us and very welcoming.  They mostly communicate in their native language but also speak Dutch.  After dinner, we had the local band come to our camp and play the traditional African drum music for us.   As there is not much to do after dark, most of the village showed up for the party.  And can they dance!!  All the kids were on the floor before you knew it.  It was quite a site and an unforgettable evening.  The next day we took a trip upstream to visit more villages.  All of them seem to have their own traditions, but still live very primitively.  The women cook, clean, grow crops and have children.  The men hunt and build huts.  They have few luxuries and seem to do quite well without them.  They have all the essentials of life and most have never been to the city.  It was a peaceful and eye-opening experience that will be long remembered by us. 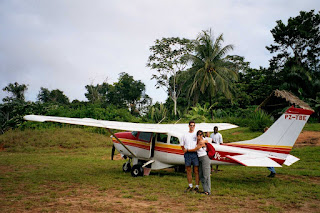 Until Barbados, where I’m sure there will be more adventures,

P.S. Wendy and I went to French Guyana, France for the day.   It was so cool!!  We ate croissants, sipped cappuccino and spoke French to the locals (ok that’s not true).  We also hit the only bank machine for miles around, and the closest one to Suriname.  Ahhh, la vie en rose!!

Posted by Kristofor Olson at 7:36 AM