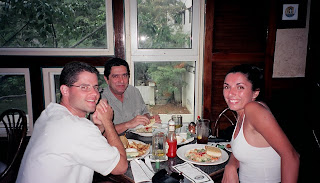 This is a start of a new year for me (Kris) as I turned 29 years old yesterday!  We had a very relaxing day, and finished it off with dinner at a nice steak restaurant and a marvelous cigar.  We have been very bad recently at keeping our site updated so I thought today is a fine day to write another update.

Since last time, we have had visits from our friends Tom and Linda from Detroit, Mike and Nola from Chicago, and Martin and Marianne from Denmark.  As well, Ana has found herself a new job....at Shell!  In fact we are now working together on the same project and having a great time of it!  She has been involved mostly in the training and documentation side and has been doing a superb job.  We will be finishing the work in Dominican Republic within the next couple weeks then the plan is to move on to doing the rollout of our system to the other 17 countries in the region.  We don't exactly know what will happen yet, though we will likely be keeping a central base then just traveling out to the other countries periodically.  That will be nice for us as we don't have to pack up and change homes every month, we were not looking forward to that. 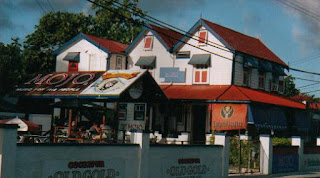 Of course, the wedding is fast approaching.  Ana is returning to Canada at the end of May for two weeks for her bridal shower and also to send out invitations and sort out the remaining tasks on our "Wedding To-Do List".  We will update the wedding page today with the latest so check that one out.

Ana and I recently took a long weekend trip to Barbados and Puerto Rico.  Part of the reason was to get a repair done to Ana's engagement ring, which I purchased in Barbados last year.  We had a very nice time and checked out some of our old favourite hangouts such as the almighty Mojos drinking hole where I imbibed in the frosty delight of many delicious Banks beers.  On the way back from Barbados we spent a full day in San Juan, Puerto Rico.  Our friend Tico picked us from the airport and played the perfect host.  We had a great tour of old San Juan and spent a few hours there.  We also hit the malls (Plaza de las America) and did some damage to the credit card.  The majority of things were cheaper than in Santo Domingo so we stocked up on a lot of stuff.  We both really liked the city and would love to spend more time there exploring the country side.

I suppose that is all the news for now.  I'm also going to update the Dominican Republic page today with details of the new places we have visited so have a look at that one.

Oh yes, today is Mother's Day, have a wonderful one Mom!!!

Posted by Kristofor Olson at 7:51 AM No comments: