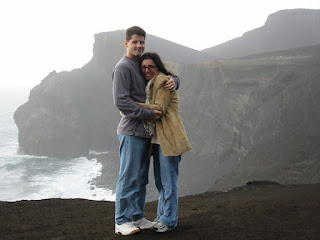 Welcome to the new year!  After more than three weeks of glorious vacation, Ana and I are leaving for Holland today to begin work on Monday.  We are both extremely excited about it and ready for what will surely be an interesting year.

For our Christmas holidays we spent two superb weeks in the Azores!  We were joined by Toddy Van Hees for the first ten days then by Ana's parents for the second week.  We stayed with Ana's aunt who is also named Ana and lives in a town called Santa Cruz which is in the Lagoa area of the island of San Miguel.  Ana, Toddy and I also traveled to the other islands of Faial and Pico and spent a few days exploring.  The weather was very rainy for the first part of the trip, but the temperature never fell below 15 C so it was actually very pleasant. 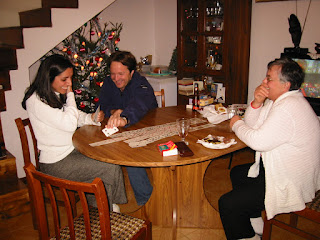 Some of the highlights include seeing the natural ocean pools in Pico and Lagoa, a scary plane ride from Ponta Delgado to Horta, the harbour in Horta, the view from Scrimshaw's house in Faial, the volcano blasted landscape on the west of Faial, the Furnas hot springs in San Miguel, a tea factory, the delicious red wine from Pico, fresh local bread and cheese with Tia Ana every morning, every meal we ate at Tia Ana's house, picking fresh bananas and oranges in the backyard, seeing a dog riding on top of a trotting horse, New Year's Eve on the Avenida, and the beautiful view from Lagua do Fogo!

I also had the chance to meet the rest of Ana's family who live in the Azores and they were all exceptionally nice people!  In fact, all the people living there were very friendly and helpful, making it a great place to visit! 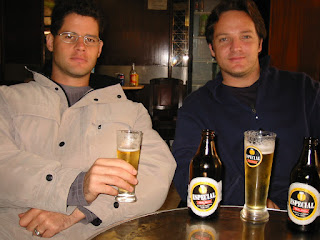 After returning to Brantford from the Azores, we decided to take a trip to see Marty and Jen in Ottawa.  So we rented a PT Cruiser (groovy little car) and made the trip.  It was so nice to see where they were living and how things were going.  They are both doing very well in school and enjoying Carleton University.  They gave us a great tour of downtown Ottawa including the parliament buildings which were spectacular.

On the way back from Ottawa we stopped in at Mark & Linda's in Kingston where they treated us to a delicious lunch.  We had a good, but very short visit, before we were on our way to Toronto.  We stayed with Ana's brother Mark in Toronto and that night we met up with Carmen, Diane, and Lena and had a nice dinner out.

To finish off the vacation, we had a couple days in Brantford to sort things out and get all our things packed.

So now it is on to a brand new year and a brand new adventure!!  We really hope to see lots of you as visitors so don't be shy!

Posted by Kristofor Olson at 7:55 AM