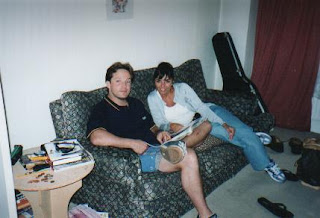 We are exactly one week into our trip and everything has been GREAT!

Upon arriving in London, we went immediately to pick up our round the world tickets at the travel agency.  That done, we went to meet Toddy and he gave us the keys to his place so we could have a short nap during the afternoon.  It was a beautiful three hours nap, at least enough to power us up for the night.  We went to a local pub with Toddy and his flatmates TJ and Simon and Simon's girlfriend Angela.  We had a nice meal and a chat and drank about four pints of Stella then went back to the ranch.  The next morning I woke up with a stinking, filthy headache the size of a small continent.  It was the kind of headache that wakes you up at seven in the morning then hurts so bad you can't get back to sleep.  Aaaaaggggh!!  Needless to say that ruined our plans to get going early and meet our friend John Murray out at Windsor.  I should know that I just can't take the beers like I used to.

That evening we joined Toddy and his flatmates at a backyard barbeque which was being held by one of the guys on their cricket team.  It was a good party, but got even better when one of the boys got out the snuff and started handing it around.  In the true spirit of adventure, both Ana and I lined up a bit on the back of our finger and snorted it back.  Yowwwwww...what a wasabi blast!!!  If we were getting drowsy at that point in the party, we were certainly awake after that stuff!  The party ended up with us spending about an hour and a half in Catford trying to find a bus/taxi/mini-cab - anything to get back to the Docklands.  We finally got one to stop, but he told us we couldn't all fit into a single cab, so Toddy volunteered to go back to the party, that's the spirit!

Next day we did actually make it up early and were off to meet up with Heinrich and his wife Davina for Sunday lunch.  They took us out to a lovely country pub where we stuffed ourselves with traditional English grub then took the scenic route back to their place for a cup of tea.  Before long we were at the airport and on the plane looking forward to the twelve hour journey to Capetown, and the last few hours of Sept 22, 2002 - the first anniversary of our marriage! 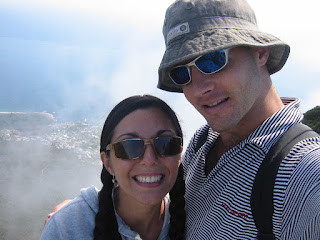 We arrived the next morning to a beautifully clear and sunny day in Capetown!  The first sight of Table Mountain was just as fabulous as I was expecting.  After arrival, we found some hostel information and jumped on the "Backpacker Bus" to a great hostel near the Waterfront called The Big Blue.  We spent our first day taking a big walk through the Seapoint and Waterfront areas.  We went to bed early that night, since we didn't sleep much on the flight, and work up the next morning, 12 hours later.  And for some reason, the combination of the bad airplane seat, followed up with 12 hours in bed was enough to give me a horrible back ache, so I spent most of the day hobbling around Capetown's city centre like an old man.  It is slowly starting to feel better, but I think it will be with me for a while yet.  Despite this small problem, we spent the last few days exploring Capetown and making plans for the rest of our time here.  We did a wine region tour yesterday which included stops at four wineries and five wine "samples" which were actually about half a glass each, at each of them.  After 20 of those beauties, the facade of a cultural/educational event was completely shattered and all the participants were well and truly smashed.  Today we took the cable car up to the top of Table Mountain, which was definitely worthwhile. 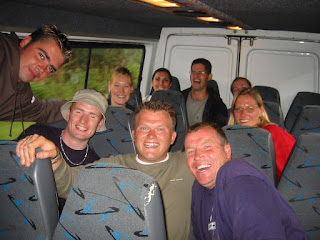 We have decided to rent a car and start slowly making our way up to Johannesburg.  We get the car tomorrow and are going to do a day trip up the west coast then the next day we'll leave Capetown for a small town east of here called Hermanus.  Should be lots of fun!

Posted by Kristofor Olson at 8:18 AM