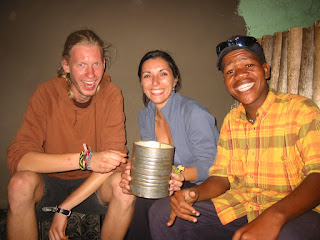 We apologize for the lack of communication in the last week.  We've been busy making our way up the east cost of S. Africa.  It's been fantastic and we've seen so much...it feels like we've been here for months.  After we left Hermanus we made our way into an area in the mountains called Outdsdoorn.  It is Ostrich capital of the world.  There are more there than anywhere.  They grow them for their meat and their feathers.  We went on a great tour of an ostrich farm and I even got to ride one.  I'm sure will show you the hilarious video at some point.

The area is also known for its caves.  There is a huge cave system in the mountains there called the Cango Caves.  We went on a tour into the caves called the adventure tour.  I must not be very adventurous because it was hard work.  We firstly went into 3 large caverns, all with their own unique names and stories.  Then the more we walked the smaller and smaller the caves and their entrances got.  The last tunnel we had to climb through a chimney like formation.  If you weighed 10 lbs more then I do you'd have a hard time make it up.  Then the last one you had to lay on your stomach and pull yourself through and then go head first out of another hole.  It was an interesting experience, not for the timid or claustrophobic.

Our next stop was a beautiful place, aptly named Wilderness. This is where our friends Trudy and Philippe have built a gorgeous home overlooking a cliff and the Indian Ocean. The village is also home to a lagoon so it has plenty of places to go canoeing and hiking. We mostly stayed around the house and tried to help out a bit with a plumbing problem that soaked their entire main floor. They showed us such a splendid time there from the champagne sunsets to the fantastic meals out at the local restaurants.  From Wilderness we also made a trip on the local steam train to a place called Knysna.  t has a beautiful harbour area and we went on a tour of the Knysna Oyster Co. For a whole $1.00 we went on a little tour and did some oyster tasting.

As we continued our way up the coast, things are getting less and less developed and more and more African. The next area we went to was called the "Wild Coast" or also known as the Transkei. The Transkei use to be its own  country, but in the last 10 years they have become part of S. Africa.  Not soon enough as the locals have stripped every tree in sight, so the initial drive was a bit of a bore. The trees were replaced by these interesting little green and brown clay huts. These belong to the local Xhosa people.  This tribe dominates the area and we spend some time getting to know a bit about their culture.  We stayed on the coast in a teeny little town called Coffee Bay. The hostel was owned by a couple who have turned this very primitive place into a paradise. There are hammocks and a bar, a walk to the beach and lots of place to hide and read a good book.  They even have yoga!!!  In the evenings they have traditional drum lessons and they have the local kids come and sing and dance their traditional music.

Perhaps the nicest part of our trip so far was on a Town Tour we went on. Silas our Xhosa guide took up to his house to meet his family and told us about his tribe. We walked to their sacred pools were they baptize people and make sacrifices to their ancestors.  Lastly he took us to the local bar.  It was quite dark as there was only one candle, (no electricity in the village).  Inside there was a few ladies and 3 men smoking and enjoying a brew as they sat on some beer crates.  Silas bought us some local beer made from corn and the music came on and all the ladies got up to dance.  It was like a regular nightclub except that the women were wrapped in blankets and some didn't have shoes. One even had a beautiful baby wrapped on her back. So we danced, and drank and laughed. It was amazing.

So today we left our new friends, to find a few new ones in the mountains. Hope to hear from you all soon.  Happy Birthday Mom!!!

Posted by Kristofor Olson at 8:24 AM