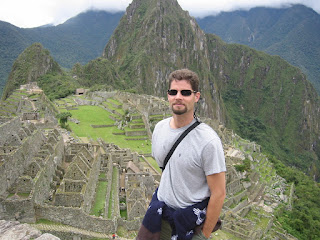 What a year it's been already and it's only the 10th of January.  We needed a second wind for this last half of our adventure and we have certainly gotten it here in South America.  WHAT A PLACE!!!!  Where do I begin...We arrived in Santiago, Chile and spent a day adjusting to the 16 hour time difference.  We then called our friend Alvaro and went for dinner with him in his wife at a great little restaurant in one of the suburbs of the city.  Our first day out and already the place is full of character and amazing sites around every corner....viva los latinos....they are a great bunch!! 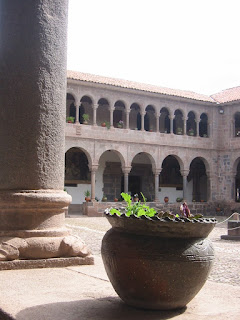 We no sooner got to Santiago, when we found cheap flights to the northern border city of Arica.  So off we went to the desert.  This little town emerges out of no where like a mirage.  Not much there but a huge market, miles of sand, a museum with Inca mummies  and  plenty of transport options to Peru.  The border crossing was amazingly straight forward and our driver did everything from fill out forms to stand in line!  What service!  The first major town we arrived in was called Arequipa.  The centre of town is full of beautiful colonial style cathedrals and buildings which are lit up at night!  Although it seems to have much to offer tourists, there didn't seem to be many, and that was perhaps the best part of all.  We also went to a 15th century convent called Convento de Santo Catarina, which is the size of a small town. 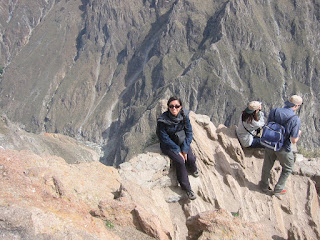 We next decided to go on a  fantastic over night tour to the second deepest canyon in the world called Canon de Colca.  Quite a sight, as were the condors which circled overhead.  One part of that tour that I WILL try and forget is the giant rodent (Guinea Pig) that Kris ate that evening...Ugh!!  They are apparently a local delicacy and Kris insists on trying all local foods.  We had a diverse group of people on the tour; four Peruvians, one American, one Brazilian, one German, one Nicaraguan, one Palestinian, one Irish, one French and us two Canadians.  Quite a group, but to top it all off, we ALL spoke Spanish!!! 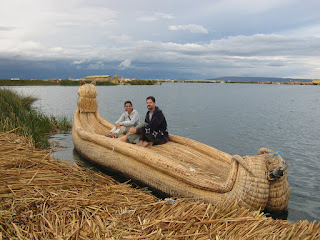 Our next stop was the famous Machu Picchu ruins near the colonial town of Cusco.  Cusco is one of the last inhabited civilizations of the Incas.  It is surrounded by ruins, and has a variety of churches,  and other monuments, later built by the Spaniards which arrived in Peru in the 16th century.  Machu Picchu is the largest  and most well preserved display of Inca ruins in the world, and it was magical.  It took 4 hours by train and another 1/2 hour by bus to get there, but it was worth every minute.  We had a  wonderful guide who described he place, like he had built it with his own two hands.  He was the most passionate and articulate tour guide we've ever had!!  So just when we thought that nothing could top what we'd seen in Peru, we come to Puno, a small unattractive little town on the highest navigable lake in the world called Lake Titicaca.  This afternoon, we went on a boat ride to the a group of  floating islands made entirely of reeds.  On these islands live a community of 800 descendants of a pre-Inca race called the Uros. They build the islands, their homes, boats, all out of these water reeds.  They survive by fishing and then bartering with other floating islands and the people from the mainland.  Such a simple life, but they all had the most magical smiles.....we have so much to learn. 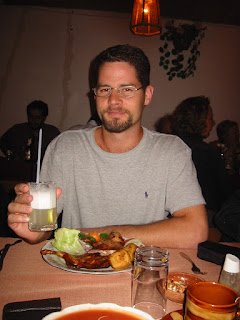 Posted by Kristofor Olson at 12:01 PM