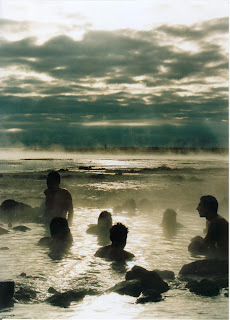 We're back in Chile after our Bolivia expedition.  In short, we were quite disappointed with Bolivia.  We found the people to be much less friendly and competent than Peru and Chile and even rude sometimes.  La Paz was quite an interesting city upon first arrival but once you got into the guts of it, we found it to be just another busy, filthy, noisy city, except with many more aggressive beggars and merchants.  Once good thing was the low price of things, there were a lot of bargains to be had.  I bought a stringed instrument called a charango, which is a beautiful sounding guitar-like beastie used in Bolivian music.  Ana picked up a lovely alpaca sweater.  We also found a great hotel where we did a bit of relaxing. 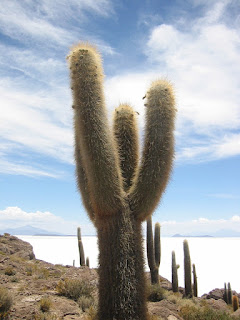 We booked ourselves on a four day tour to the Uyuni region in the south west part of Bolivia.  We had a bit of trouble getting there and saw some really seedy towns along the way.  But once the tour was underway, we really did have a great time, mostly due to the fantastic group we were with.  We had a Bolivian guide named Emilio and the other people were an Australian/New Zealander couple and a Swiss couple, all of whom were fantastic people with great senses of humour.  The Bolivian countryside we traveled through was nothing short of amazing.  The scenery changed from a gigantic salt lake, to dry desert cactuses, to huge snowy mountains, to lunar dust, to muddy lakes full of flamingos, to red lakes, to mountains of borax and, finally, to a final night's accommodation that was so putrid, so foul, and so disgusting that even Ana was looking for the sweet anesthesia of alcohol.  I don't want to write too much about it, I think there is a good story to come from that trip! 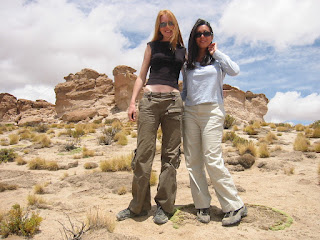 We arrived back in Chile yesterday to a town called San Pedro de Atacama which was described as a lovely frontier town by the guide books but is actually a dusty, overpriced, gringo hole.  The only redeeming features are the selection of nice restaurants with great food and groovy bars.  We had a splendid time last night with a bunch of the people from our tour.  We had dinner and drinks in a restaurant with an open roof in the centre allowing lunar rays to shine in and a crackling wood fire on the ground.  We sat around the fire playing cards and having a good laugh.  We are going to meet up with the Australian/New Zealander couple in a few weeks in Argentina and Brazil which is sure to be a great time.

We will spend the day here tomorrow then in the evening catch a night bus back to Arica where we will have a day then fly back to Santiago.  It seems like it has been ages since we arrived in Chile but it's only been a couple weeks!  Good sign, that means our trip isn't going too fast...

Posted by Kristofor Olson at 12:06 PM