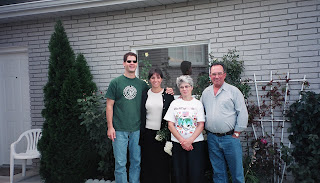 It has been a week of rotten weather and I have discovered a few new types of snow here in Ontario.  In Saskatchewan we have only three kinds of precipitation; rain (which makes farmers happy), hail (which makes farmers cry), and snow (which makes farmers go to Florida).  In Ontario they are more advanced and have many more varieties.  Freezing rain is when it's quite cold outside but somehow raining.  When rain hits the ground or the surface of anything it instantly freezes which results in a icy covering.  When a car is covered in this you need a piece of something solid to chip the ice away, a regular plastic credit card just won't do as an ice scraper.  Another variety even more interesting is ice pellets.  This is when it is cold outside and raining high up in the atmosphere but instead of the raindrop turning into a lovely artistic little snowflake it instead freezes into an icy bullet.  And when you get hit in the face by these ice pellets it does indeed feel like you've been struck with a shotgun blast.  When these ice pellets start to pile up on the ground they don't turn into fluffy snow, instead you get piles of miniature ice cubes which are not easy to walk or drive on.  The end result of all this is absolute chaos.  I woke up the other morning and the radio stations were listing off all the places which had closed down due to weather and these included many schools, hospitals, government buildings, universities, public transport and highways.  Because of this we had to cancel the driving trip we had planned to take to Ottawa to see my brother and his fiancée.  So instead we rented a bunch of movies and hung around the house eating and drinking and laying on the couch watching the tube.  And we wonder why Canadians put on a little weight during the winter months!

Our job hunt is underway and we have been busy emailing people, making phone calls and surfing the internet.  Ana's mom even did her part and put together a little shrine in the kitchen with some icons of saints and burning candles which is meant to give us divine help.  It's similar to a shrine she had constructed to get us home safely during our big trip which obviously worked so what the hell, it's worth a try!

There hasn't been much else happening.  Oh yeah, Ana tried to kill her mom the other night. We took them out for dinner for John's birthday and went to a local country restaurant.  Ana's mom ordered the prime rib which came with a side bowl of horseradish.  I put a bit on my steak and Ana's mom asked what it was as she had never seen it before.  Ana said it was a Canadian steak sauce and offered her the bowl to try it.  Before Ana could do anything, her mom scooped up a big pile on her fork and dropped it in her mouth and started munching.  For those of you who have experienced a high power horseradish blast you can imagine her reaction.  She blurted, "yahhh!" and the tears started to flow as she was desperately grasping for her water.  Though we felt sorry for her, Ana and I were laughing hysterically by the point until the tears were falling from our eyes as well.  She's used to eating spicy Portuguese hot sauce which is also very spicy but has a rather 'slow burn' which sneaks up on you then lingers around for a while.  The horseradish effect is completely different.  As soon as it hits your mouth it sends a wasabi lightening bolt right up your nose and you can feel smoke coming out of your ears as you are blinded by the tears.  Then, fifteen seconds later it's all gone, almost like it never happened.

That's about all the news for now.  Wish us luck on the job hunt!

Posted by Kristofor Olson at 12:13 PM No comments: