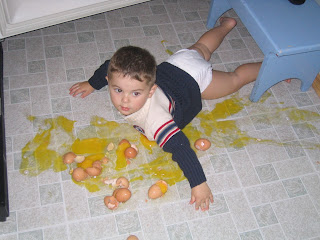 I was inspired by a recent email I received from my friend Johnny in New Zealand, who has a three year old as well as a brand new baby girl.  It was a "Three Strikes" email - in other words, three episodes of naughtiness involving their son which made for a challenging day.  As fate would have it, we had a "Multi Strike" day of our own yesterday.  Read on....

Friday began as usual, both Magnus and I awakened by the jet engine scream of Ana's hairdryer, which for me wins the award for the most horrible sound in the world.  We saw Mommy off to work in the normal fashion - me distracting Magnus with the toilet brush while Ana slipped out unnoticed, thereby avoiding a round of "don't leave Mommy!" tears.  After a bit of frolicking around in the living room, we moved into the kitchen for my favourite part of the day - breakfast.  I strapped Magnito into his high chair then made him a piece of toast with peanut butter, added some grapes to the side of the plate, then took a big chance and poured him half a glass of orange juice.  I presented this to his Majesty on the highchair platter and returned to the toaster to create one of my "Marmite Delights" and make coffee.  Upon my return, after first feeling a grape squish under my barefoot, I discovered that my delinquent son had scattered his grapes all over the floor, then poured half the orange juice on top of himself and the other half on top of the toast, creating some sort of peanut butter porridge concoction.  Strike One.

After the cleanup, we went downstairs for our morning workout.  I managed a weakly round of biceps and triceps; enough to keep my arms from turning into spaghetti, but hardly enough to keep me in good shape.  Magnus started initially with ten reps of turning the power button on the stereo on and off, then followed that up with three solid sets of throwing dominoes around the room.  He then did a focused round of emptying items out of the storage closet, including light bulbs, fishing rods and bottles of jam, and finished that one off with attempting to stick the pokey end of an umbrella through the gyprock.  Becoming tired of the workout, he finished up with an actual set of chin-ups, with daddy providing some assistance from below.   We then returned up stairs, where I turned on Dora the Explorer for him so I could get some work done.  The television predictably edged child into an uninspired, zombie-like state, allowing me an hour of actual quiet to do some nasty old work stuff.  During that time I went into a bit of a work induced trance myself and was snapped out of this by the sound of Magnus rifling through the refrigerator.  I raced out to find him feverishly trying to knaw through a plastic bag of pepperoni sticks.  "Oh, maybe he's hungry?" I thought, so I transported him, a pepperoni stick, and his sippie cup full of water onto the couch where he immediately and remarkably fell asleep.  I returned to my work induced trance then later, at the sound of his stirrings, found that he was holding his sippie cup in such a way that it had entirely leaked out all over him and all over the leather couch.  Strike Two (but mainly my fault!).

Soon after he awoke, my mom called.  Magnus was busy running around the house pulling the registers out of the floor while I talked with mom and enjoyed my nice big hot mug of chicory coffee.  Distracted by Magnus balancing precariously on the edge of the Ikea chair, pulling the DVD out of the player, I put my cup of coffee on the coffee table and went  to rescue the kid and the player.  As soon as I put him on the ground, he raced over to my coffee, picked it up, and dumped it on the carpet.  "Mom, I have to go," I said, then went to search out some absorbent cloths as Magnus looked on smiling.  Strike Three.

The best part of Friday Man-day is the field trip, which can range from a visit to the post office and record store, to an extended journey to a kid's play place, or sometimes just a walk along the river.  This day, we walked/strolled over to the Blackfoot Diner - a circa 1950's old fashioned, greasy spoon restaurant, that must be seen to be believed.  There, we met a few of the WestJet folks for lunch and admittedly, the child's behavior was exemplary - he sat there calmly dipping his chips in gravy, sharing my clubhouse sandwich, making eyes at the girls, and salting and peppering everybody's food for them.  All was well until, at the end of the meal, he unexpectedly lunged across the table and spilled the pot of coffee cream all over the table, seats and people.  Strike Four.

Back at home, the afternoon progressed rather smoothly, allowing me to do a bit of work, and him to redeem himself.  But I was to soon learn that he was not redeeming at all; he was scheming....

Mommy arrived home around 5:00 to be greeted by her smiling, happy little boy, which must be the best part of any parent's day.  Soon after that, our friend Ian and his little boy Jakob arrived with a nice bottle of wine to join us for supper.  The boys had a lovely time running around, playing with toys, while we chatted in the living room.  Before long, we heard a giant crash from the kitchen and raced out to find Magnus sitting on top of the table and the bottle wine exploded all over the floor, wasting all that sweet, precious vino.  Strike Five.

After a lengthy cleanup, we were finally able to make supper, which was a simple pasta with meat sauce.  We sat down, dished up the food, including a nice little plate for Magnus, as this was his first experience with spaghetti, and started to eat.  It wasn't long before Magnus heaped a meaty, drippy load of sauce on his fork and flung it at Ana, splattering her and the nice white chair seat with staining red sauce.  Strike Six.

The last strike of the night came shortly after dinner, as we were enjoying a nice cup of chai tea in the living room.  A momentary lapse of attention allowed Magnus the opportunity to zip over to the table, grab Ana's chai, and dump it all over himself, the couch, and the floor, yet somehow managed to avoid burning himself.  Strike Seven.

Surprisingly, as one gets used to living with a toddler, these events seem quite normal.  It was only at the end of the day when we started actually counting the number of "incidents" that we realized this may have been a record setting day.  All I can say is thank god for tile floors, cheap carpets and a good sense of humour!

Posted by Kristofor Olson at 8:11 AM No comments: