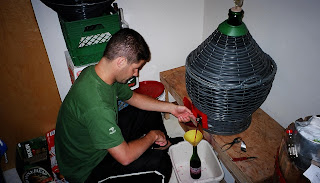 We've gone and done it.  Yep, Cowtown is now just a fantastic memory and we're living in Ontario without jobs or a house.  It seems to be the way we do things, as soon as we're happily settled with friends and a great comfortable routine, we drop it all and head somewhere new.  Maybe we're flaky, maybe we're just always looking for something new, at least we're never bored! 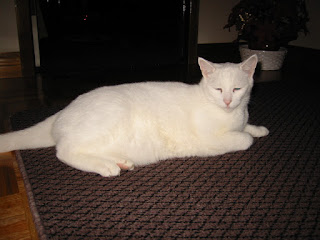 I'm into a whole new routine now.  Since we have Ana's mom taking care of our kids all day long and Ana sleeping until 3 in the afternoon, and no internet connection, it's given me a lot of new found free time.  When we first arrived I just played with the cat Tico for most of the day.  After a couple weeks of that I was finally able to beat him in a race from the couch to the furnace room and back, but I usually had to sideswipe him into the bathroom door to knock him off balance.  When the shine wore off that activity, I went down to Value Village and picked up some exercise videos.  Now in the morning, after Ana's mom cooks me pancakes and bacon, I do the Richard Simmon's "Sweatin' to the Oldies" (volumes 1 and 2) for a while to get a good glisten going.  I've picked up some cool moves off him too, it's amazing how relevant his dancing is even today.  Napoleon Dynamite has nothing on me now.  After that I usually skateboard down to the Taco Bell around lunch and have a couple bean burritos then come back home for a nap.  After that, I pump it up once again, but the afternoon shift is the "Tae Bo" video with that bald guy.  I get to feeling like a real bad ass after a few minutes of that so I normally end up kicking the cat around the basement practicing my new moves, poor Tico.  By that time Ana is up and at 'em so we'll either go out for dinner and a movie or sometimes we'll stay home and spar in the basement so she can get her exercise, and at the same time give Tico a break from the shit kicking I deliver to him in the afternoon.  So I guess you could say it's been a refreshing change from our hectic lifestyle in Calgary.  I think our kids are doing pretty good, but I'm not really sure.  I've tried showing Ana's mom how to use our digital camera so she can document their growth and development then report back to us on their progress, but she hasn't really got the hang of it yet so I'll keep training her.  Ana's dad and I recently made 72 gallons of wine from fresh California and Canadian grapes so that's been saving me a bundle on booze.  Because I like to stay sauced pretty much all day long, I'm able to drink the cheap wine instead of wasting money on beer and hard liquor.  Since I've finally got the internet working, I'll probably take those savings and invest them in some online poker - I'm sure I can make a bundle.

That's our update for now.  If anything interesting happens, we'll let you know.

Posted by Kristofor Olson at 8:31 AM No comments: