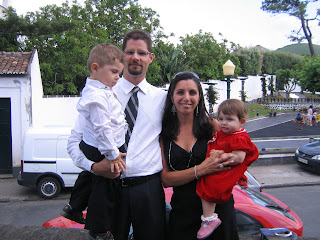 This has been one fantastic summer for us.  To begin with, the summers in southern Ontario are long and very hot which makes for a perfect beer drinking and cigar smoking climate.  I must admit, this is a welcome change from the summers in Calgary which, at times, were indistinguishable from the winters.

The biggest news of late is that Stella has taken to walking on her hind legs with enthusiasm.  That gives us a grand total of three bipeds in the family since Magnus has reverted to galloping on all fours as his primary method of travel.  She is still a bit wobbly but is getting stronger, faster, better each day.  We also celebrated their 3rd and 1st birthdays a couple weeks ago which confirms our fears that Stella will probably never have her own single birthday party due to her parents wonderfully efficient family planning and general stinginess.

Our trip to the Azores was excellent, subject to a few incidents of severe toddler naughtiness.  As we've been there a few times now, this trip wasn't a race to see as much as possible by driving all over the island.  Instead, we had a lot of nice walks, beach days, lounging on the patio and going to family sponsored "events" which included vast quantities of food and alcohol.  In fact, Ana's cousin Paul arranged for a nice beer tap and seemingly endless supplies of kegs.  It was, in fact, a "traveling" beer machine as it made an appearance at every single family function we attended.  One afternoon the great man Toddy Van Hees and I spent an entire afternoon on our back patio with the lovely beer machine and we all got well acquainted. 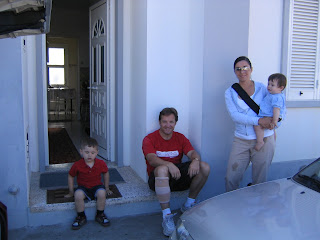 Every time we travel to the Azores we see more and more development.  If I had unlimited resources I would be buying up property like mad there as I expect a huge increase in tourism dollars finding its way there.  There are also a lot of foreigners moving to the Azores which is sure to put even more pressure on property values.  This is quite unfortunate for the locals as there are not a lot of high paying jobs on the island so every day owning a home is further and further out of reach for most people.  I am certain that sometime in the future, we will be spending a lot of time there as both Ana and I find it to be one of the loveliest places on the planet.

We spent the last long weekend of the summer with my brother Marty and his wife Jen in Ottawa for their son Leif's baptism.  I had the privilege and honour of being chosen as Leif's godfather which I am very proud of.  I hope to be a great spiritual mentor to him and also help out with getting his enemies "wacked" when required.

Ana was very fortunate to return to a job with WestJet after her year of maternity leave.  She is working in the same department as before but now in a "casual" role where she's doing 12-15 hours per week from home.  This particular job may only last until December, but at least that gives her some time to explore other options within the company (and keep our travel benefits!).  She really has enjoyed her time there so I hope something works out for her to stay with them.

As far as me, I've been keeping busy with managing and improving the rental properties we've acquired as well as being on the hunt daily for great property deals.  I've also been looking around for a new IT/consulting gig as I feel like I'm not quite ready to move away from that career which has treated me very well over the years.  I think that we will be able to balance our business endeavors with employment, which gives us the best of both worlds - steady cashflow and our "own thing" which will eventually provide for some nice long sailing journeys.

Posted by Kristofor Olson at 9:32 AM No comments: