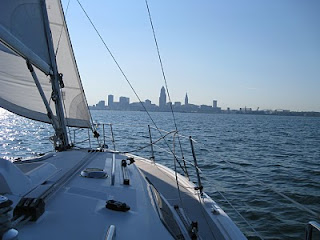 
We awaken early and hoof it back into town to check out a couple shops that were closed the evening before; namely the West Marine store, a small nautical antiques shop and the farmers market. All signs of the previous days poor weather have vanished and it is another hot one. Our trip takes longer than expected (once you own a boat it is impossible to spend less than an hour in a West Marine store…) and we return to Bella Blue at noon, completely drenched with sweat after walking through the heat with a hundred pounds of groceries and boat stuff. We load up the boat, get everything in its place, throw off the dock lines (nothing fancy this time) and head to Cedar Point. This will definitely be our shortest sailing day of the trip as our destination is only a few miles across the bay. We enter the marina and head directly for the fuel dock, it’s been 10 days and, though the tank is not close to empty, it’s time to gas up. She takes $60 worth of diesel, an incredibly small amount considering the number of hours we’ve used the motor during the trip. I only wish Andrew was here with his boat beside me at the fuel pump- his filll-ups are closer to a grand. It’s sweet revenge for all the speed jokes he makes.

We get Bella Blue docked and have a quick look around - the marina is beautiful and very well organized, sort of makes us think we should spend a couple nights here. On check in they gave us vouchers for reduced prices for the parks so we decide to get the full pass which allows us to visit both the water park - Soak City - and the amusement park with all the rides. We take the shuttle bus into Soak City and the kids are immediately in heaven. This is definitely the most elaborate water park I’ve ever been to and the kids wholeheartedly attack each ride they are tall enough to get into. The best part about the water park is that Ana and I can enjoy it too - unlike the kids rides at amusement parks which are…well, lame. We spend the entire afternoon splashing around and it’s not until 6pm that we dry off and head over to the amusement park.

The kids of course love it and the only real excitement Ana and I get is when we’re watching Magnus and Stella ride the rocketship ride and notice Magnus leaning over way too far then see him smash his front teeth into the steel bar they are supposed to be holding on to. Now Magnus’ previous encounters with pain have universally been very unhappy episodes, as he appears to experience pain ten times worse than regular humans, but this one was special. On the first rotation of the ride he’s holding his mouth and looks like he’s about to cry. Second rotation he is simply wiggling his tooth, which has been slightly loose for weeks, but has now clearly been knocked a bit looser. Third and subsequent rotations he has his mouth closed and is intently running his tongue over his front teeth. He has clearly realized that this shot to the face has brought him one step closer to the Tooth Fairy payout, which can then be easily used to purchase candy. If it were only always this easy dealing with his wounds.

We return to Bella Blue by 9 pm and are amazed to look back and see the view to Cedar Point. The rides have all been lighted and the display is amazing! There is clearly no other marina on Lake Erie with such magnificent nighttime views.

I check the weather forecast and it sounds like the wind will be picking up and staying strong all night then turning into thunderstorms later on Sunday. Ana and I decide that it’s the right time for our first sailing all-nighter so we prepare the boat and cast off shortly before 1am.
Posted by Kristofor Olson at 11:30 AM