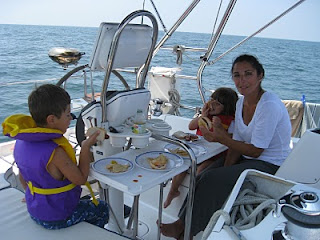 We are up at 3am to get an early start on the 75 mile trip back to Erie. The forecast is for strong north winds early in the day then dying out towards noon so we want to use the wind while it’s there. As usual, the first few hours are excellent sailing, with ten knot winds but they start to die around 7am so I start up the motor and we continue on motor-sailing making about 6.5 knots which should put us into Erie sometime around 2:30 in the afternoon.

We’ve been thinking of where to go from here. One idea was to continue on up the lake and visit Dunkirk, which is probably about 20 miles or so past Erie. But now we’re thinking we might head back to Port Dover a bit earlier and spend a couple nights on the boat there in the marina as per a “regular weekend” and save eastern Lake Erie for a future trip. After all the sailing we have done on this adventure we are much more comfortable with the boat, and in particular night sailing, which makes three or four day long weekend trips over to the US very achievable.

We stop and anchor around 2pm for a late lunch and a swim which feels like heaven. At around 4pm we arrive in Erie at the Commodore Perry Yacht Club after a total of 71 miles. Last time we were here we stayed at the marina next door and couldn’t help but notice that the Perry had a lovely swimming pool, which came in very handy today as it was in the low 30’s again. We sit by the pool for a couple hours and enjoy the sunshine and a couple cold beverages then head back to the boat for a Mexican fajita supper and the third attempt at getting through the same movie. Yes, one gets a bit tired after a 13 hour sailing day.

Just before bedtime, Magnus again pleads for me to pull out his front tooth. Since the kiddie rollercoaster incident his front tooth has become progressively less connected and is now wiggling freely. I’ve tried pulling it with my fingers but that is not working so he is now begging for me to use the pliers in the toolbox to yank it out. I pulled out his last two, so I do have the stomach for it, but I’m not entirely sure it’s ready so I’ve asked him to wiggle it as much as possible and we’ll try to extract it tomorrow. We’ll be sure to do it in front of Ana as she was completely spooked out and actually shrieking the last time I cranked one out.
Posted by Kristofor Olson at 8:52 PM