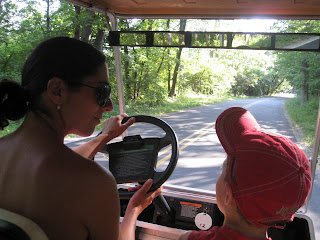 Just heard a “pahn pahn, pahn pahn, pahn pahn” call on the radio from the Coast Guard in Cleveland. At 10:08 pm last night a 12 year old boy went missing and his last know location was in the water at Euclid Beach. They are asking all mariners to be on the lookout for him and to assist if possible. This is the first such call we’ve heard on the radio, certainly reinforces the notion of paying strict attention to safety procedures on the boat. We heard a “Mayday” call a couple days ago from a boat taking on water but didn’t hear if they found the boat or how it ended.

Directly to the north a three masted tall ship just appeared, what a beauty! It is amazing to see such a variety of vessels that appear on the lake. From tall ships to freighters to super yachts to 14 foot fishing boats. I guess that’s why they call it a fresh water ocean.

We had a nice breeze until around 6 am when it turned directly into our face and slowed considerably. Up until then we’d been racing along nicely and actually hit 7.56 knots which is the fastest we’ve done in Bella Blue. Since we’re planning on covering a lot of miles today we decide to motor the rest of the way which allows us to do over 6 knots and make pretty good time.

We stop at around 9am for the morning swim and the lake is clear and much cooler out in the middle - about 26 degrees C. In some of the marinas the water temperature was as high as 33 degrees which renders the boat air conditioning system much less effective since it relies on cool water. Speaking of that, when we bought this boat we had no idea how important an air conditioning system would be. Without it we would have been absolutely melting this week. While we’re underway and have the hatches open we get quite a lot of air coming through which keeps it fairly cool, but as soon as you stop moving it turns into an oven down below.

We make landfall at Kelley’s Island, Ohio around 4:30 in the afternoon and immediately head to the public dock for a swim. As I’m about to drop Magnus in the water one of the other kids there mentions the abundance of water snakes that hang around the dock and swim in the water. Considering Magnus’ morbid fear of snakes we pull the plug on the dip and head back to the boat for cold beer and apple juice.

To end the day we decide to rent a golf cart for an hour and do a tour of the island. Ana gets behind the wheel and the kids and I strap ourselves in tightly. The island is not very big so an hour is plenty of time to tour around and see the interior forest and beaches. We stop for a quick walk on one of the beaches in the public park, just enough time for the kids to get covered in sand. After returning the golf cart we take the kids for an ice cream, walk back to the boat, make bbq pizza for supper, enjoy the live band which is playing dockside at a pub and retire early to cap off our longest sailing day yet - 75 miles and 12 hours on the water.
Posted by Kristofor Olson at 7:19 AM