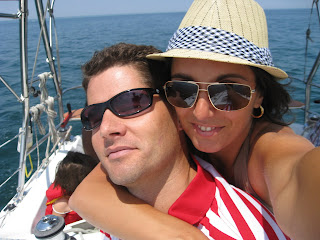 It is a beautiful Sunday morning in Port Dover and all's well with the Olson family!

Life has been a bit hectic for me lately, I'm managing a big complex software upgrade project at work which has jacked up the stress levels to a higher than comfortable level.  We're in the busier part of the project now so hopefully the next couple weeks will not be quite as chaotic.  I actually haven't been working more than 5 or 6 hours a week in overtime, but my days are packed from the moment I step in the office until I leave, weary at the end of the day.  When I look back at what my normal work weeks were like when I was a consultant, these really doesn't compare so I don't like to complain.  But then again, back then I didn't have kids, a house, a boat, and rental properties to also be taking care of and that makes a big difference.

Nevertheless, summer is here and we are back in our element.  Yesterday morning I had to take something from the boat back to the car, which is a long walk down the dock, across an asphault road and into a gravel parking lot.  I didn't bother wearing my shoes and as I was walking across the gravel some guy pointed out my bare feet and said he wasn't brave enough and instead chickened out and wore shoes.  I told him that stepping on all those sharp little rocks brought me waves of pleasure as it reminded of winter and having to wear socks and shoes all the time.  Yes, summer is here and my feet feel great.

Happy Fathers Day to all you poppas out there!  I'll be calling my dad today and we're also going over to Ana's parents' place for lunch to see her dad.  Her folks were actually here in Port Dover yesterday along with Ana's brother Mark and his girlfriend Stella and we had a fantastic sail to Potohawk Point - spent the whole day there swimming and enjoying the sunshine.  After a day like that it feels like you've already had a full, terrific weekend so today is really a bonus day.  Stella has been talking about Father's Day all week so I think she must have made me a card, can't wait to see it when she gets up.  She is consistently the last one up on the boat, that bobbing motion really knocks her out.  In fact, all of us sleep exceptionally well on the boat, the trick is pulling yourself away from the dock party, which can extend into the wee hours at times, so I usually utilize the kids as my excuse to leave ("well, have to go get the kids ready for bed" or "time to read the kids a story and brush their teeth" or "better play a quick game with the kids before they go to sleep\).  What usually happens is I head straight to bed as they are busy playing games or watching movies in their cabin, though I do always say "good night" first.

We are all very excited about our summer vacation as we'll be heading back to Saskatoon for a giant Olson family reunion which will be attended by every single member of the Olson family.  It's going to be hard keeping all the little kids straight as the cousins have been popping them out at a mostly steady rate for some time now.  After those few days of chaos we'll be returning to a glorious two weeks of sailing on Lake Erie, similar to the trip we did last year.  We're not sure of the exact route we'll take but we might go west along the Canadian shore this time then back on the US side.  We're hoping that the weather turns out as perfect as it did last year for our trip, but we'll have to take whatever we get.

In other news, Magnus has learned how to ride a two wheel bike and, much to my surprise, it only took him a few hours to learn.  I was expecting to work with him all summer on this but he really caught on fast and now he's burning up the cul-de-sac on his Spiderman bike.  Stella has become much more interested after seeing Magnus up and running so she wants to be two wheeling it as soon as possible.  Magnus wasn't interested in biking for the longest time and I kept tellling him that once he learned that would be his first taste of real freedom.  He didn't believe me at first but now he agrees.

More to come!
Posted by Kristofor Olson at 8:07 AM