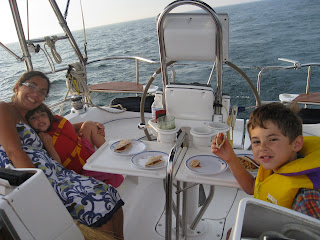 As the clock struck midnight, all was well in the Calgary int'l airport and the first day of our Lake Erie sailing trip had begun. Stella was sleeping on a most uncomfortable airport bench, Magnus was playing with his toys and Ana and I were impatiently awaiting our 1am flight to Toronto, feeling completely exhausted after a wild four days of the Olson reunion in Saskatoon. We boarded the plane and departed on time then 3 hours later were landing in Toronto, which made it shortly after 6am Monday morning. After a very groggy 60 minute and blissfully traffic-free drive we were in Brantford having breakfast with Ana's parents, after which she went grocery shopping and her dad and I went out to do a small repair job at one of our rental properties. We returned home after that and spent several hours doing laundry, unpacking, repacking, unloading, reloading, tidying, grass watering and so on, until we were finally ready to go and sped off for Port Dover at 2pm.

We arrived at the dock, loaded up the boat, had a very quick chat with our friends, then set sail for Erie, Pennsylvania. Our friends Andrew and Michelle would be joining us, though as they have a powerboat, they had a much shorter trip so left a bit later. Our sailboat, Bella Blue, which is a 33 foot Hunter, was looking great as Andrew had washed it for us the day before, and she was ready for a good run.

We switched on the radio shortly after leaving harbor to check on the weather and got our first piece of bad news - severe thunderstorm watch for Erie and surrounding areas. There was a brisk 15 knot wind blowing steady from the west, which was favourable for sailing, so we set our main sail with a small reef as the full sail was overpowering the boat. The first few hours were a nice ride as the wind was strong and waves were growing in size and splashing over the bow at times. Our sense of dread was building along with the waves as the radio produced a seemingly endless stream of unfavourable news. Besides the thunderstorms, which had been upgraded to a warning, there were also water squall warnings and a tornado watch issued for western Lake Erie. We naturally began to doubt our decision to push ahead with our crossing, but decided to go on until we reached the tip of Long Point, at which time we would decide whether to cross the main lake or drop anchor and wait out the storm. Andrew soon came roaring up behind us and passed by and let us know by radio that he would keep us informed on the weather situation as he crossed the lake.

As we approached the point there were more weather warnings and now also reports of a capsized boat. We were sure there would also be forthcoming reports of mad sea monsters, tsunamis, hurricanes and u-boat attacks, but fearlessly we sailed on. As we continued on into the main part of the lake, we found the wind actually slackened off and the waves grew larger, but longer, which results in a rolling motion that can produce motion sickness, but fortunately we were all fine.

We made it across the lake without no sea serpent sightings whatsoever and could see the lights of Erie as darkness fell, and soon it was completely black and we were navigating by gps, compass and lights.. The basic lights for navigation are quite simple, all boats must have a red light on the left, or "port" side of the boat and a green light on the right or "starboard" side plus a white light on the stern. This way when you see a boat at night you can tell what direction it is traveling. Harbor entrances are always marked with green and red lights identifying the channel to use, with the red light normally on the right.

As we approached the harbor there was what looked like a small factory showering spot lights everywhere located right in the main channel. This turned out to be a dredging ship and as we passed it we saw it dropping it's huge scoop into the lake then retrieving it's prize of several tons of mud, which it unceremoniously dumped onto the deck, for later transport to land. Minutes later we came across another strange sight, what looked like a row of Christmas tree lights in the air, then we were blinded by a spotlight, as the huge ship anchored in the channel spotted us and gave us the warning signal to keep clear.

We motored into the main harbor and over to Perry's Landing marina, which is where they have the video phone which you use to contact customs and get cleared into the US. I tried the phone a dozen times then handed it over to Ana so she could try her luck. Magnus was still awake so he and I kept ourselves entertained flicking spiders from their dock webs into the lake, while Ana called and called but with no answer. After dozens of attempts and 45 minutes we gave up and proceeded to the marina which we were staying at and where Andrew was awaiting us with a chilled bottle of Dom Perignon, 1998. Customs would have to wait until tomorrow as we were exhausted, tired, but very happy to have made the crossing.

After a very unorthodox, though highly effective docking maneuver, we were tied up, plugged in, switched off and sipping on champagne, visiting with Andrew and Michelle, wondering how on earth we were still awake and lucid at midnight after such an event filled day and sleepless night and day. We finished the bottle, said goodnight and I was sleeping before my head struck the pillow.
Posted by Kristofor Olson at 9:30 PM