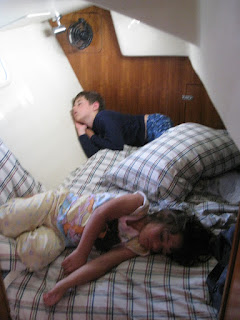 I woke up at 4 to my gently bleating blackberry alarm clock then fell immediately back asleep as I was way too tired to get up. One hour later both Ana and I awoke, got the boat prepped and threw off the lines. We motored out into the lake to find stronger than expected winds and a very choppy lake. The further out into the lake we got, the harder the wind blew and the higher the waves became. Unfortunately, the nice strong wind was blowing directly in our face, forcing us to tack back and forth toward our destination, adding many miles onto our trip. As the boat was pounded by the waves, spraying water on the unfortunate cockpit members, the kids slept soundly below. At one point they both woke up and moved from the v-berth at the front of the boat, which was taking the greatest punishment, back to the aft cabin, which was slightly better, and immediately fell back asleep. The boat rocked and rolled, making it difficult to move around below, though Ana was able to make us a coffee and peanut butter and jam sandwich for breakfast. The kids slept on. It wasn’t until 9:30 that the children finally surfaced, after a restful and long sleep, assuring me that we have the best traveling kiddies in the world.

After nine hours we finally reached Vermillion, and it seemed like we were on the water for far longer than that. Because of the rough water we didn’t get to have our morning swim so Ana had a shower in the boat and the kids and I just stayed grubby. There were heat advisories broadcast over the radio the whole days as temperatures in the area were in the mid 30’s and humidity was maxed out, so it was a hot ride indeed, though the wind helped keep us cool on the boat. After negotiating an unusual, but neat harbor entrance, we started making our way down the channel and soon realized this was no ordinary stop. In place of coal piles, ancient factories and freighters, we passed luxury homes, neatly manicured lawns, beautiful yachts and lovely restaurants and bars, making this by far the prettiest town we’ve seen on the lake.

We pulled up to our marine, called the Vermillion Power Boat Club, and were immediately met by the manager who helped us dock then gave us a tour of the facilities. Because of our Boat US membership and the yacht club we belong to in Dover, we got 25% off the first night and the second night free. We like free, especially when it’s at a marina that has wi-fi, grills, outdoor covered eating area, full kitchen, fuel and pump-outs, and a huge air conditioned clubhouse with a giant television, perfect for a couple hours of cartoons for the kiddies. There is also a Quaker Steak and Lube restaurant immediately beside the marina, which is a US restaurant chain devoted to the burning of fossil fuels in all types of fast moving vehicles. A perfect fit for a marina with gas guzzling boats, I’d say.

Once we were settled, Ana got the kids ready and took them for a walk to the public beach to go for a swim, while I stayed back to get some work done. I’m in the middle of a big project at the moment so sadly have to spend some time on work stuff, but considering I’m working on a sailboat in a luxury harbor, I’m really not complaining.

When they returned several hours later we got the sand sprayed out of everybody’s butt then had a lovely steak dinner, and during dinner heard of their discoveries that afternoon which included a couple consignment stores, nice coffee house, beautiful beach, marine shop and, best of all, the sighting of a three foot long water snake, which they spotted from the bridge which passes over the canal.

While I finished up my work, Ana cooked us a delicious steak dinner and after gobbling that down we had a relaxing night and mainly stayed hunkered down in the air conditioned boat, relishing the thought that the next day’s plan was to stay put and have a slow, leisurely day.
Posted by Kristofor Olson at 8:09 AM