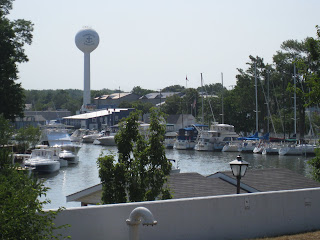 At 6 am I was up after a lovely night’s sleep so I grabbed the laptop and a coffee and snuck out of the boat to set up shop under the picnic canopy. It was already hot outside so my attire consisted of bathing trunks and sunglasses. I wanted to get a couple hours work done before the kids got up so I sat there tapping away until I was joined by a groggy but relaxed wife a while later, then shortly after that a little girl named Stella, who had a giant smile and hair that I can only describe as a nice place for a family of mice to bed down.

After getting everybody shampooed, shaved and shat we went out for a walk to see the downtown area and check out the shops. It was already wickedly hot by 10 am so we dashed from shadow to shadow, along the way finding a boat club with a pool that we were invited to use (yay!). As most of the shops did not open until 11 we sat down in the boutique coffee and gift shop and ordered iced coffees and iced tea for the kids. In the US, these drinks aren’t quite the same as we get in Canada. If you get an iced coffee from Timmy’s, it comes deliciously creamy, sweetened and in a slushy-like form. In the US, it is simply cold, brewed coffee with ice cubes in it. I am and have always been a black coffee, no sugar king of guy, but I had to add six packets of sugar and half a cup of cream to get this particular beverage into a drinkable condition. Same story with the iced tea – cold tea with ice cubes. I don’t think the iced tea in Canada bears any resemblance to brewed tea whatsoever, it’s mainly a powered mix of sugar and chemicals as far as I can tell, but it does taste good. Six packets of sugar in the tea wasn’t enough to make it drinkable for the kids so I drank that too, and in the process, got some sort of cold filtered caffeine rush that was quite enjoyable.

We visited the beach for a while, taking some glamour shots of Stella and her mom in front of the Marine museum, then headed back up the street to see the shops. We picked up sunglasses for the kids and Ana bought a nice dress at the consignment store. By this time we were steaming hot, and we had a report from Andrew that they were on their way, as the wind the previous day had prevented them from coming and they spent the night in Mentor, and were invited for drinks by the boat next door, a 70 foot monster. When they asked him what he did for a living he said, “I run a couple hotels”. They asked, “Oh, you own a couple hotels?”. He replied, “No, I just run them.” It’s that kind of place.

On the way back we stopped at the grocery store and picked up supplies, which included a box of 24 Labatt Blue for sixteen bucks, I just couldn’t pass it up. I’ve made a pact with myself to never buy alcohol in Canada again and so far I’ve been doing quite well. When we arrived back at the dock Andrew was there pumping another five hundred bucks of gas into his “investment” as the boating magazines like to call it. What they actually mean is an investment in your social life, but they make it sound like an investment in future, which is really just a guaranteed way to drain your bank account. BOAT is actually an acronym – Bring On Another Thousand.

After he extinguishes the flames from his credit card, we sit down for a nice beverage then head over to Quaker Stake for lunch, where I had one of the best burgers ever, the “Lubeburger”. A name this is just begging for a joke, but I suppose it fits the theme of the joint. Everywhere around us hung motorcycles, sea-doos, boats, small cars, engines, gas pumps and tv’s featuring mainly racing. Americans sure do love their themed restaurants. Canadian themed restaurants are few and far between, either because we have no imagination or maybe the Americnas have already had all the best ideas. We do have Moose Winooski’s in Ontario, at least, which features moose heads hanging everywhere and log cabin styling, sort of like Montanas but way cooler. But I digress.

Around 4pm or so this devilish looking layer of blackness boiled into the sky above the harbor. The temperature dropped ten degrees instantly so we closed up the boats and headed inside the clubhouse. Within minutes there were 50 kph winds, a deluge of rain and a scattering of hail, which did a wonderful job of cleaning up the topside of our boat. We enjoyed the storm from inside and the kids enjoyed cartoons on satellite tv for a couple hours

The rest of the day was taken up with having drinks, playing with kids, checking weather, doing laundry, having drinks, going for ice cream, having one more drink, checking the weather, then heading to bed. Overnight there was another vicious storm which felt like it was going to flood the city and explode our mast, but by morning it has calmed down.
Posted by Kristofor Olson at 2:50 PM