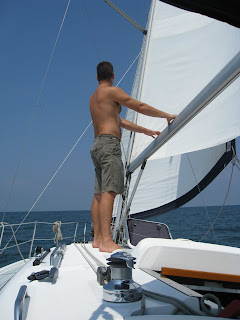 This was the first truly relaxing morning we’ve had this trip – skies were grey, storms were approaching and there was no incentive to do anything besides drink coffee and sit around on the clubhouse couches trying to find adult friendly cartoons on the tv for us to all watch, which was mainly unsuccessful. We were sure there would be a SpongeBob playing somewhere on the six hundred channels but all we could find were lame kids cartoons, fishing shows and infomercials. After making a nice breakfast in the marina kitchen I took advantage of the down time and got an hour of work done, all the while being ruthlessly heckled by the others. By this time Ana had found a break in the weather using this awesome iPad app called Intellicast, which finds your present locations and has detailed radar weather maps and forecasts. Shortly before leaving, we met a young guy who had been caught in the storm the day before in his 27 foot sailboat and thought he was going to die as he surfed his boat down the ten foot waves with no engine or sails and was doing 7 knots. Fortunately the storm didn’t last long, but it gave him quite a scare. I’m sure we’ll have our turn someday but until then we’ll continue to play it safe.

Around noon we packed up our gear, filled up with diesel, emptied the holding tank, threw off the dock lines and said goodbye to the lovely town of Vermillion. With a compass heading of 310 degrees, we set both the main and the headsail and the beautifully steady 14 knot west wind carried us across the water gracefully. The headwinds we’d faced much of the time had necessitated the use of the engine, but today this was not necessary as the wind was at a favorable angle, and gave us a deliciously quiet ride with the only sounds being the water splashing the side of the boat and the kids fighting down below in the cabin.

Sadly, the winds eventually died and we had to fire up the engine. As we approached Kelley’s we decided to stop for our “morning” swim as we had missed it the last time we were out because of the rough conditions. We hopped in suitless hoping, but not really caring that much, that the surrounding boats weren’t packing binoculars. The water was a balmy 31 degrees and felt more like a great bathtub than a great lake. After the swim, we motored in to Kelley’s island, where we were met at the dock by a dockhand and he directed us into a slip. The situation here on a Saturday afternoon was much different than that which we encountered last time we were here, which was midweek. This time the slow, quiet marina was replaced with boats in every slip, drunken dudes leaping off the pier and a heaving patio full of crazy boaters. There was a big festival happening this weekend in both Kelley’s and Put-in-Bay which had attracted thousands of people. After adjusting to the chaos, we met Andrew and Michelle then immediately head to the golf cart rental shop and picked up a lovely six seater. Kelley’s is small enough to do a full circuit in an hour in a golf cart but instead we did a half circuit and stopped at one of the beaches for a swim. As we were crusing around in that underpowered beauty we saw the black storm clouds rolling in which reminded Andrew that had hadn’t covered up his boat so we put the pedal to the metal, layed a mile long blackie on the roadway and were back to the marina in no time. Ana ad Magnus went to check out the local market while Stella and I went back to secure Bella Blue. As soon as she was prepped, the rain started to fall and we were pounded for about half an hour, which gave us time to listen to Nickelback’s “Rockstar” five times, cementing it as Stella’s current favourite. It was also the perfect opportunity to teach Stella the “devil horns” (high five minus digits 3 and 4 – if you can’t figure that out call Gene Simmons and he’ll show you).

Once the weather cleared, we walked over to the restaurants, on the way passing a charming young gent yakking over the side of his boat, attracting a legion of hungry sunfish in the process, making us all a little less hungry. We found a restaurant that had space and had a pretty decent meal, then head back to the marina for a couple drinks at the dockside bar, after which the Olsons retired while Andrew and Michelle pushed ahead and partied on until 4 am, what troopers!
Posted by Kristofor Olson at 11:53 PM