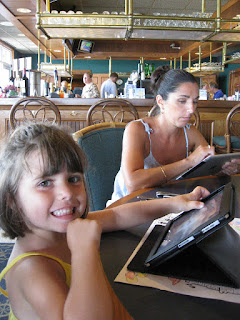 By morning, most of the boats packing the marine the previous night were gone, either back to the mainland, or perhaps they sunk, hard to tell because the water was so cloudy. We slept in until close to 8 and the kiddies were up shortly after that, after which we packed them full of Cheerios and toast then cast off for the short trip across the bay to Sandusky.

The entrance to Sandusky harbor is a little tricky, as there are hundreds of boats zipping around creating very confused waves. The channel itself is quite wide, though it gets shallow if you venture outside the buoys so we were careful to keep well within it. The roller coasters of Cedar Point loom large to the port side, creating additional distraction as you are close enough to hear people screaming as they plunge to their possible doom.

We arrive at the Sandusky Yacht Club and are met by the dockhands who show us to our slip and help us get in. The facility is beautiful, lots of bit sail and power boats, brand new clean docks, meticulously landscaped grounds and a classy and surprisingly cheap restaurant on site. It seems that every marina we visit makes Port Dover looks worse and worse. It must be the difference between a government owned operation and a private one, though it really doesn’t have to be like that. At our marina, at any given time there are six or eight red t-shirted kids standing on the deck by the marina office, waiting for something to happen. That is something you just never see in the US marinas – the kids working are always doing something and because of it, the docks are clean, no spiderwebs anywhere, grounds are clean, weeds are cleaned up, bathroom are shiny, etc. Our marina manager has been in the position for many years, which always leads to a degradation in the service since the get used to doing things the same old way and there is never a fresh set of eyes to take stock of things. Anyway, I don’t like to complain, so I’ll just get Ana to steal her job and she’d have that marina humming in no time.

After getting settled we head over to the restaurant for lunch and it’s pretty close to a white tablecloth sort of place, unbelievable servers and delicious food. When the kids inevitably don’t finish their food, the server takes it away to pack it up, and it comes back in neat little packages labeled with the date, time, name of the yacht club and instructions on reheating. Next time I simply must wear a shirt and tie instead of the grimy, three days strong, red and white t-shirt I’m sporting.

After lunch, we head to the pool, which is equally awesome – I have a quick swim with the kids then return to the boat to do some….ugh…work and they remain for a few hours. After that we go for a walk downtown then on the way back just happen to pass by the best fish sandwich shack on the lake – The Sandusky New Fish Company where I grab a perch sandwich to go.

We arrive back at the boats for happy hour then Andrew and Michelle head to the restaurant for lunch while we eat on the boat. Before long it’s time to retire to get a good night’s sleep before our big day at Cedar Point.
Posted by Kristofor Olson at 7:20 AM