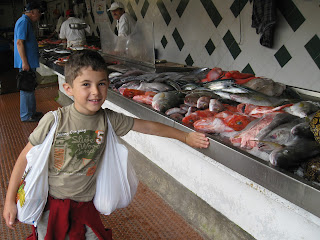 I awoke with a slight headache, likely due to an improper beer to wine ratio I was testing out the day before, will need to make some adjustments on that one, perhaps more beer?  Or maybe I should throw the odd white wine into the mix?  Trial and error has served me well in the past so I will continue testing.
Shrugging off the morning daze, I soon heard the signature honk originating from our open bedroom windows, so I threw on some dungarees and a tunic and raced downstairs.  I threw open the front door in time to see tia Ana doing a deal with the vegetable man in the vegetable van, and from his stereo came the unmistakable rocking sounds of a Mariachi band.  I did sleep through the fish man and bread man, but fortunately the day’s plans included a trip to the farmers market, so I was sure to find plenty of product there.

We got the kids fed, watered, clothed and shuffled them into the car then raced downtown to meet John and Maria, as the first order of business was to take care of some paperwork at the local government office concerning the Borges’ citizenship cards.  It seems that every time we come here, there is always a piece of administration to take care of, so it’s better to get it done early in the trip as it is always twice as difficult and take three times longer than you expect.
After that, we split up and sent John off with his brother-in-law, the ladies shopping and Magnito and I went to the farmers market, which takes place only on Friday and is quite amazing.  It is in central Ponta Delgada and has an amazing range of vegetables, fruit, flowers, meats, fish and cheese.  I’ve learned that the age of eight is when you can really start using your kids as pack horses, so I loaded Magnus up with plastic bags full of fresh produce, which multiplied as I scoured the stalls for deals.  The fish counter in particular was fantastic, and it was all I could do to talk Magnus out of buying a full moray eel.

We rendezvoused with the girls around noon at a local cafeteria for a delicious plate of cod casserole, after which we moved on to the Parque Atlantico – a local shopping mall. We had somehow lost Stella’s jacket the day before so the ladies could not rest until it had been adequately replaced, and I did not want to stand in the way of their mission.  While the ladies bee-lined for the clothing shops, I made the natural decision to take the kids over to the supermarket to check out the booze isles – that is the only sort of shopping I enjoy.

By the time the mission was accomplished, it was already 2pm, but before heading back to tia Ana’s we decided to make a detour to Feteiras, 10 miles west of Ponta Delgada, to check out the piece of land we had purchased seven years previous.  Each time we return, I expect to pull up and find that somebody has built themselves a nice new house on our lot, but fortunately this has not yet happened.  What was there, though, was a thick growth of bamboo and many other other native species, making the lot look rather jungle-like.  The kids thought it quite amazing that we owned this and by the time we left Magnus already had plans to built a petting zoo on it.
On the way home, the kids fell asleep in the back of the car, so we did what we do best and immediately pulled into the first cafe we could find, cranked the windows down, and abandoned our kids for a brief moment of happy couple time over a beer, a coffee and a Portuguese cupcake.  See attached photo, but please do not alert child services because I will deny everything. 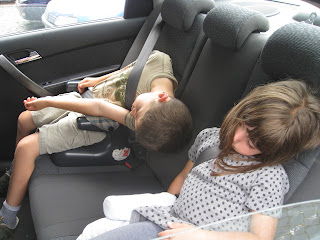 By the time we had happy hour, did some visiting, ate dinner, cleaned up, and played some games with the kids, it was 10:30 pm and time for teeth brushing, snacks, teeth brushing again, story time in bed, pee-time, one more snack, light mouth rinse, lights out, lights back on, and now Stella and I are sitting here at midnight in my bed typing this blog, listening to Billy Joel while Magnus rolls around on the floor playing with Lego.  And the two Ana’s are still downstairs yapping.

Posted by Kristofor Olson at 9:41 AM