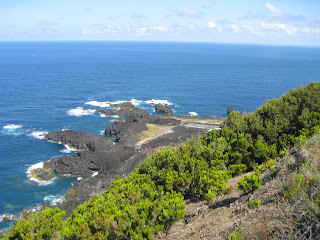 As the end of our trip loomed, Ana grabbed the guidebook to see if there was anything on the island we may have missed, and she found a place called Ponta da Ferraria, which is some sort of natural hot springs in the ocean and is located on the western side part of the island.  So after breakfast we packed up and drove there, along the way stopping at a lovely cafe up on a cliff overlooking a calm and deep blue ocean.

The hot springs themselves are on private property and a small complex has been built which houses a restaurant and what looks like a very nice spa.  You have to pay to get into the hot pools, and when we arrived it was occupied by a bunch of old tourists, floating around farting, so we decided to save the eight euro each and the hot pool the cold shoulder.  A short walk away down a lovely lava rock path is an area with a natural ocean pool, which we explored but decided not to go swimming.  The best part of the experience was actually the awesome view overlooking the whole area, which we stopped at before driving down the half dozen steep switchbacks which led to the complex. 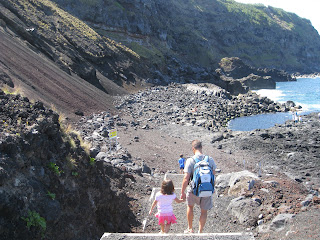 We then drove to the town of Misteiros, which is located on the western-most point of Sao Miguel.  We had been here on previous trips, and weren’t overly impressed, but this time was a much different experience, perhaps because the weather was so beautiful, or perhaps because we weren’t dealing with screaming babies and poo poo diapers, but in any case, this was one of the best afternoons of the trip. 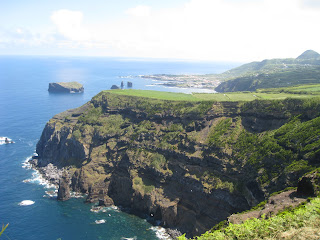 We first took a drive around town, went for a quick stroll to see the beach, whose jet black sand looked extremely hot, then found the natural pools, which looked like a lovely place to spend some time.  But first.....lunch!  We went to a seafood restaurant close to the pools, which actually looked sort of touristy, but served an excellent lunch and offered the cheapest 50cl mug of beer I’ve had yet at the bargain price of one euro and fifty cents.  I had a plate of swordfish, which was cooked perfectly, but the one thing that I’ve noticed is that there is little variety of vegetables served with meals.  Considering they can grow pretty much any type of plant on this island, meals are almost always served with boiled potatoes or french fries and sometimes a small garden salad.  And always bread, lots of bread.  Haven’t any broccoli, cauliflower, peas, carrots, asparagus, or any of the other vegetables you might typically see served in a North American restaurant.  Maybe that’s why the kids have been eating so well. 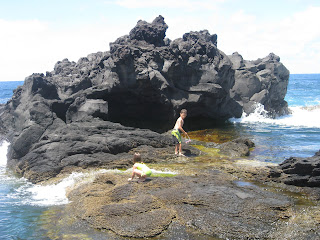 After lunch, we went back to the pools and found an amazing spot which we had to ourselves all afternoon.  It was a set of two natural ocean water pools nestled into the black volcanic rocks, hidden away from view.  As the ocean waves rolled in, the larger ones would surge into the bigger pool, then the water would cascade into the smaller pool and then empty back into the ocean.  The pools were large enough to snorkel in, which we did, and found all sorts of fish, crabs, coral and a bunch of the tiny creatures which resembled mini lobsters.  The water was cool, refreshing and crystal clear, so a perfect relief from a hot day.  Ana and Stella found a nice flat spot on the rocks, laid down some towels, and did a couple hours of sun tanning, while Magnus and I swam around and did some exploring in the rocks, looking for crabs. 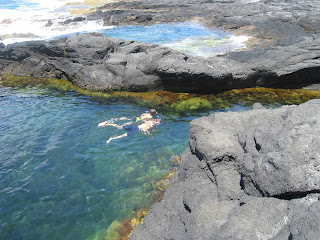 The entire time we were enjoying this paradise, we couldn’t figure out why there were no other people around, but as we left and drove a bit further up the road, we found another natural pool area which is where everybody was, likely because it also had a sand beach, change rooms and a small cafe. 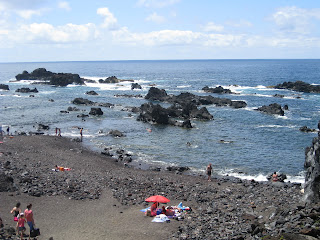 We decided to head back and drove to Ana’s cousin Carmelia’s house, where they were having a big dinner.  Ana’s dad had told everybody that we were leaving on the Wednesday (it’s actually Thursday), probably to sneak in another massive family gathering, so there was a huge crowd, pretty much all the same people who had joined in at the previous feedings.  They have a lovely outdoor dining area and outdoor kitchen and had cooked the entire meal in a wood burning oven.  As usual, there was plenty of food and wine and the dinner lasted until well after dark.  We arrived back at tia Ana’s house feeling well tanned, well fed and ready for bed.

Posted by Kristofor Olson at 11:40 AM