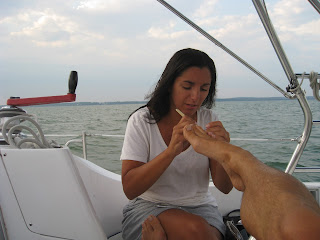 Spending three nights in the same marina was a record for us, so we were ready to move on.  We took off around 9 am, en route for Vermilion, Ohio, which was about a three hour ride.  We had a nice wind and good sail and shortly before arriving at our destination, we pulled the sails down and stopped for a nice lake swim.  Andrew passed us along the way so had the docks organized for us, at the Vermilion Yacht Club.  We got tied up and headed directly for the beach, as it must have been 35 degrees outside, so we were ready to hit the lake.  The club had access to a semi-private beach, which was clean and great for swimming so we spent a few hours soaking up the sun, then returned to the boats to get cleaned up before dinner.

The clubhouse had excellent kitchen and bbq facilities so we hauled our gear there and made a delicious meal.  While waiting for things to cook, we sat on the Adirondack chairs on the front lawn facing the channel watching the boats go back and forth.  Vermilion is probably the most scenic boating town on the entire lake as is consists of a network of channels weaving through the town and is home to many marinas.  To give an indication of the boating culture in this town, the central water tower, which rises high in the middle of downtown, has emblazoned on it the letters “Vermilion Sailors” and an image of an anchor.

After dinner we took the advice of a local boater and walked down to the beach to an area called Linwood, which featured an ice cream shop which quite literally propelled you back in time.  They served malts, old fashioned ice cream, had candy jars with prices varying from 25 cents right down to 2 cents, red upholstered booths, soda jerks, Slush Puppy machines and prices that were simply way too low to be believed.  Outside the shop was a big park which had many kids play apparatuses and a covered area with four lighted alleys of shuffleboard.  And everybody looked to be well off, happy and pretty much exclusively white.  The whole place had this strange, but warm, out of place feel, which started to make more sense as we worked our way through the park and found an iron gate barrier locking out the rest of the city living in present day from this enchanted forest.  As we exited the gates there was a giant sign identifying this as Linwood Private Family Park with access available to members only, or guests of members.  As guests of the yacht club, we were allowed access, but I guess it wasn’t available to the general public.  We talked about this a lot after the experience, and it certainly seems to be the rule that if you have money or status in the US, you get the good stuff.  If you have no money and no status you get the crap.  An ugly truth or just a misguided perception?  All I can say is, I feel lucky we were on the good side of the gate, at least for a little while.
Posted by Kristofor Olson at 10:25 PM