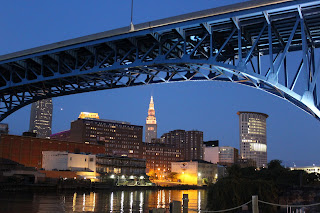 Now well into our homeward bound stretch, we awoke at 5 am and threw off the lines for Cleveland.  The wind cooperated and we cruised down the lake, enjoying a nice ride most of the way.  As we approached Cleveland the wind picked up and a few nasty gusts rocked the sailboat, but she handled it well and before long we were safely tied up at dock at the Edgewater Yacht Club, one we had visited the year before, and had pledged to visit again, mainly because of the large pool which was being constructed.  Well, the pool was all done now, so after getting registered we went down and enjoyed several hours basking in the loungers and playing in the cool water.  I actually crashed out on a chair and, not being much of an afternoon napper, felt absolutely terrible when I woke up.  I took me a couple hours and a nice gin and tonic to snap out of it, after which we had a quick pasta meal then piled into Endeavour for a ride into downtown Cleveland to visit Shooters – the last remaining restaurant/bar from the heydays of the Flats, where the area was stacked with bars, clubs and, sadly, rampant crime which eventually forced the city to close down the entire area.

We enjoyed a few drinks at Shooters, and as we sat were treated to the arrival of a thousand foot freighter slowly and carefully navigating the small channels, which is especially impressive for onlooking boaters, knowing how difficult it can be for moving even small boats around in tight waterways.  After this we went on a nice walk around the area, admiring the amazing infrastructure, from the lift bridges, to the raised highways, to the railway lines, to the winding channels.

After Shooters, we cruised back to the marina, had a nice cocktail and retired for the night.
Posted by Kristofor Olson at 10:26 PM