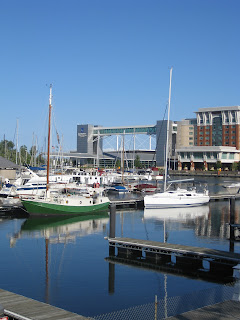 The US customs video phone worked on the first attempt, so I got us registered and returned to the boat, ready to begin the search for a diesel mechanic.  The guy who gave us the tow the night before, came by and gave me a hand with the engine, but we were still unable to get it working so he pulled out his rolodex and started calling mechanics.  After a number of attempts he finally found one who was willing to come by to have a quick look, otherwise the earliest we could get help from the others would have been Monday, which would have really thrown off our plans.  But that’s sort of how boating works, as soon as you get too elaborate with your plans, something will always go wrong, whether it’s a mechanical failure or weather that just doesn’t cooperate.  In our case, the plan was to make a giant run all the way down to the Lake Erie islands, where we were going to meet up with my brother Marty and family.  But now we were stuck in Erie, but as it turns out, Marty and family were going to be passing right by on the way to Sandusky, so we sent them a text and they were able to meet us for lunch.

The mechanic arrived and I joined him below, not wanting to miss an opportunity to learn something about my engine, as I was clearly lacking skills, and if you want to be a good sailor you really do have to know your boat, and be a proficient as possible at fixing things.  Marty, Jen, Leif and William arrived shortly after that, and they all went ahead to the nearby restaurant as we worked on the engine.

After an hour of troubleshooting, the mechanic finally isolated the problem to a blocked fitting in the first fuel filter, and he was able to simply bypass that filter, after which he got the fuel system bled and she started up and ran perfectly.  Eternally grateful, I asked him how much the bill was, expecting several hundred dollars, but he humbly asked for seventy-five bucks.  I gave him a hundred, thanked him profusely then trotted in an overjoyed fashion over to the restaurant and joined the gang for lunch.

We had a nice lunch and visit, then returned to the boat, on the way noticing that the sport fishing boats in the harbour had all returned, and the captains were busy cleaning fish, many of which were ten pound plus walleyes, larger than any I had ever seen.  The ladies and kids went back to the boat and Marty and I took off on a booze run to stock up Bella Blue with cheap US suds.  We returned to the boat with an ample supply, had a quick cigar and beer then we parted company – Marty and gang headed for Cleveland by land and us back on the water aiming for the islands.  We had been in constant contact with our friend Andrew throughout all the drama, as he was in Dover with his boat Endeavour, waiting to see how we made out.  We always do the annual two week boat trip together and are somewhat strange bedfellows as he has a 36 foot Sea Ray power boat which cruises at around 25 miles per hour, compared to our sailboat which does around 7, so he gets from place to place much quicker than we do, though it somehow all seems to work out fine.  He had set out early that morning and was on his way down the lake, with a plan to rendezvous in Middle Bass island the following day.

It was 5:30 when we left the dock, and we would arrive at our final destination exactly 24 hours later.
Posted by Kristofor Olson at 9:53 PM