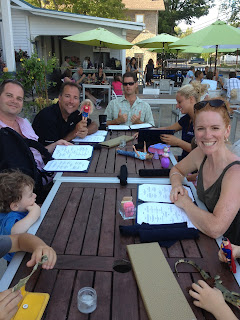 We awoke to another sweltering hot day, so after a quick breakfast, Marty, the kids and I went for a walk before the heat became unbearable.  This when I learned that young William could actually walk in six directions at the same time – in fact I think it would have been easier wrangling a herd of dizzy cows down the sidewalk then trying to keep William walking in one direction.  Leif is another story, he usually goes in a single direction....fast!  So we sent Stella and Magnus running after him while Marty and I double teamed William.

Later that morning, we packed up the boat, filled up with diesel, and headed off sailing for Kelleys Island, putting Marty in charge at the helm.  It was quite a nice sail across, as the wind was co-operating, the waves were small and the sun was shining.  We arrived at the north side of Kelleys, got the boat anchored, then all jumped in for a refreshing swim, which was welcome.  I then got the barbeque set up and we cooked a nice easy hot dog and hamburger lunch, and washed it down with a couple brewskis.  We then sailed around the east side of the island and encountered some pretty big waves, which had been building all day from the constant breeze, and which provided for a pretty rough ride at times.  After an hour or two we pulled up to the docks, got tied up, had a few happy hour wobbly pops with Andrew on his boat, then packed up the team and wandered into town for a walk.  Kelleys Island is less busy than Put-in-Bay so it was perfect for a leisurely stroll through the streets.

We decided to try out a restaurant we hadn’t been to before called Kelleys Island House restaurant and were treated to what was definitely the best meal of the trip.  The food was unbelievable, the service was impeccable, the company was tremendous, prices were good and the laughter was plentiful.  After a long, leisurely dinner we returned the boats, got the kiddies tucked in, and enjoyed the rest of the night on the dock.
Posted by Kristofor Olson at 10:02 PM