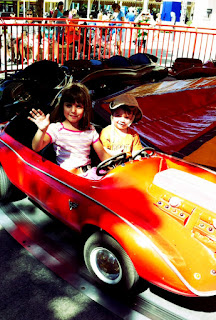 The plan was to leave the dock at 6:30 am sharp destined for Cedar Point amusement park.  We were underway slightly past target, but considering the chaos of organizing four excited kids and four exhausted adults within 150 square feet of closed sailboat cabin, jammed full of luggage, dirty clothes, food, drinks, coolers, books, games and spare parts, I’d say we did pretty good.

Cedar Point is located at the end of a long peninsula which originates at Sandusky, Ohio and stretches far out into Lake Erie, creating a huge natural harbour which can get quite congested and rough at times because of all the boat traffic and swirling wind, and it was indeed rough this morning.  We made it to the docks at Cedar Point marina in under two hours, and were very happy to get registered and tied up.  The park opens one hour early for guest of the marina so we were able to get in by 10:30, which gave us a half hour jump on the big crowd.  We split into two groups – Ana, Jen and the kids then the rest of us, whose mission was to ride as many roller coasters as possible so we head immediately for the Top Thrill Dragster, the second tallest coaster in the world, which is the most terrifying ride I’ve ever experienced.  Sadly, Andrew chickened out of this one so Marty and I got saddled in and heard a loud voice say “Arms down.  Head back.  Hold on.”  The sounds of revving engine was deafening and the inevitable take off came suddenly as the yellow lights counted down to green then the car exploded from a standstill to 120 mph in less than four seconds then shot vertically up a 420 foot tower then straight back down, leaving your stomach contents looking for a fast way out.  All I can say is the experience was intense!

We did a few more coasters then met up with the A team and spent some time taking the kids on rides, then we all returned to the boat and had a nice long, leisurely lunch and a welcome break from the heat.  We then got our swimsuits on and returned to the park, but this time to the water park section and spent the afternoon on water slides, lazy rivers and swimming pools.  The kids had a real blast, as did the adults, and by the end of the day we were all exhausted, though not too tired to have another big meal back at the boat! 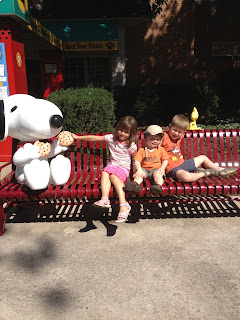 Posted by Kristofor Olson at 10:20 PM