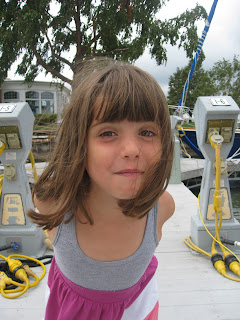 After breakfast on the boat we powered out of the Cedar Point marina across the bay to Sandusky Yacht Club, one of our favourite marinas on the lake, not just because of the incredible restaurant, spotless docks, helpful staff and cheap bags of ice, but also because it’s a prime location for Ascot Spotting, a game we created to keep us occupied and entertained while visiting yacht clubs far superior to our own with members at least half a dozen social classes above us.  You see, this is the most underappreciated aspect of owning a boat, not only does it give you the freedom to travel on your own time, by your own rules, from place to place, but it also allows you to access places you would otherwise not be allowed into; namely – fancy yacht clubs.

Here’s how the game of Ascot Spotting works: first you need a boat, doesn’t really matter what kind but it does have to be nice enough that you are not immediately thrown out of harbour (ie. A 12 foot aluminum fishing boat with a 10 hp, 20 year old Johnson, covered in walleye guts would probably not get you in).  Before you enter harbour, make sure that you’re hung all your wet laundry out on the lifelines, including towels, underwear, dish rags, carpets, and even j-cloths, and try not to let anything fly off on your way in.  One way to do this is to tie the drying items to the lifelines with used bits of string, or whatever else works - if you are looking for ideas get on the internet and google “gypsy laundry tricks”.  Next, when you radio the harbourmaster, avoiding using words such as “fuck”, “shit”, “butthead”, “ho”, “boat fire”, “whisky dick” or any other such vulgarities, especially when referring to his mother or wife.  If all goes well, you will be assigned to a particular slip, but don’t worry about that, just navigate in to wherever the giant boats are located and find an empty slip there.  If none are available, just throw out an anchor, you can float into dock on pool noodles later.

Once you are safely and securely tied up, get all that extra junk cluttering up your boat and throw it on the dock, there’s so much more space out there.  Try to put any spare engine parts in a Ziplock or a plastic grocery bag so you don’t leak too much diesel on the nice composite decking.  Also, if you have your Rottie or Pitbull with you, and you probably do, then make sure you put a rope around their neck and cleat them off to your boat, or probably a neighbour’s boat, as it’s likely you’ll have laundry hanging off your cleats.

Now comfortably settled, the first thing you need to do is to set up lawn chairs right on the dock behind all the big boats.  If the junk off your boat has completely covered the dock, then just take the lawn chairs and set them up on the grass outside the club restaurant.  Alternatively, another excellent place for the game is the club parking lot, but if you do that ensure you take along some sort of canopy, or a paddling pool, as it can get very hot on the asphalt.  In any case, before you get set up, make sure you prepare a cooler with a good selection of hard liquor and jumbo shot glasses – this is a very important part of the game.

Now, the game itself.  The beauty of Ascot Spotting is the simplicity of the rules – anytime you see a man wearing an ascot, you shout “Wanker!” in your best Scottish accent, and everybody has to throw back a double shot.  You get one point for each ascot you spot.  You get a bonus point if there is a 40 year age spread between him and his female companion.  You get another bonus point if he drives an Aston Martin or a Rolls Royce or has a boat longer than 70 feet.  The first one to ten points wins, but you rarely have a winner as you’re normally ejected from the club well before that point.

After a quick round of Ascot Spotting (Jen won), we had lunch in the club restaurant, which is said to be the best restaurant in Sandusky, and we have little doubt of that.  The piece du resistance of the meal was the bread pudding.  It was the most amazing dessert I’ve ever experienced in my life, and rest of the gang at the table agreed.  After lunch the boys went off to stock up on cheap US booze and engine parts, while the ladies took the kiddies to the pool.  After we returned with a booze purchase that took two trolleys to cart back to the boats, we switched with the ladies so they could go grocery and clothes shopping while we joined the kids at the pool and did our best to ignore them and focus on drinking rum and cokes at the pool bar.  We later rendezvoused at the boats, cooked a light supper then finished off the day with an evening happy hour.
Posted by Kristofor Olson at 10:21 PM