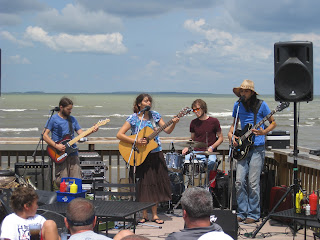 Now that we were back to the core team, and able to cram into a compact, we rented a vehicle and headed out for a day trip.  We sent the chicks to get the car, as they are usually much better able to negotiate prices and upgrades, and were none too surprised to see them pull up in a shiny, black, seven seater SUV, which we didn’t even have to jam into, everybody got a seat including the kids, what a treat!  We head west out of Sandusky and drove to the peninsula of Marblehead.  We did a full circuit of the peninsula, seeing nothing much of interest, other than the Marblehead lighthouse, which is sort of a Lake Erie relic.  We weren’t able to go into the lighthouse as there was a wedding ceremony being performed there, for a gargantuan bride in what we all agreed was the most hideous wedding dresses ever manufactured on planet earth.  Her bridesmaids must have really loved her, or perhaps they were all part of the same clown troupe, it’s really anybody’s guess.

We then rolled on to Port Clinton, which is a small town with a lot of marinas, and the take off point for the Jet Express ferry to Put-in-Bay, resulting in hundreds of macho, muscled, tattooed dudes with vodka sipping bikinied bombshells on their arms, waiting for the next ferry.  We skirted around that chaos and instead found this cool little lakeside restaurant called Dock’s Beach House, whose food was acceptable, but venue was amazing as they were located right next to their own private beach and supplied a live band playing on the giant patio overlooking the crashing waves of the lake.  We were treated to a very talented folk band who sang their hearts out while we flooded our livers and filled our gullets, a lovely afternoon indeed.

After this we did a short walk into the historic downtown, which really didn’t have too much to offer, then hopped in the SUV and cruised back to the boats, quite happy that we have finally seen the area, after talking about doing it on previous trips.

We had a small snack on the boats, then watched a movie and hit the sack.
Posted by Kristofor Olson at 10:23 PM