The Battle of Humour 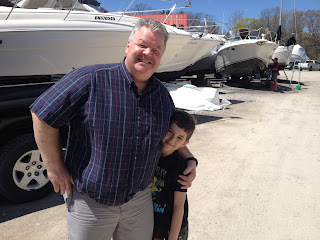 As a parent you are always watching your kids, trying to recognize where their talents lie so that you can encourage them to develop their natural strengths.  A few weeks ago I found myself in awe as my young son Magnus demonstrated a talent which I had not known he possessed.  It wasn't a photographic memory, nor was it mathematical prowess.  It wasn't the ability to play chess masterfully nor a natural talent for a particular sport.  What he demonstrated was an uncanny knack for remembering jokes.  I've known for some time that he is very interested in jokes, as his favorite book is "1001 Jokes For Kids" and both Ana and I are subjected daily to his test jokes.  The routine is like this - he makes up a joke, delivers it, then asks us if it's funny.  They started out being completely unrecognizable as humour, but over the months and years he has started to figure out what makes a joke funny.  Humour isn't exactly something you can teach, it seems to be more of a trial and error skill.  As I sit here typing in our sailboat on a fine Saturday morning, Magnus just this second popped out of the kids' cabin and said, "Daddy, do you want to hear a joke I've been working on?"

"What never gets a sunburn and loves Justin Bieber?"

Pause for evaluation.. After a few seconds I got it.  It's the double meaning on the word "fan".  But Magnus was thinking that if you are fanning your face in the sun it makes you feel cooler but also prevents sunburns.  See what I mean about learning humour - it takes lots of practice.

Back to the story.  My uncle Michael and aunt Anna spent a weekend at our place recently as Anna was involved in a food and wine show in Brantford.  On the Saturday, Stella, Magnus and I took uncle Michael out to Port Dover to give us a hand launching our sailboat.  Because we only had one vehicle, after we sailed the boat from the dry dock location over to our slip at the marina we had to walk a mile or so back to where we left the vehicle.  This is where the now legendary Battle of Humour transpired.

But first, who is this uncle Michael?  Well, he is about the grandest and goofiest fellow you could imagine.  He is my father's brother and from a young age he was the family clown.  He is gifted with a powerful memory for jokes and can usually spin one off for any situation, with the jokes being primarily of the double x, and often triple x categories.  His rapid fire joking had never been challenged...until this day.

As the four of us began our long walk, Michael thought he would entertain the kids with a joke.  He said, "Knock, Knock."

Magnus' ears perked up immediately as he replied, "Who's there?"

Magnus shot back, "What do you call a guy with a car on his head?"

"Jack, " he said, watching Michael's reaction.  Michael grinned.  Magnus showed him some teeth. The battle was on.

Michael volleyed with, "What is green and red and goes 200 miles per hour?"

He thought about it for a minute, then laughed when he got it, then rallied back with, "So what's black and white and red all over."

"Crap," Magnus said.  Then he proceeded with, "Who won the monsters beauty contest?"

"OK, Magnus," he challenged, "where do snowmen keep their money?"

Magnus went back on the attack, "What do you call a fish with no eye?"

Michael waited, unsure of what to expect.

"Nice one," Michael conceded, "but how does a pig get to the hospital?

"In a hambulance," Michael laughed.

Stella and I continued our march up the hill, as silent spectators of the two clowns trying to outdo each other with their witticisms.   The jokes continued, with each fellow matching the other in turn, some funny, some mildly entertaining, and some, in Magnus' case, difficult to figure out, but at no point in the 30 minute walk was there more than a few seconds of silence between volleys.  I knew Michael had a killer memory for jokes, but had no idea of my son's hidden talent.  As we neared the end of our walk, it was becoming clear that the two combatants were starting to run thin on rib ticklers - they had probably told 25 jokes apiece.  Aside, Michael admitted to me that he had plenty more material, but none suitable for the present crowd, and was indeed running out of jokes.

With a sparkle in his eye Magnus asked, "What did the grape do when it got stepped on?"  He immediately continued, no longer interested in waiting for the response, "It just let out a little wine."

Michael, inspired with a final effort said "Two peanuts were walking down the street, one was a salted."

Magnus, digging deep, rallied back with a joke that I'm quite sure he made up on the spot.  He stared Michael in the eye and said, "What does a cow say when he's eating popcorn?"

With that, Michael conceded the battle to the young jester, making Magnus the winner and the proudest little boy in Canada!


Posted by Kristofor Olson at 9:32 AM