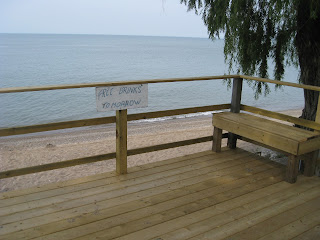 Shortly after 4 am we left the dock and were on the lake, headed for Pelee Island, roughly 55 miles south west of us with a strong south west wind directly in our face.  It was a very rough ride but Bella Blue did well slicing through the wind and crashing over the steep waves.  Sadly, the crew didn’t do quite as well as both Ana and Magnus were immediately sea sick and spent the entire ride laying down, trying to keep their insides inside.  Magnus did have a brief vomiting episode but did feel much better afterwards and went back to eating his toasted bagel as if nothing had happened.  Stella was fine the whole way through, just a little bored with the long ride.

Around 12:30 or 1:00 we arrived at Scudder Marina, located on the north end of Pelee Island.  This island is home to Canada’s southernmost point.....and not much else.  As we would soon discover, compared to the US islands only a few miles to the south, Pelee Island leaves much to be desired.

We had been in touch with Melissa and Chris via text messages along the way and they arrived by ferry to the west side of the island around noon and planned to hike the six miles up to the marina where we would meet.  So after our arrival we went for a short walk around the docks and found an impressive population of Lake Erie water snakes living on and amongst the rocks.  Some were as large as six feet long, while others were less than a foot, so not sure if they were different species or just a momma and baby thing.  Magnus has always been terrified of snakes, so I was surprised when he was keen to get a closer look at them.  Stella, him and I crawled around on the rocks to have a good look and snapped a few photos.  As we were poking around, Melissa and Chris appeared on the horizon, lugging backpacks and sweat stained from pits to ankles as the day had become very warm indeed.  We guided them over to the boat where they got their stuff unpacked into the v-berth which would be their home for the next couple nights.  I was overjoyed to see Chris whip out a couple dozen tall boys of various varieties and we found a suitable place for them in the cooler.  I had kept my beer supply to the absolute minimum in anticipation of picking up some cheap US suds, and there was barely any left so this was a welcome addition to the supply.

After a couple drinks we went for a walk to find the bakery which, we were told, was a mile down the road.  Along the way we encountered some beautiful little lakeside cottages, some of which had their own secluded beach areas and decks overlooking the bay.  We found the bakery, ordered up some fresh bread and snacks, and our guests bought the kids two bags of those little flavour-packed jelly beans, which became the fuel for an extended game of “close your eyes, open your mouth, chew the jelly bean I toss in there and guess what colour it is.”  Nobody was particularly good at it, though I think Ana got the most right.  They all tasted like lime to me.

We slowly wandered back to the boat, along the way passing a school, in front of which was a big sign saying, “Warning - No Hunting - School Zone ”, making us wonder why you would need to remind people it’s not a good idea to sqeeze  off rounds in a schoolyard.  As we returned to the dock, we found it so hot and muggy that we took the boat out to the  middle of the bay, cut the engines, and jumped in for a cool, refreshing swim that actually turned into more of a community bath after Ana brought the bath gel up.  Sadly, Melissa wasn’t able to partake, as the day before leaving on their trip she had broken a coffee carafe while washing it and sustained nasty and deep cuts on three of her fingers.

After returning to the dock I got the grill fired up and barbequed steaks and Portuguese chorizo for dinner.  Despite the full bellies, we manage to stay up for a while chatting but eventually we pack it in and hit the beds, all of us exhausted after a very full day.
Posted by Kristofor Olson at 11:06 AM