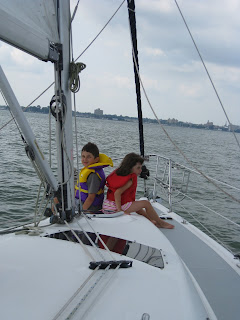 We head out early as the forecast was calling for heavy winds later in the day.  We sailed to Sandusky, which took a little over two hours, and got a slip at one of our favourite marinas – the Sandusky Yacht Club.  It felt very strange being in a slip without Andrew’s boat Endeavour beside us as we’d jointly discovered this lovely location and had many a fun evening here.
The Sandusky Yacht Club has the best restaurant in the city and we happened to arrive on buffet Wednesdays so tied into a delicious, gigantic lunch which was followed up with a giant helping of their signature dessert dish – bread pudding.  You have never experienced bread pudding until you have tried the SYC version.

Once again, we had great timing as we noticed the skies outside darkening, wind whipping up and weather warnings appearing on the television.  We decided to do a quick run to the grocery store before it got really nasty, as we were running low on non meat consumables.  We got soaked running there, and a minute after we arrived to the store we heard warning sirens going off and a weather warning on the radio advising that a tornado warning had been issued for the Sandusky region.  The staff told us we better get back to shelter quickly so we did a ten minute speed shop, then bolted back through the streets, keeping our eyes peeled for funnel clouds.  All the talk of tornados had Stella terrified so she was bawling as we ran across the parking lot and finally into the safety of the yacht club.  We ordered some drinks and watched the weather channel which showed the tornado touching down east of Sandusky and causing all sorts of damage.  The winds had picked up to 80 mph so it was a very nasty, though fortunately, short lived storm.

We spent the rest of the afternoon on the boat with Ana taking full advantage of the laundry facilities and doing laundry runs back and forth while the rest of us spent the time relaxing, reading and playing games.   Evening was equally slow, we cooked a great dinner, watched a movie then crashed out hard for another uninterrupted boat sleep.
Posted by Kristofor Olson at 5:02 PM