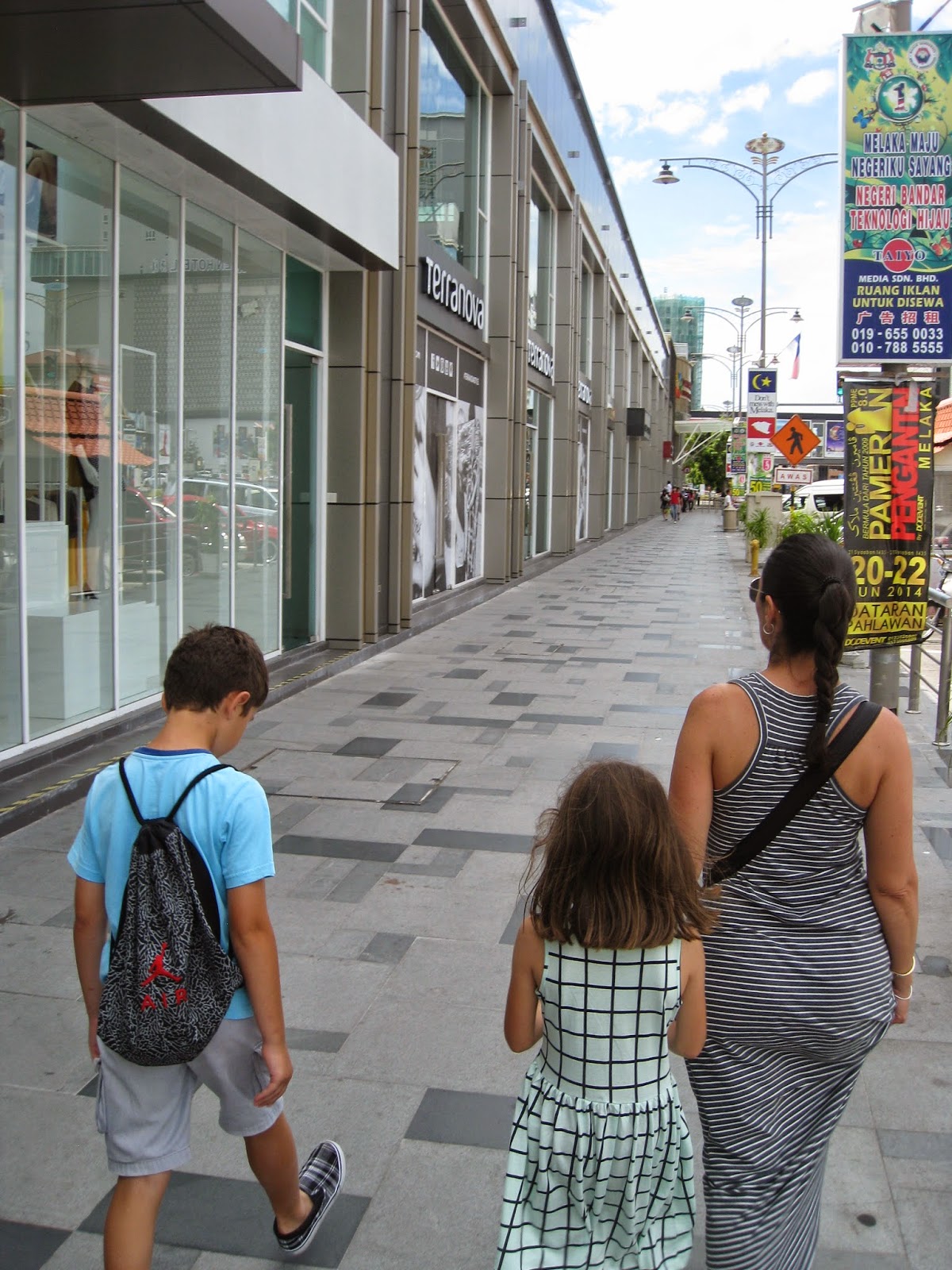 After a glorious sleep in our luxury hotel room, we came down for our free breakfast and found the most amazing spread you could imagine.  They had the regular breakfast stuff such as eggs, beans, toast (actually they had bread that was coloured green, felt like I was in a Dr. Seuss story for a moment) and potatoes, but also some more interesting things like giant pots of rice, chicken curry, fish sauce, lobster balls, many types of noodles, soup, bread pudding and fresh mango and guava juice.


We set out on a similar route as yesterday, but instead of following the river veered right in search of one of the two Unesco World Heritage sights in Melacca.  It was still quite early so there wasn’t much activity, but it was a perfect time to explore the area, which was filled with architectural treasures.  One shop that was open was the Durian Puff Shop.  They sell these puff pastries which contain a deadly custard made from the durian fruit.  These are the fruits which are basically banned from all public places because they smell so bad.  I decided I had to try one and convinced Ana to experience it with me so we bought two of them, noticing the sign which said “One bite, All in, No chew”.  Thankfully Ana ignored the instructions and peeled off a small piece, dipped it in the custard and popped it in her mouth…then nearly hurled.  I decided to do a similar test and ate a small piece which tasted like pure ass.  Stella even dipped her finger in and tried a bit, but Magnus was already sprinting down the street after seeing our reaction to the pastry.  I disposed of the remains in the closest trash bin I could find and we agreed that this was one acquired taste we were not going to pursue.


As we were getting increasingly overheated we came across a free museum with air conditioning so immediately slipped in for a short reprieve from the blazing hot sun.  This particular museum was dedicated to the history of the Malaysian Customs and Immigration department and may well be one of the top ten most boring museums in the world.  One of the exhibits was the plain black desk and chair of the director who ran it from 1985 to 1990.  Another was a small knife and toy gun that was confiscated in 1974.  Another small case contained a cache of confiscated alcohol which included one Tiger beer, one Carlsburg, a bottle of Jack Daniels and a bottle of wine – this would have made Al Capone’s bootleggers green with envy.  The most controversial one was a glass case which held three female mannequins (probably from Sears) that were sexually suggestive (they had tits) and were confiscated because they could lead to the corruption of society.  The exhibit concluded with portraits of all the directors of the department over the past hundred years, and by that time most of the sweat marks on my shirt had vanished so it was time to get back out in the exciting heat.


The geography of Melacca’s centre is confounding.  After wandering around for a while (we actually saw a huge monitor lizard in the river, then watched him crawl up on the bank – kids loved it!), we ended up on a giant street that was supposedly near the ocean, though we couldn’t see any water.  We walked down the street and soon encountered four gigantic, air conditioned malls.  Ana’s eyes lit up.  The malls were incredibly large, full of people and sold anything you could imagine.  We spent a couple hours browsing around, had some lunch, then headed back to the hotel and went for a glorious swim.  We met an American man and his son and the kids had a great time playing together in the pool while he gave us some great tips on places to see in Malaysia.
We gathered up the leftovers from lunch and some rice I had bought for the bus trip, and whipped up a backpacker dinner in our room then retired early after a very full day.
Posted by Kristofor Olson at 6:21 AM