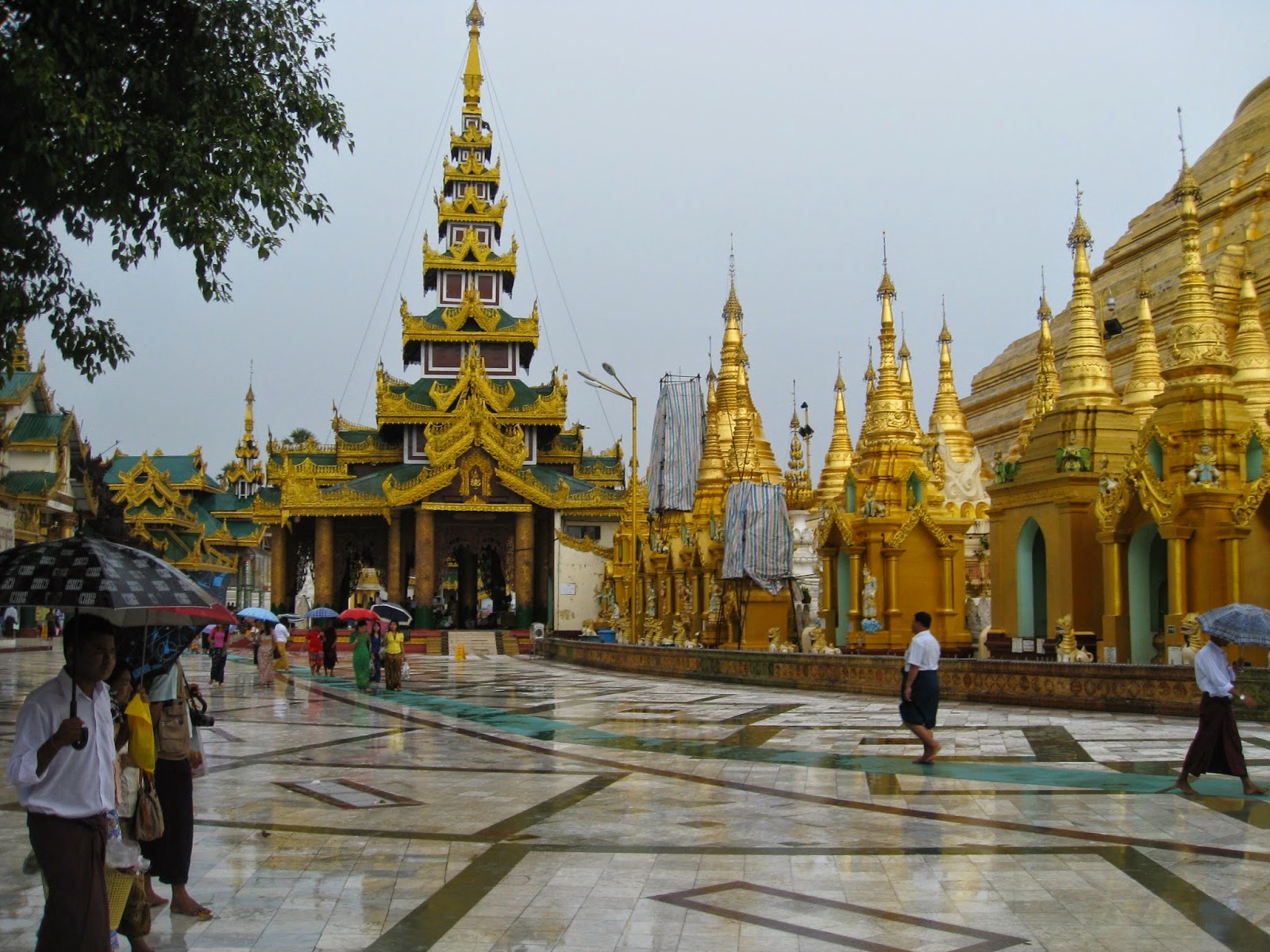 I awoke early, grabbed the computer and went down to the lobby to have a coffee and do some writing.  It was quiet, except for the one Chinese looking fellow who was sitting across from me labouredly hacking up phlegm balls then walking over to the lobby door, opening it and hoarking the gobs onto the sidewalk.  He would then sit down and stare at his smartphone as he worked up another goober, then would loudly repeat the process.  We’ve learned on this trip that Asians sure love hoarking up loogies and spitting on the ground for everybody else to step in.  Yuck.

After rousing the troops, we went down for breakfast, which was pretty good, then headed off to tackle Yangon.  We worked our way towards the city centre and found a busy, bustling city jammed full of people and traffic.  Though there were a few smartphones around, they still have the streetside vendors who have landline telephones you can rent for a few minutes to make calls which is quite a change from the other countries around here – such as Malaysia – where they surgically attach a Samsung Galaxy smartphone to every child’s right hand when they reach the age of 9.

In the centre we found a few grand, amazing buildings including a 2,500 year old temple right in the middle of the largest roundabout in the city.  We decided to go to have a look and after paying 2 USD each (only foreigners pay, locals get in for free) we wandered around and found really not much of interest.  On the way out we had to pay another buck to the lady who watched our shoes that we had to leave behind, then spent another buck to liberate one of the caged birdies that a different lady was holding captive.  The idea is that by buying a bird and releasing it you are awarded with a bit of Buddhist karma which will balance off a bad thing you may do later, such as writing that the 2,500 year old temple in Yangon really sucks.

We walked over to the nearby travel agency where we had to pay for and pick up our bus tickets to Inle Lake.  After this initial look at Yangon, we decided to expedite our departure and changed our tickets on the overnight bus to leaving this evening instead of the next.  There were about five girls working at this agency, all who were smiley and very helpful.  We also found that this is the first place we’ve been to on this trip where the locals on the street pay attention to you as a foreigner.  There were so many times during our walk that random people would either smile broadly at us, stop to talk, or come over and touch the kids and tell us how beautiful they were.  And they call Magnus “boy” while they use the word “baby” for Stella!

We jumped in a taxi and sat in a traffic jam which seemed to last forever, but finally made it to the Shwedagon Pagoda, which is the largest and most sacred Buddhist temple in the country.  Though the Lonely Planet guide said the entrance fee was five dollars (we discovered soon that this most recent guide to Myamnar is hopelessly out of date and much of the information is incorrect) we found out it was eight dollars for each of us, and Ana and I each had to purchase a skirt to cover our legs right to our feet, which were five bucks each.  The sticker shock was too much for Ana (especially since we just paid to see a crappy temple) so her and the kids went to a nearby park to wait for me while I went in.

Well, the pagoda was remarkable and I don’t think I’ve ever seen so much gold in my life!  There is a giant, 350 foot golden dome in the middle which is surrounded by dozens of individual temples and prayer areas.  There are images of the Buddha everywhere you look and hundreds, if not thousands of people praying.  Shortly after I entered it began to pour and I mean really pour.  The water was coming down in buckets, and in one spot the water rushing from a higher part of the ground surface created a small river several inches deep cascading over the tiles.  I would rush from one covered temple to the other, look around for a while, and then sprint through the rain to the next one.

I joined the rest of the family at Happy World – a small amusement park next door to the pagoda and the kids played a few games, tried a ride and we rented paddle boats on the small lake.  We had a quick, terrible lunch at a café in the park, then returned to the hotel, had showers, and grabbed another taxi to the bus station, which ended up being way out of the city and with the terrible traffic, took us over 90 minutes to get there, but somehow only cost six bucks.  The terminal itself was basically one long, dirt covered, grimy street with vendors, people and busses coming and going.  We met a lovely Burmese family and Magnus and Stella gave their children some of their toys, which made them all very happy.

The bus arrived and was a real beauty with reclining seats and individual seatback televisions that played cartoons on one channel and non-stop English adventure movies on the other two.  I watched the third Indiana Jones movie and made it partway through the fourth one then was out.  Magnus also fell asleep early, but I remember waking up around 2 am and looking over to see him sitting there pie-eyed watching “The Mummy”.  He claims that he stayed up all night and watched the whole trilogy!
Posted by Kristofor Olson at 9:24 AM