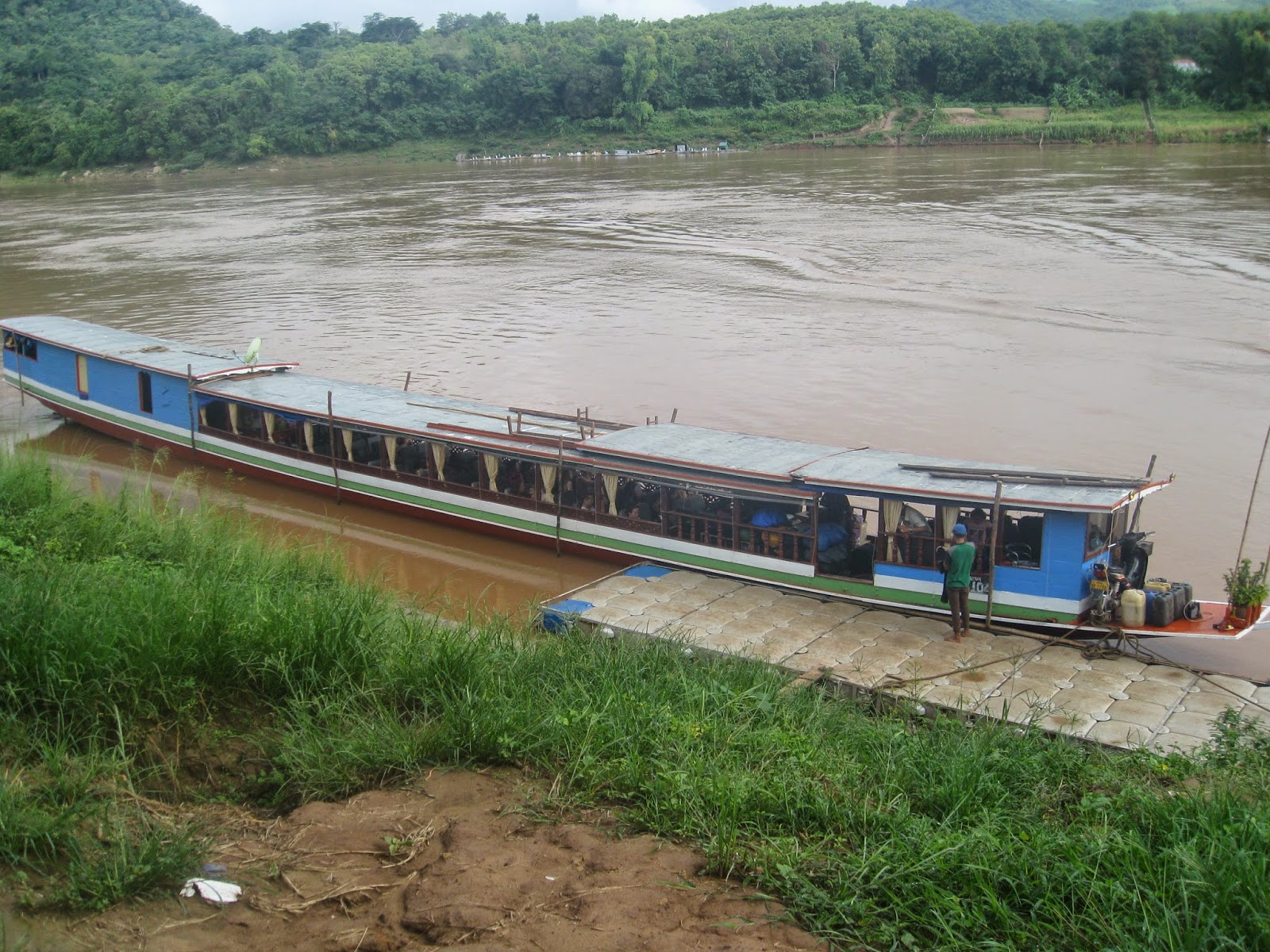 One of the things we had to give up to take this trip was using our sailboat for the season.  We took the opportunity of some boat time by booking a two day trip on the Mekong River which runs upstream from Luang Prabang to Huay Xai, which is on the border with Thailand.  The Mekong River is one of the largest river systems in Southeast Asia and still serves as a primary method of transport, especially for some of the villages which are not served by roads.

The “slow boats” as they are called are unique – probably at least 150 feet long on average with a steel hull and passenger seating for 80 to 100 people.  At the stern of the boat is the living quarters for the family which lives aboard and operates the boat.  Next is the engine room with a large, inboard diesel - likely around 150 HP.  Ahead of this is a small toilet facility, then a kitchen where simple snacks and cold drinks are available for purchase.  Beyond this is the passenger seating, which seemed to be scavenged min-van seats all lined up on either side of the boat, but not bolted down, so could be moved around or completely turned.  Some of the boats we saw had a different configuration, such as permanent tables and seats – more like restaurant seating – but ours did not have this.  At the bow of the boat was an area to store baggage, then a small wheelhouse where the helmsman piloted the vessel.  Both sides of the boat were open, which provided for a constant, cooling breeze, but also installed were curtains and plastic covers which could be rolled down in case of heavy rain.

Overall, it was a lovely boat and perfect for an epic jungle journey!  We were picked up by tuk-tuk at our guesthouse at 7:30 and whisked off to the main jetty, which was only a few miles out of town.  We climbed aboard our boat, claimed seats, settled in for the ride, and were soon off carving through the turbulent waters, after the skilled captain expertly navigated the boat out of the jetty in a strong current.  It cannot be easy piloting such a long vessel as the sole control is the single rudder at the back of the boat.

The Mekong River is the colour of chocolate milk and looks extremely dirty, but is likely not.  I suspect the colour is leeched in from the soil, as the small sections of ground we can see (there is vegetation growing everywhere so not much dirt is visible) is a dull red colour.  There are huge, glistening, black shanks of rock that strike out from the river bottom, reaching up twenty feet or more, and appear sometimes in the middle of the river or sometimes closer to the banks.  There are large and small islands, some with beaches, some just rock and others covered in vegetation.  The current is strong and creates giant whirlpools that collect and swirl all the debris floating down the river, like palm leaves, bamboo poles, ripped fishing nets, plastic food containers, empty Beerlao bottles, packaging, dead fish, tree trunks, and all varieties of human litter.  How the captain was able to consistently navigate this enormous boat around all the whirlpools, shallow spots and rocks is a mystery to me, but he did it well.

The banks on both sides of the river were consistently green.  About a thousand different shades of green.  We would occasionally pass small villages – not as many as I was expecting – and each one featured a sizeable gang of small naked children leaping off the bank into the water and waving happily at the passing boat.  We saw animals, limited to cows, some kind of water buffalo, and goats, but unfortunately nothing as exotic as snakes or monkeys.  There were many, many sand beaches and small dunes on the shoreline and the island outcroppings.  Because of the fast current and many landing spots I was expecting to see adventure seekers paddling on kayak or canoes, but I noticed none of these, though there was a fair bit of motor boat traffic.  The other transport option was taking a speedboat, which gets you there in a fraction of the time, but is much more expensive and apparently these daredevils have a terrible safety record.  Many of these boats zipped past us, some headed upstream, some downstream, all at a blisteringly fast pace, and the driver and passengers all wore lifejackets and, in some cases, motorcycle helmets and face shields.

Passing the time was not difficult – we simply enjoyed the scenery, read, played card games, wandered around the boat, ate snacks, and visited with fellow passengers.  We reached the midway point at around 5:30 pm – a village named Pakbeng, which was a transient town full of nothing beyond guesthouses, restaurants, bars and small shops selling food.  We found a place to stay, went out for a lackluster meal, and then retired after a long, soothing, yet somehow exhausting day on the river.
Posted by Kristofor Olson at 8:39 AM