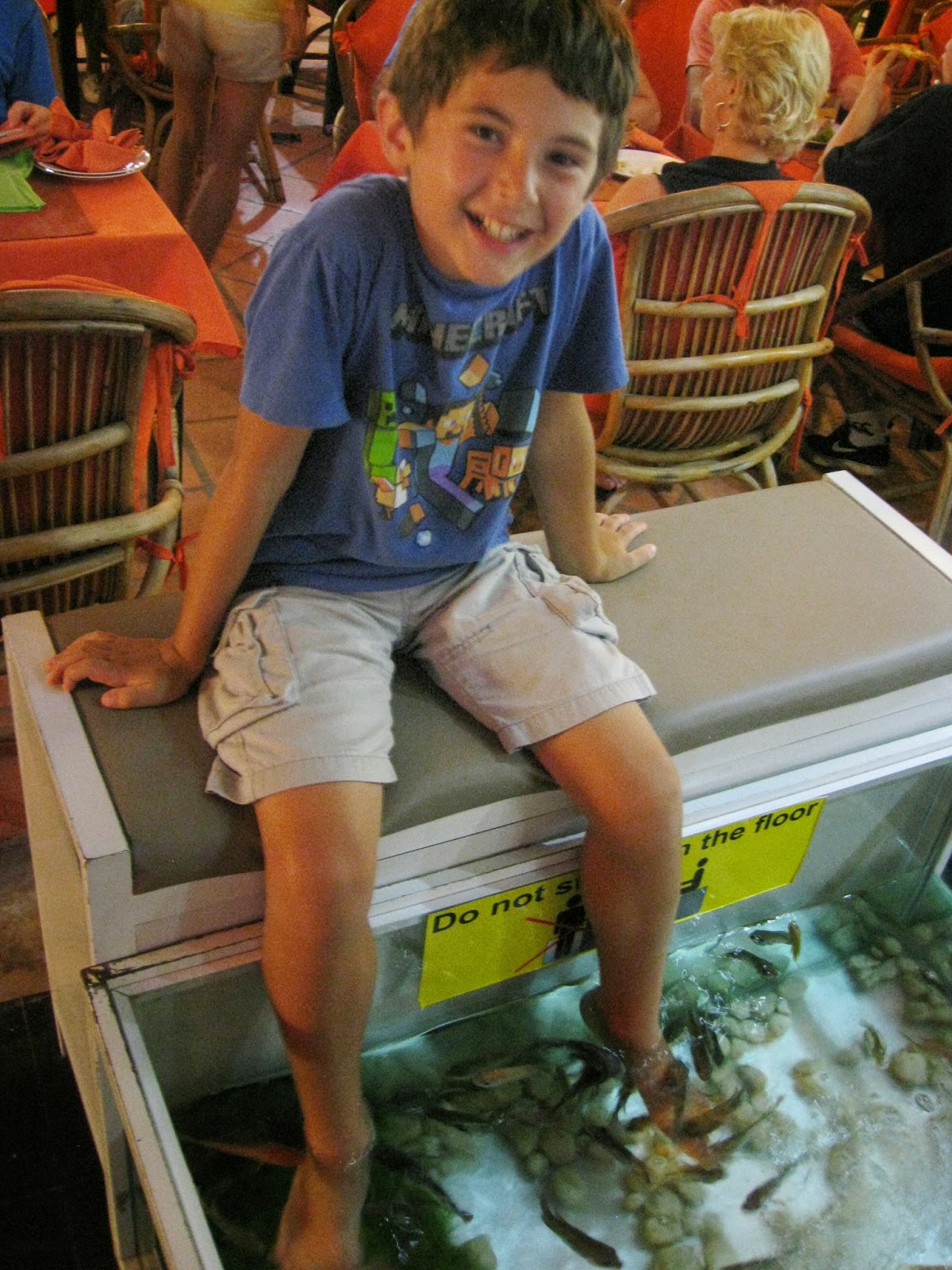 For our second day at the temples we chose some of the less popular and less restored ones.  When Angkor was discovered (or really, “re-discovered”) in the 19th century most of the temples were in ruins as they had been left to rot in the jungle for centuries.  Once the potential of the site was realized, the process of restoration began and has been ongoing and will continue indefinitely.  The restorations are funded by many international organizations and countries and are physically done by teams of locals and foreigners and take many years, or in some cases, decades.  One of the temples we visited was in quite poor condition, but because of that (additionally there were very few tourists at this one) it was one of the best sites and most enjoyable, because we really could imagine we were discovering it for the first time.  Because the ceilings had all caved in there were huge sandstone blocks, some of them with intricate carvings, scattered all over the site making it very raw and very real.

I must say I am reluctant to say too much about Angkor.  I am not usually short of words, but in this case, it is just such a remarkable place that nothing I could write would do justice to the sense of awe and wonder that hits you when exploring these inspiring places.  It is a place you could never prepare for and will never forget.

By the fifth or sixth temple, the sky was clear and the sun was raging so we decided to call it a day and were back at the hotel by 1pm for a nice backpacker lunch and swim at the pool.  I actually went for a workout at the hotel gym and found a Dutch variety show on television that had some of the worst singers I’ve heard for quite some time so it was not a long session.

At 5 pm I jumped on my bike and went to collect the laundry I had dropped off at a local place the day before.  For the first three weeks of the trip Ana insisted on hand washing all our clothes in the hotel sinks with shampoo, then hanging the sopping wet items all over the towel bars, shower wall, chairs, tables, doorknobs, balcony, televisions and any other above-ground object that had a corner.  It basically looked and felt like living in a goddamn gypsy caravan.  When the time came to leave the hotel, if the clothes weren’t dry, she would get the hotel iron and spend a few hours steam-drying everything while the rest of us watched tv or slept.  Or sometimes I would enjoy a beer or two on the balcony but I had to stand up because there was underwear hanging all over the chairs.

She claims that it’s because she doesn’t trust anybody else with our clothes, but I think she is just super cheap.  And there’s this Portuguese thing where the women don’t know how to relax so they spend all their free time cleaning stuff (clothes, shoes, floors, couches, the cat, etc) and when the cleaning is all done they pluck hairs out of their face while waiting for some more dirty clothes to appear.  The kids and I did what we could to make her clothes washing routine easier, for example only changing our shorts weekly, but after weeks of this ridiculous routine (“Kris, we need to get back to the room so I can transfer my moo-moo to the sunny side of the balcony”) I finally demanded that we take a load of dirty clothes to a local place so once I wrestled a few items out of her grasp I ran to a laundry, dumped them off, then returned to report that full laundering costs a dollar a kilo.

Well, the clothes came back perfectly clean, nicely folder and enriched with an enchanting scent of lemongrass or something like that.  She was thrilled with the results, and a whole bag only cost a few bucks so since then our life has been much easier and I’ve been able to actually sit on a balcony chair while enjoying a beer.

We took our final death-defying bike ride back into the centre and I found a nice streetside café to drink a couple beers while the rest of the gang wandered through the old market to look for bargains.  On the drink menu the first two items listed were Angkor beer and Anchor beer, both at a dollar a glass.  Now since these two words sound virtually the same, and Cambodians don’t generally speak English that well, I have no idea which one I got, but any beer you pay a buck a mug for is tops in my mind.

Stella got sick of shopping so came to join me while Magnus and Ana continued their wanderings in the market.  As we sat enjoying our cold drinks Stella spotted a bug vendor across the street so I walked over and bought a small bag of bugs.  We got three deep fried frogs, six deep fried crickets, and two big deep fried grasshoppers.  The vendor boy showed me how to pull the end bits of their back legs off (too crunchy to eat) then gave it to me and ordered me to eat it, which I did.  I know the idea of eating bugs sounds gross, but these bugs are deep fried, obviously for a very long time, because there is really no juice left in them and they taste quite like a dry, salty nut (with wings).

I brought the bag back to the table to proudly show off my purchase.  Though initially eager to try a cricket, upon closer inspection of the creature Stella’s resolve began to waver.  I showed her how to pull the back legs off then I ate one, and found it to be tastier than the grasshopper.  By this time Ana and Magnus had returned and Magnito eagerly grabbed a cricket, ripped it apart then asked me which part was better – the head or the ass.  I told him to eat the ass.  He did.

I handed Ana a cricket but, like Stella, her early indications that she might be up for it were shattered when she actually touched the bug and visualized popping it in her mouth, then it was a non-starter.  I ate the crunchy legs off one of the frogs, and those were actually the best of the lot as they were a bit meatier and tasted like fried chicken.  I urged Stella to try these, and she was able to muster up the courage to lick one of the legs, which was good enough to make it into her daily journal!  Later on in the night we discovered fried tarantulas, water bugs and cockroaches, but I took a pass on these, though we might have another go at it later in Thailand.  I’d really like Stella to eat a cricket.

Siem Reap truly explodes at nighttime.  As we wandered the streets we found multi-coloured neon signs (PUB STREET! NIGHT MARKET!), at least a hundred restaurants, thousands of locals and tourists having fun, live music, tuk-tuk drivers looking for business, streetside vendors selling everything from dried fish to Rolex watches, little kids running around and plenty of free agent dogs roaming the busy streets looking for action.  We chose a restaurant at random, sat down, ordered drinks, then simply watched the party unfolding around us.  Shortly after our food arrived, Magnus pointed up at the wall and said, “Look, two chee-chucks are getting ready to do battle!”  They were getting ready to do battle all right, of the male/female variety.  So together as a family we watch a frantic, speedy session of gecko sex, and as they were going at it, Ana noticed a gigantic toad at her feet similarly looking up to get a view of the action.  Now this is the kind of entertainment that is just not available in Canada!

After finishing our delicious meals we wandered back to one of the many fish spas as Magnus was eager to try it out.  So he jumped up on the tank, dangled his feet in, and let those hungry little fish go to work nibbling his feet and toes.  I don’t think they truly are able to eat the dead skin off your feet as the little fish don’t have any teeth so they are probably just sucking off whatever crud they encounter, which was surely plentiful on his feet as he’s been wearing this closed in loafers with bare feet every day, so now his shoes and feet smell so bad he has to wash his feet before he’s allowed to stay in the hotel room at the end of the day.

During the suicidal, frantic pedal back home, narrowly avoiding collisions several times, we saw a car smash right into a motorcycle knocking both guys off and nearly squashing one of them.  Fortunately, we made it back in one piece and returned to our room tired, sweaty and exhausted after one action packed day on the road.
Posted by Kristofor Olson at 10:46 PM