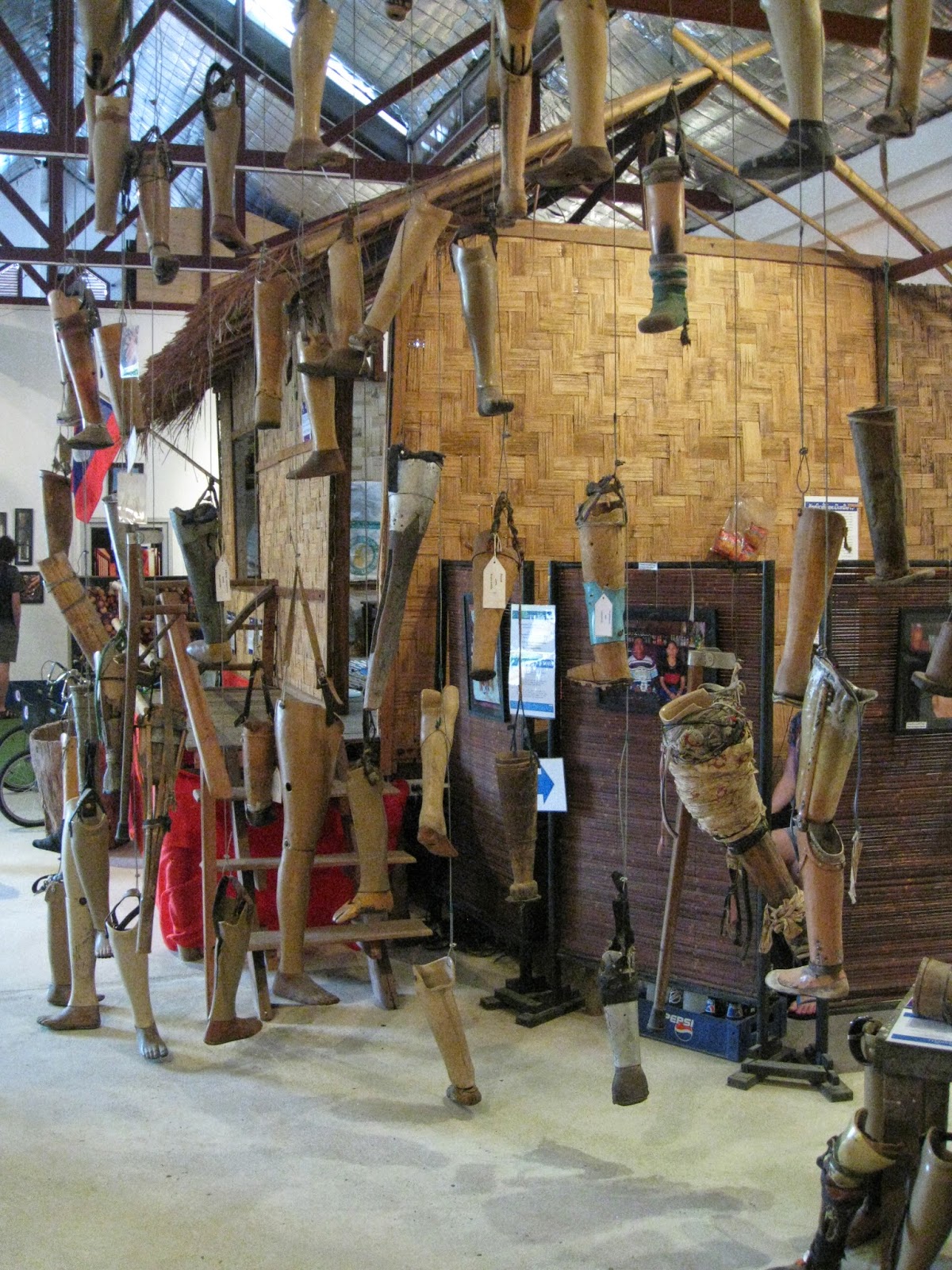 At 4:30 am we were met by our taxi driver outside the hotel and he drove us to the airport for our 7:30 flight to Vientiane.  As expected the airport was huge, ultra-modern, well signed and very easy to navigate.  We have had an excellent introduction to Malaysia and seen a fair bit of the country, but left much more to explore on a future trip.

We landed in Vientiane, the capital city of Laos, which is the only landlocked country in Southeast Asia and bordered by China, Vietnam, Cambodia, Thailand and Burma.  It seems that we have dropped into backpacker land, as we saw more western travelers in the first hour than we saw the entire two weeks in Singapore and Malaysia.  After getting settled into our room at The Garden Hotel, we went out for a walk to find someplace for lunch.  It was not hard finding a restaurant, just steps down from our hotel was Ray’s Grill, a small burger joint run by….Danial!  We piled into a round of the most delicious hamburgers and French fries you could imagine and, after two weeks of rice, curry and noodles, even I will admit that it was a welcome change.  During lunch we met the first Canadians we have come across during this trip – a young couple in the midst of a three month journey covering at least a dozen countries.  We had a nice chat with them over lunch then they headed off to the bus station to catch a ride to Vang Vieng, the next major stop north on the backpacker circuit.  This may surprise some, but I fully expect to see them again somewhere in Laos.

Backpackers tend to follow a very similar path in most countries and there have been countless times when we have recognized people in travels from “one or two countries back”.  In fact, when we were standing on a busy street corner in KL, Ana pointed out two guys from the Perhentian Islands that were at the table next to us during one of those fantastic evening dinners on the beach.  This happens all the time, so it doesn’t even really surprise me much.  One of chapters in The Found Vagabond talks about the coincidences you will experience while on the road, and to me this is one of the greatest joys of travel – making those personal connections and looking for the inevitable links you have with the people you meet.

We spent the afternoon wandering around exploring the town.  There is a much different vibe here, less chaotic and busy than Malaysia, and such an amazing variety of restaurants and bars, no doubt there to service the traveler crowd.  At one point, we were passing a shop and I noticed a brand new, fine looking car but didn’t have a clue what sort of brand it was.  Upon closer inspection…it was a Tesla model S!  Of all the places in the world to come across the first Tesla I have seen, it was Laos.  One of the servers there let me take a couple pictures and told us it was the only one in the country, though we were told later by another guy that there were dozens of them here.


In our wanderings we came across a history museum, so Magnus and I went in while the ladies went exploring the shops.  We learned that Laos has a very difficult history.  It seems they have lurched from conflict to conflict for most of the 20th century.  There is also a huge variety of ethnic groups in this country, in fact over 40% of the population doesn’t even speak the official language.  It is also a very poor country and most of the population lives well under the international poverty line.


We met up with the girls for some cold drinks then caught a tuk-tuk to the COPE museum (http://www.copelaos.org/) which is a facility where they build prosthetic limbs and offer rehabilitation to people who have been disfigured by any of the millions of buried cluster bombs which are scattered all over the country.  The visitor centre had a shocking display of what was done to the country by the Americans during the Vietnam war.  They did a secret bombing campaign of over half a million missions dropping over two million tonnes of bombs over a period of nine years.  About 80 million of these failed to explode, and since then over 12,000 people, mostly children, have been killed or maimed by these bombs.  I felt physically sickened after going through the museum and watching a documentary on the bomb removal process and the massive impact these unexploded bombs have on the population.  It is hard to believe the horrors which were done to this country during that time, especially as they were officially neutral during the conflict.  Canada recently resumed some funding for the bomb removal operations here, which I suppose is a step in the right direction.


In the evening we went out for a lovely dinner, and then took a walk through the night market which is set up alongside the banks of the Mekong River.  But poor Stella was so tired, she could barely keep her eyes open so we decided to call it a night and continue our explorations tomorrow.
Posted by Kristofor Olson at 8:34 PM