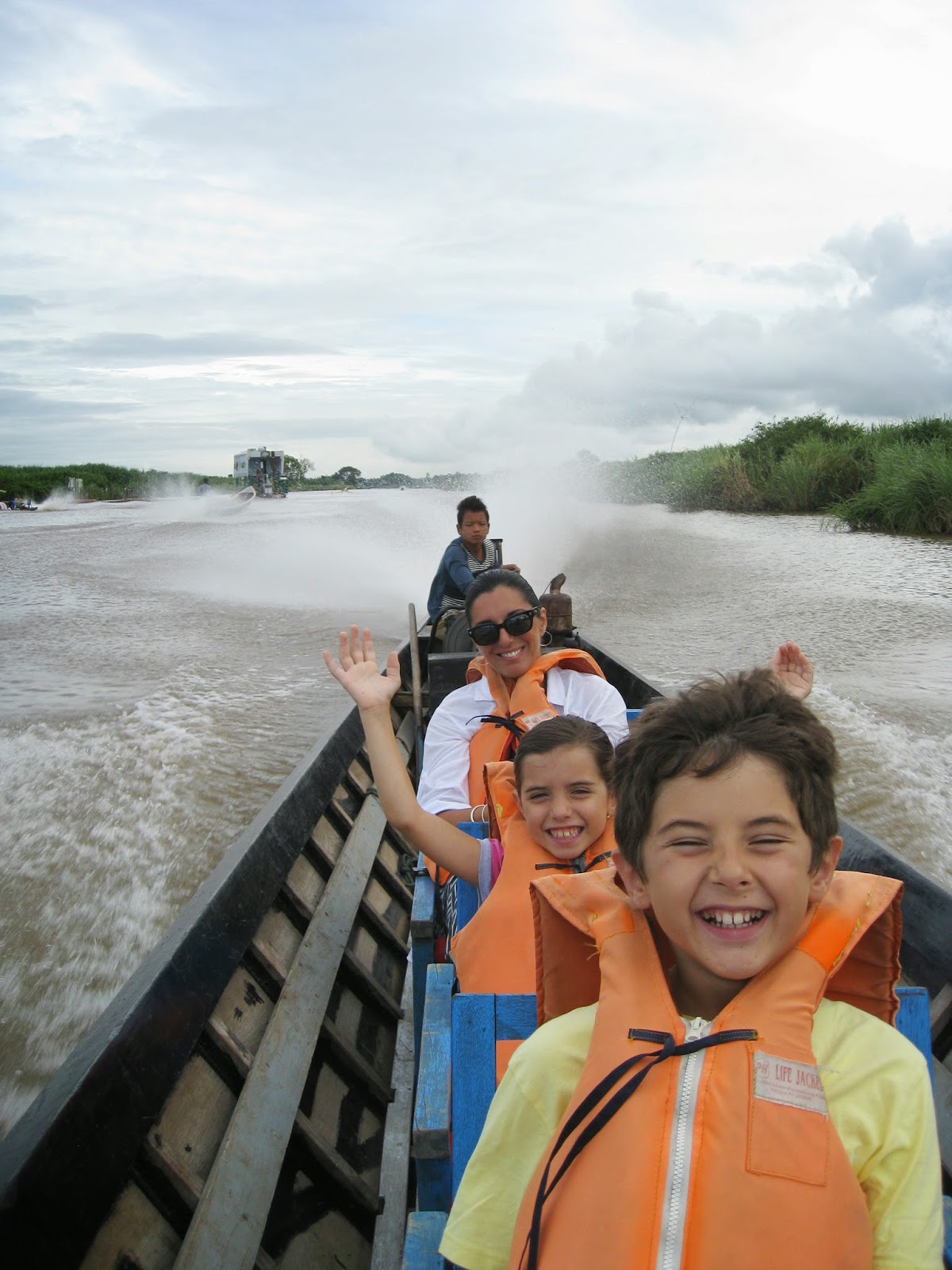 We arrived at about six in the morning after a bumpy, but uneventful overnight bus ride, but didn’t have a clue where we were.  The guidebook made it sound like the bus dropped people off at a junction quite far away from the town we were going to, called Nyaung Shwe.  There was a tuk-tuk there who knew our hotel and said he would take us there for four dollars so we, along with several other tourists, jumped in and were then told that we had to buy a tourist ticket for the Inle Lake area which was 10 USD each.  Once we paid all that, we took off down the road, only to be dropped off at our hotel which was two blocks away!  Scam artists.

Our hotel was called the “Hotel Amazing Nyaung Shwe” and looked absolutely lovely.  We checked in but were told the room was not ready so went to their open air patio where they were serving breakfast.  As we were eating, one of the staff members came over and told us we had to pay an extra 20 USD per night for the kids.  We pulled up our reservation and showed her where it clearly said that kids under 12 stayed for free if using the existing beds, which we were.  She flatly said that wasn’t their policy and we had to pay so we told her to call her head office because we weren’t paying.

Grrrr.  During breakfast we discussed our Myanmar experience so far and agreed that this is the first country on this trip where they seem quite intent on shafting foreigners.  We have seen very little of this during our time in the other countries.  The regular people are very friendly, curious and welcoming, but it seems that anybody who has any regular contact with tourists is primarily trying to squeeze as much money out of them as possible.

The room ended up being very nice, with a giant king sized bed and a side sofa which Magnus laid claim to.  We had a round of showers and started feeling human again, so went out to explore the town, and on the way past the lobby were told that we didn’t have to pay for the kids, which was gratifying, but we were already in sort of a sour mood after our early morning confrontation.

The town is raw, dusty and walkable, surrounded by soaring hills on all horizons and has interesting sites around many corners.  There are clearly many more tourists here than we saw in Yangon, but still only a tiny percentage of the people you see in the streets.  I can imagine that within ten years, this town is going to look very, very different with the inevitable influx of tourists this region is bound to receive.

We wandered down to the riverfront and saw a large number of the long boats they use for getting to and around the lake.  The area was pretty gritty, with dirt streets, vendors and a bit of garbage laying around and it was clearly much more of a working jetty than a tourist one as there were people loading and unloading huge bags of what looked like tomatoes and limes out of the boats.

We continued exploring the town and in the doorstep of one building we saw a mother cat with two fresh little kittens.  When Stella spotted them she excitedly exclaimed, “Look, two kitties!  And they’re undamaged!”  She is clearly used to seeing the cats around Yangon, all of which were ragged and burdened with all sorts of unsightly afflictions.  A bit further down the road we came across an old school roller skating rink and saw some local 12 year old hot dogs rocking the pad with their slick moves to the sounds of the techno pumping from the giant speakers.  Sort of made me think back to when I was 12 and used to go to the Saints Roller Skating centre in Saskatoon in my very own home hood of Fairhaven.  I remember skating round and round, trying to look cool, as they played Men At Work’s “Who Can It Be Now?” and the Eurythmics “Sweet Dreams”.  Though I never did get too skilled with the old roller skates, my abilities certainly peaked around that age so I wasn’t planning on trying it out again thirty years later, especially since the largest skates they had were about six sizes too small for me anyway.

The rest of the day was pretty low key – the mother figure had a nice nap in the air conditioned room while the kids and I played successive rounds of cards.  In the evening we went for another walk, stopped at a restaurant for dinner and enjoyed the free entertainment of stray dogs mating passionately in the doorway.  I think the kids are starting to catch onto our standard, “Oh look at those animals doing battle” line.
Posted by Kristofor Olson at 9:40 AM