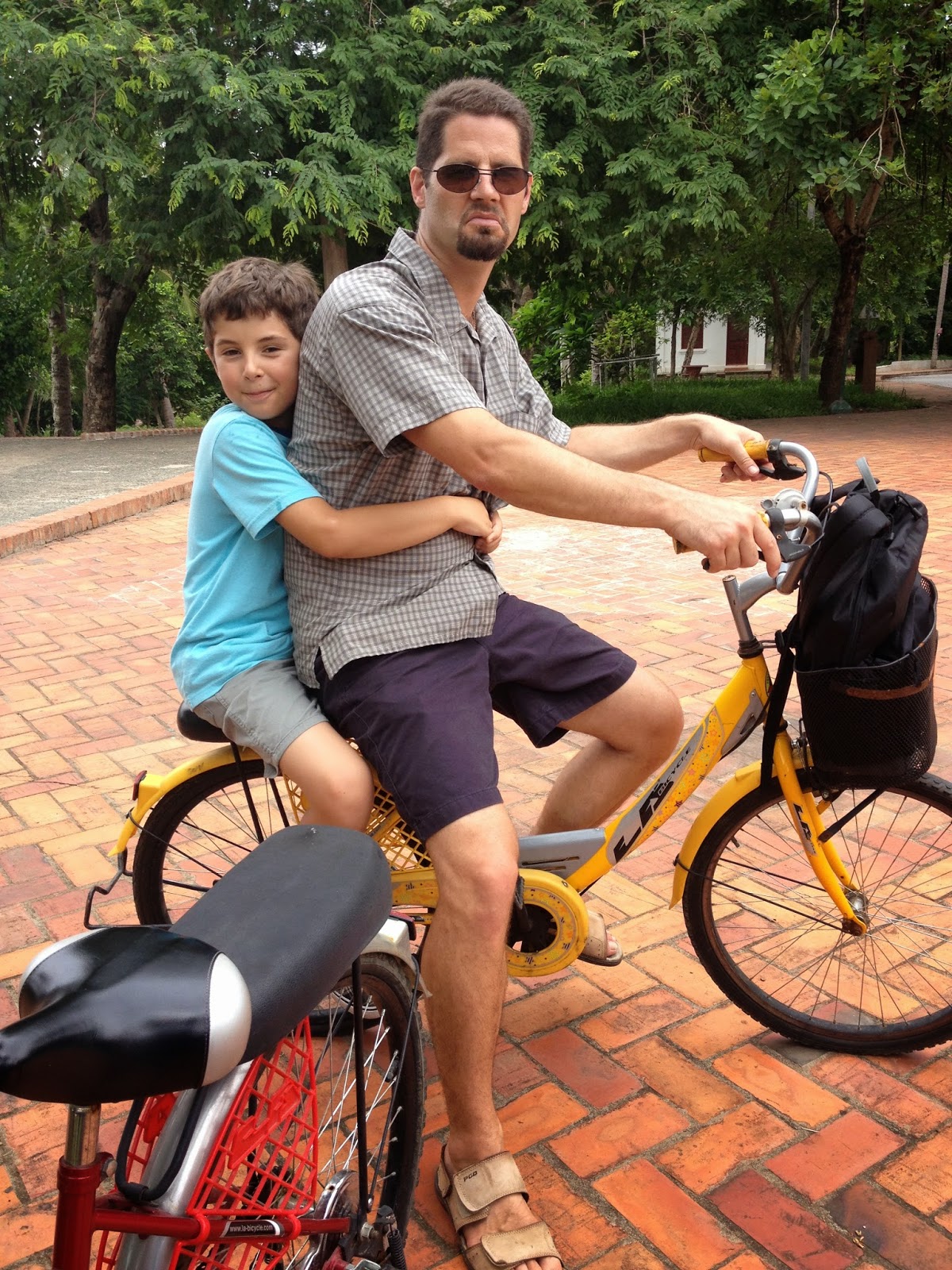 These past two days were glorious and nearly indistinguishable as we spent them simply cruising around the lovely town of Luang Prabang on bicycles, with Ana and I on pedal duty and the kiddies riding on the built-in seat on top of the rear fender.  Ana and I do not even own bicycles at home, and I haven’t actually ridden a bike in years, but after having so much fun these past two days we will be buying bikes when we get home.
Of course, the biking is a bit different here as we didn’t have any helmets and the busy roads are basically a giant free-for-all for the cars, trucks, mini-busses, tuk-tuks, cows, roosters, dogs, bicycles and people that are all using it as the same time.  But you know, it’s funny how the traffic just seems to move along, as everybody is just cautious enough to avoid a collision but not so overly cautious as to slow down the flow.  Again, seeing how the traffic works here makes me a little upset at Canada, where we love putting up traffic signals at every single street corner where there is even a remote chance of a potential accident, or to service the three pedestrians a day that need to walk across the road.  It just shows how bad we are at understanding risk and comparing options; for example, every new traffic signals causes millions of tonnes of CO2 to be released in the atmosphere over its lifetime because of all the idling vehicles sitting there, waiting for that little light to change to green, even though there is very little or no traffic.  This is a real cost to the world, but this is never factored into the decisions to put up a new traffic signal.  There have actually been experiments done in western countries where they have completely removed all the traffic signals and stop signs from entire cities to see how it affects traffic.  Guess what happens – less accidents and faster movement of traffic.  But it takes brave leaders to make such decisions, and these are in very short supply.

Yikes, what happened to my happy blog?  Hey, that’s the reason we travel – to see how things are done elsewhere and how we could improve things at home.

It seems that every corner you round in Luang Prabang brings another magnificent Buddhist temple into view, so you find yourself getting off the bike often, grabbing your camera and wandering around temples snapping photos.  There are monks which live at every temple and take care of it, pray and basically hang around.  We’ve heard that they normally go out and beg for meals, but it seems here that people drop food off at the temples for them.  As you wander around the temples, the monks really pay no attention to you whatsoever and let you roam around at will, which is really the same treatment you get from the locals – they rarely harass you to buy stuff and are very passive and friendly.

We would bike around for a while, and when we got hungry or thirsty, stop at any of the dozens or maybe hundreds of restaurants in town for a banana, papaya or mango shake, or a cold Beerlao, or a snack.  One afternoon we stopped at a massage place and each got a foot scrub and Ana got a facial treatment and the total bill was about fifteen bucks, which included a big tip.  We went through the national museum which is the palace where the king used to live and saw all his gold covered thrones, rooms and knick-knacks.  We stopped at bookstores and swapped our used books for different used books.  We explored dozens of streets and paths.  We talked to people.  We ate lots of ice cream.  Luang Prabang is the kind of city you can really immerse yourself in and a day could easily turn into a week.  This is the best city we have been to so far on this trip.

The ample leisure time in this lovely city provided the opportunity for me to engage in many juvenile antics, even more than usual.  I spent a lot of time with the kids studying chee-chucks (the little green geckos that are all over the walls and ceilings).  About a month before our trip, we were at a McDonalds and I asked Magnus if he knew what a spitball was.  Well, I was shocked and ashamed at my poor mentoring when I discovered he had never heard of them.  So, as a responsible father, I pulled the straw out of his root beer, bit off a sizeable chunk of my napkin, and demonstrated the proper spitball technique by splattering a juicy wad on the face of the Ronald McDonald mannequin.

Well, turns out we found an excellent situation to practice our spitballing skills.  As we sat in a restaurant one evening, I spotted a chee-chuck on a pillar near our table.  I asked Stella to “hold my beer and watch this” and grabbed a straw, chewed up a napkin, and launched a spitball across the restaurant, hoping to strike the creature and knock it off the wall.  I missed by a couple inches, but was delighted to see the chee-chuck first back away from the splatter, then slowly approach it, then quickly attack the wad and eat it!  The kids loved it and I could barely contain my joy at this exciting discovery.  Magnus and I launched a full volley of spitballs at the hungry lizard and only stopped when Ana threatened to leave the restaurant.
Posted by Kristofor Olson at 9:23 PM