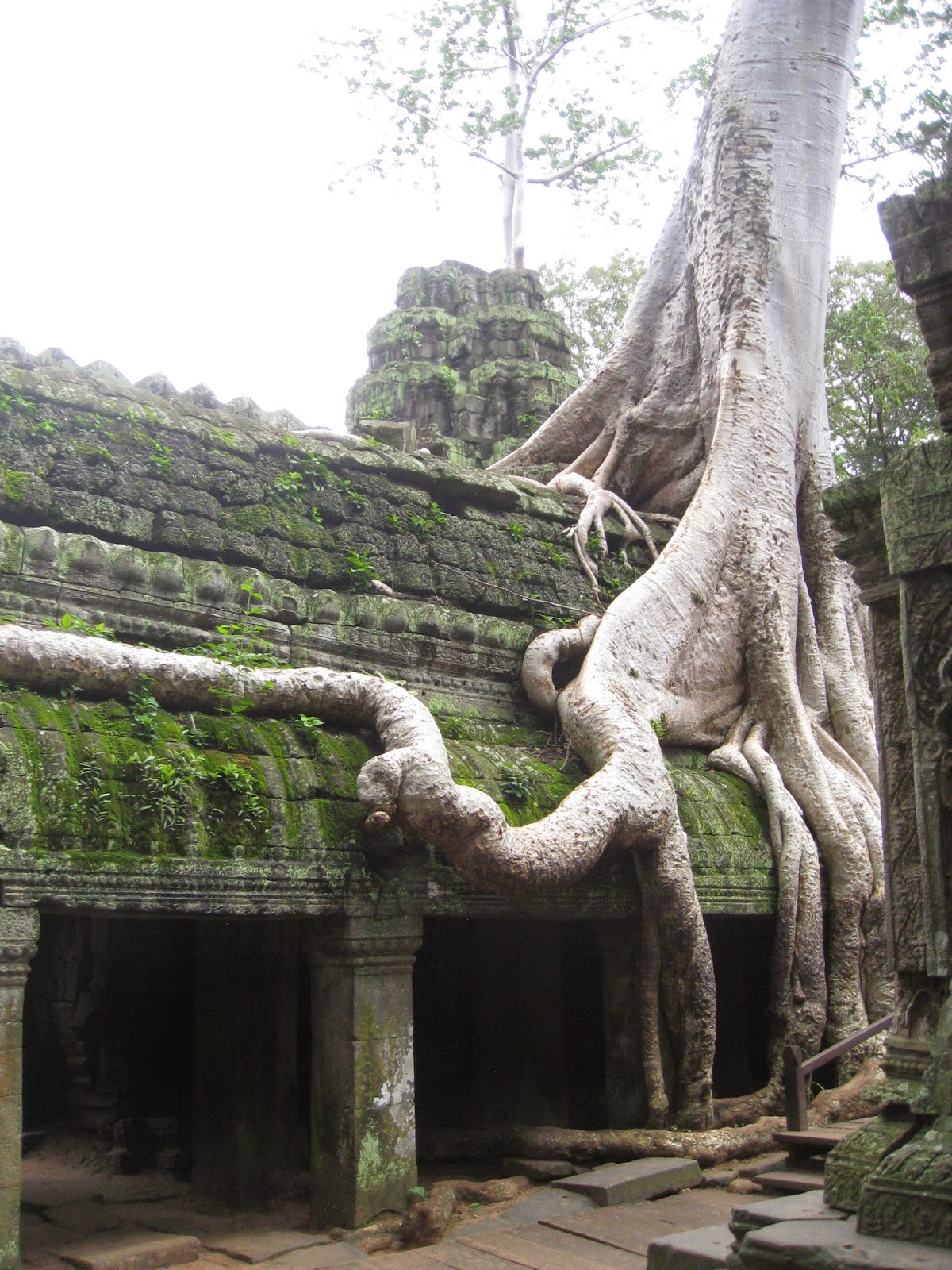 We woke up to an overcast day in Siem Reap, which was a blessing as we planned to spend the day exploring the temples of Angkor Wat.  We had a delicious buffet breakfast then I went outside and easily hired a tuk-tuk driver to drive us around for the day, at a cost of fifteen dollars.  We piled in the tuk-tuk and were soon put-put-putting down the road, along the way stopping for gas which was delivered from an old Coke bottle from a roadside vendor.  The entrance to the park is only a few kilometers outside of town so after a short ride we were at the gate and bought our three day tickets for $40 (kids under 12 get in for free) and continued along to the main road, which was full of fellow tuk-tukkers, people on bicycles, people walking, large and small tour busses, lots of motorcycles and even a troupe of monkeys wandering around the side of the road looking for handouts.

When we were back in Canada trying to decide where to go on our big trip, our initial plan was not Southeast Asia.  I picked up a travel book from the library and after Ana and I saw pictures of Angkor Wat, and all the other amazing sites in the region, our decision was made.  So we were both very excited to finally be here and on the verge of experiencing this exceptional site.

As this area was the home of over a million people which endured for several centuries, the geographical area is massive.  Fortunately most of the restored and most magnificent temples are within a comparably small area, in fact it is quite possible to explore by bicycle if you are willing to put in long days and are able to take the heat.

I think it is fair to say that it’s simply impossible to do justice to this incredible place with mere words and photos.  It is a place that has to be experienced in person and, for us, I think it was better that we did not do a lot of research beforehand and really did not have any expectations as this allowed us to be completely blown away.  For this first day we were able to explore about eight individual temples including the godly Angkor Wat which is huge, magnificent and otherworldly.  Of course, this is a very busy place so there was no moment when you could feel like Indiana Jones discovering a forgotten ruin for the first time, but if you timed your photos carefully you could get some stunning shots sans people!

Most of the guide books recommend starting your day with a dawn sunrise experience at one of the temples and continuing to dusk, but I seriously can’t imagine being able to put in that long of a day.  By 3pm we were all completely spent so we tuk-tukked back to an area called “Pub Street” in the central part of town and had a big lunch and some cold drinks.  We then wandered around the busy streets and found a place to rent bicycles – after our lovely biking experience in Luang Prabang this was our new preferred method of transport.  We found out immediately that there are only two rules for vehicular traffic in Cambodia:

1. Drive on the right (when it’s convenient)
2. Avoid death

The roads are chaotic and when you are on a bike with a kid balanced on the back, with no helmets and not knowing where you are going, you find yourself in an adrenaline fueled, eat or be eaten, heart pumping race for survival.  We did manage to get back to the hotel unscathed, but knew right away that bicycle transport here was not the way to go.

After a refreshing swim and a couple hours at the pool we returned to our room and had a backpacker supper (noodle soups, lunch leftovers, crackers) but supplemented with some freshly boiled corn I was able to buy from a street vendor at a big music festival that was happening just down from the hotel.  He was also selling fried crickets, but I had promised Magnus we were going to sample those together so I held off on bringing a bag of bugs back to the room.
Posted by Kristofor Olson at 11:41 AM