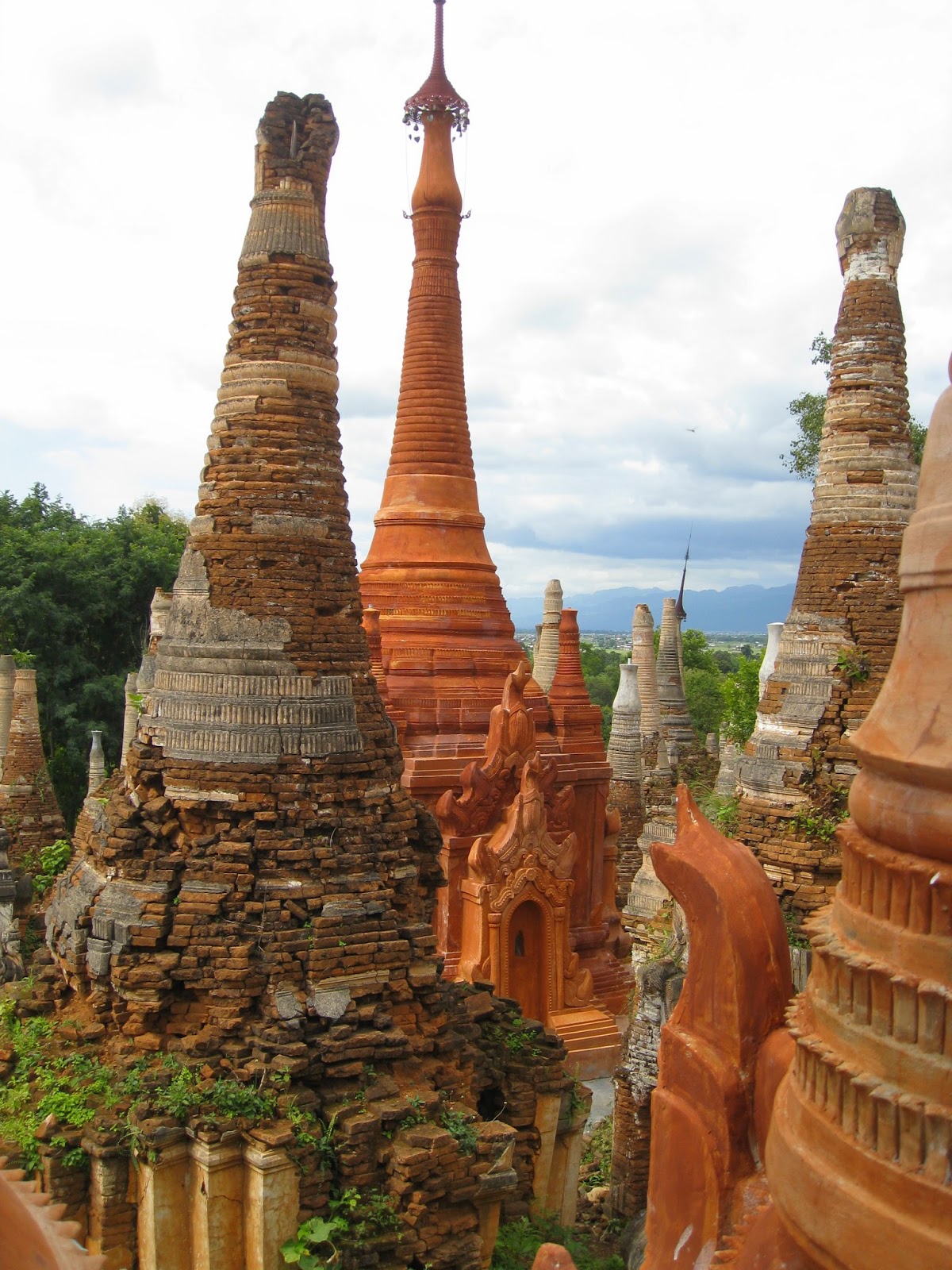 Yesterday we booked a lake tour for today so by 8am we were at the designated meeting point and were met by our 16 year old driver.  He led us down to the jetty and we boarded the long boat.  These boats are very particular to this lake and are approximately 30 feet long, just wide enough to fit in a row of wooden sitting chairs, and have a fully exposed gasoline engine at the back of the boat and a curious steering mechanism that allows the driver to raise and lower the prop and rudder as required.  Strangely, when the boat is underway the drivers’ preferred position of the prop seems to be slightly out of the water, producing a huge spray at the back of the boat.  I don’t know why this is, as I’d assume it would be more efficient with the prop fully in the water, but must have something to do with the angle of the adjustable prop.

We blasted off down the river and our driver expertly threaded the long, speeding boat through the wooden piles of the bridges above.  After a few miles we reached the open lake and were greeted by two traditional fishermen, or at least they used to be traditional fishermen until they learned that they make ten times as much money by posing on their nifty boats with their giant fishing cones and showing off their single leg rowing skills for the tourists that pass by, then asking for donations.  Later on in the lake we did see men actually fishing and they have this amazing ability to somehow hold the paddle with their leg and fan it in the water in sort of a figure eight pattern, which allows them to maneuver the boat while keeping both hands available for setting the fishing net.  We also saw them violently smashing their paddles against the top of the water, which we learned was done to scare the fish towards the underwater nets.

Our first stop was at the floating garden – an expansive area where they have somehow built thousands of rows of floating tomato plants.  This explained the dozens of boats we saw crossing the lake which were loaded well above the gunwales with giant bags of tomatoes.  After this we continued down the lake and came to a town of hundreds of buildings built on stilts and we zipped through the narrow channels at full speed and soon came to a huge pagoda which was the site for a big weekly market.  Our driver let us off the boat and pointed us to walk across a rickety, wooden bridge that crossed one of the channels and let to the market.  The vendors there were very aggressive, and almost without exception looked desperate to sell something.  We negotiated on a nifty horse puppet for Stella and Ana picked up a stunning laquerware serving tray for a friend.  Magnus found at least six different knives he wanted to by – from a full sized machete to a concealed double dagger – but we decided he’s not quite ready for that yet.

After the market, our driver wound the boat through the town and made several stops, including a small factory where they manufacture fabric from the threads of the lotus plant, an operation where they hand roll cigars made from tobacco and an interesting mixture of banana leaves, honey and spices, then to top it all off we arrived at a building that sold all sorts of handicrafts but, most importantly, had two women from the small region in Myanmar where they use brass rings to elongate their necks.  I remember being in the basement of my cousin Jason’s house back when I was a little kid and looking in wonder through some of his dad’s National Geographic magazines (we never could find the Penthouse stash and God knows we tried) and the one issue I was always fixated on was the one with the Burmese woman with the neck rings and long neck.  And decades later here I was, sitting on a bench beside one of these beautiful women, in her country, having a conversation with her and exchanging smiles.  It was a very special moment for me as I never in my wildest dreams imagined I would ever get to actually meet one of these women and see them in real life.  But here I was!

After that mind blowing experience we headed for the driver’s favourite lunch place (thankfully speeding right by another eatery along the way called “Restaurant Mr. Toe”) and had a cold beer and mediocre lunch along with a bunch of other tourists.  We made it a quick stop and were soon back on the water and our intrepid driver maneuvered us into a smaller channel which went for miles and miles, along the way shooting up through several steep rapids caused by wooden dams that had been build for some purpose we never did figure out.  After a lovely cruise he finally docked the boat on the band and pointed us a direction in which to walk and said “Pagodas, come back in an hour” so headed off walking and soon found ourselves in the middle of a busy village that had a school, many homes, shops and several roads.  It wasn’t clear which way we were supposed to go, but anytime we looked confused one of the locals would simply point in the direction we should be going.  We soon arrived at a gate and after paying a small camera fee of fifty cents, began what turned into a very long walk up a gradual incline with ancient pillars on either side and hundreds of vendors selling all sorts of stuff from menacing war helmets to Buddha statues to swords to fabrics to tapestries to you name it.  But when we finally reached the top…we were well rewarded.

We entered the hilltop temple, walked up to the giant Buddha image and all four of us sat down, cross legged, and sat in silence.  It must have been some sort of Buddhist miracle, but the children actually stopped talking for at least five minutes which, as far as I remember, has not yet happened on this trip.  Without anyone saying anything, or deciding anything, we just sat there and listened to the sound of bells chiming in the wind, distant voices, fans whirring, and the sound of ourselves breathing.  Though it was brief, it was powerful and set the stage for what was to come.  We walked outside the temple and were confronted with hundreds of individual stupas, which are brick or concrete towers that contain an image of the Buddha.  Some were coloured gold, some were grey, some were blue and others still were ancient and coloured by moss and disintegrating brick.  Most of the stupas had a gold tower on top which was hung with bells or chimes that jingled and sang in the slight breeze.  We walked around the pagoda and found there to be not hundreds of stupas, but over one thousand of them, spreading out far from the main temple.  There was nobody else there besides us and a couple of locals who were at work restoring some of the old stupas.  We wandered around, taking photos, allowing ourselves to be dazzled by this incredible site.

When a few more tourists arrived we started making our way back down, and before long were back at the boat.  Our young driver had been sleeping and his hair was sticking straight up in the air, but we were glad he had his afternoon nap while we were away so he was fresh for the ride back home.

We had one more stop on the way back up the lake and this was at the Jumping Cat Monastery.  Until recently, the monks who lived there trained the local feral cats to be performers and they would do all sorts of jumping tricks to the delight of the tourists who stopped by.  We were told that these monks who did this recently left this monastery and there either wasn’t anybody else who knew how to train the cats, or perhaps they just weren’t interested.  In any case, we had a nice walk around the impressive building, and found a long series of wall paintings that told the story of the Buddha.  After exploring a bit we returned to the boat and were soon blasting off back up the lake and about an hour later we were back at home base.

As that didn’t seem to be enough for the day, we stopped at the roller skating rink and the kids rented skates and gave it a go!  There was another family there – from France – who had three children and we struck up a conversation with them and ended up going for drinks and dinner together.  They were such a lovely family and Magnus and Stella did so well speaking French all night.  They are also heading towards Thailand so we are hoping that we may meet up with them again somewhere along the way.
Posted by Kristofor Olson at 10:02 AM