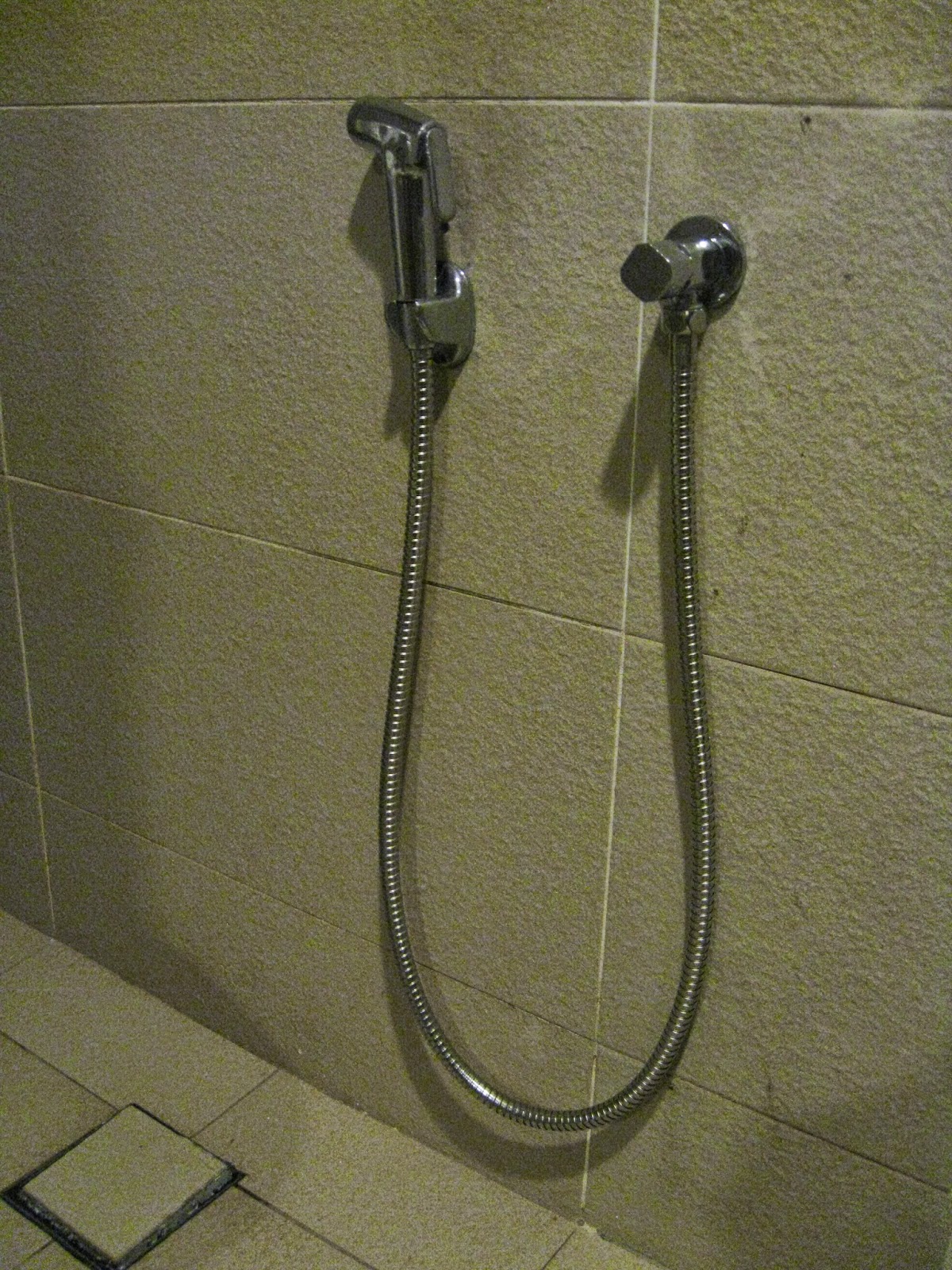 If you have ever traveled to a Muslim country, you will have noticed that the bathrooms are not set up the same as what you (assuming you are a Westerner) are used to.  Each country seems to have their own particular style, but in general, the following holds true:

1. There is no toilet paper
2. There is some sort of water supply near the toilet (or “squatter style” hole in the floor)

As we are currently backpacking through Malaysia I’ve been paying attention to their toilet systems here.  The toilet water supply in Malaysia is generally a hose with a valve to turn it on or off and adjust the pressure.  In Pakistan each stall had some sort of container, usually a plastic teapot, which was filled with water filled from the bathroom sink.  In Turkey some toilets have a sprayer built right into the bowl.  The other Muslim countries I have travelled to usually had one of the above, or sometimes a creative combination of them.

Because there is never a set of instructions on the wall of the stall, or a toilet manual, it sort of leaves the Western tourist in a situation where you have to improvise and use deductive reasoning to figure out exactly how the toilet ritual is supposed to work.  Even the mighty Google doesn’t turn up much on the Muslim toilet mystery.

Let’s talk a bit about western world toilet culture.  First of all, there is always toilet paper in toilet stalls.  Sometimes the paper is so thin that it seems more like a haze you are looking through, and you need about 18 sheets for a single swipe.  Sometime the paper is so rough that you could use it to sand drywall.  But there is usually some sort of paper product there, and if there is not, then you find another stall.  You never want to get into the situation where you have done the business, find no paper, then have to start some uncomfortable under-wall bartering with the dude in the stall next to you.  I can assure you, this puts you in a very weak bargaining position.  In the old days, if you were desperate and had your wallet with you, then you could sacrifice a couple dollar bills and at least get a cursory wipe.  But since Canada replaced its one and two dollar notes with coins, the next bill up is a fiver and most people would probably rather sacrifice a set of underwear than flush five bucks down the drain.  And if you’ve ever tried to wipe your ass with a coin you probably wound up with a dirty butt, dirty fingernails and possibly a cracked porcelain bowl.  There actually is one other option.  When I was a young lad in elementary school I remember one day finding myself in a stall with no paper, so I just used one of my wooly socks.  God knows how the janitor fished that out of the school plumbing.

So Westerners basically wipe their bums with paper then toss the paper in the toilet and send it swirling away.  Unless you are in the Caribbean or Latin America, in which case you dispose of the dirty paper in the insanely small wastebaskets provided because the plumbing in those countries supposedly can’t handle paper.  The general Western process is to remove a reasonable length of paper from the holder, fold it or bunch it, depending on your preference, then wipe.  Repeat this process with successive rounds of wiping until the wipe comes out generally clean, let’s say if the paper is less than 3% soiled then you are probably good to go.  Maybe one final safety wipe, but that’s about it.  Regardless of how well you wipe through, you never come out of the crapper feeling completely fresh, if you know what I mean.  In fact sometimes after multiple visits to the john, for example after a heavy night of drinking, or a giant Indian buffet the evening before, or on back-to-work Mondays (for me anyway), by mid day you are really feeling like you could use a shower.  And this is where the Muslim toilet solution makes so much sense.

To put it plainly, Muslims use water and their hand to clean their butts.  Before you blurt out, “Gross!” just think about it a bit.  How do you clean your bum in the shower?  Yes, you use your hand, probably with a bit of soap lather on it, but your hand nonetheless.  Unless you’re one of those people who uses a facecloth in the shower, then you might be able to get away with no physical contact.  Or I suppose you could use one of those loofah sponges, though I think that may chafe a little.  So let’s say that generally you use your hand.  So why do Westerners feel so repulsed with the idea of using your hand immediately at the source of the contamination?  I just don’t know.

Back to the Muslim toilet hoses.  It seems to me that what you are supposed to do is hold the hose with your right hand, direct it behind and beneath you, then turn the valve on with your left hand.  You then use the water itself, or possibly the water in combination with your left hand, depending on the presumed condition of the befouled area.  Same sort of idea with the containers, except with that system you have no pressure so would need to pour the water down your backside and use your hand to mop things up.

Thus far on our journey across Malaysia I’ve logged (no pun intended) three different types of toilet hose sprayer attachments.  The first is what I call the “vegetable sprayer” and is the premium variety.  This sprayer is just like the one your grandma used to have on her sink and was used for spraying the dirt off the beets and potatoes.  It was also good for shooting your brother in the face and starting a kitchen, or sometimes whole-house water fight.  The head has a trigger which allows you to increase the pressure of the water the harder you squeeze.  The trick here is to apply enough pressure to gently remove the fecal matter, but not to squeeze so hard that it blows your nuts clean off.

The second type is the “constrictor”, which is a shiny, stainless steel fitting that constricts the water supply to a small hole, producing high pressure from a relatively low pressure water source.  Works great unless you get a surge in water pressure, in which case you might get a surprise instant enema, and possible colon damage.

The third type is just a simple hose with no fitting at all where the pressure is controlled by adjusting the main wall valve, or maybe by putting your thumb over the end to produce a fine, high pressure stream.  Or maybe the hose only version is the result of somebody stealing the fitting and taking it home to replace their cheaper one.  In any case, the three different types generally offer the same functionality.

The question is, should we implement this system in the Western world?  Let’s weigh the advantages and drawbacks.

First of all, we could save a ton of trees (and money) by not using toilet paper.  This should get the environmentalists and cheap people on board.

Second, we could all be so much cleaner and truly feel refreshed after leaving the can.  This may reduce the need for daily showers, thereby getting the clean freaks and people who hate wasting sleeping time on morning showers on board.

Lastly, this may truly bring the Muslim and non-Muslim worlds together in a show of toilet unity.  Let’s remove an unnecessary difference between us.

Now, some of the disadvantages.  The primary problem with this system is what to do with the resulting water on your backside.  Because most Muslim countries are so damn hot, you’ve got the ass sweats practically all the time, so a bit of extra water from the toilet hardly makes a difference.  Not so in the cold, Western world where we like to keep our butts dry.

Second, in the Western world there are only cold water lines run to toilets.  And cold water lines in the Western world generally carry very, very cold water.  In the Muslim world, all water is lukewarm, regardless of what the tap says, so the water spraying onto your butt is probably quite close to body temperature.  Blasting your ringpiece with sub-zero water could result in a stroke, or instant rigor mortis and could be a major public safety issue.

Lastly, people just don’t like change.  If you have to struggle through the day with a partially compromised backside, so be it.  And if you are at home, and feeling a little sullied mid-day, you always have the option of hanging your rear over the bathtub and putting that loofah sponge to work.
Posted by Kristofor Olson at 7:42 PM