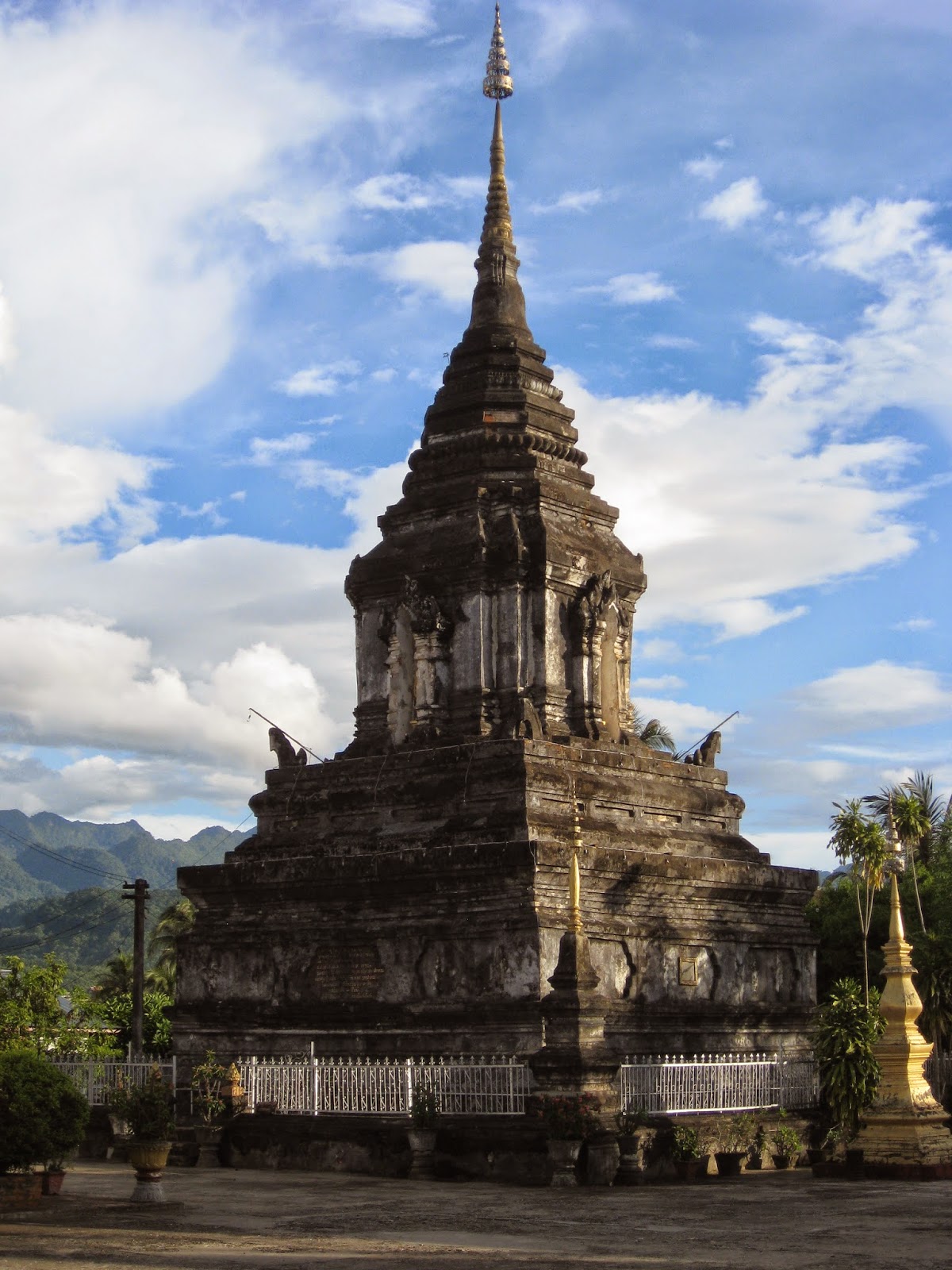 I awoke to a continuation of the downpour which began the previous afternoon.  The monsoon season was clearly in full force here in Laos.  Our mini-van was scheduled to pick us up at 9 so by 8 we were in the breakfast area, which was on the second level of a riverside structure housing the restaurant kitchen and bar on the main level.  The breakfast was delicious and the scenery amazing so we enjoyed our food and what little time remained of our stay in Vang Vieng.  We considered spending another day here, but had heard that Luang Prabang was even nicer so had just booked the one night, and since it was raining anyway it wasn’t too disappointing leaving.

The mini-van driver actually showed up early, so we quickly packed up our stuff and got choice seats as we were the first stop.  This looked like a big improvement on yesterday’s transport as the vehicle was quite new, the ac worked well and the driver looked like he was on a mission.  After picking up several more people, including a very nice French family, we were on our way.  If I had done some research on this particular stretch of road, I would have given the kids a round of Gravol, as the ride went right through the mountains, up and down hundreds of switchbacks, snaking its way through the beautiful, forbidden landscape, providing a dizzying ride.  Magnus found a plastic bag and fashioned it into a highly functional vomit catcher by wrapping the two handles around his ears placing it firmly around his mouth, which provided a good laugh once we noticed what he had done.  Ten minutes before our lunch stop, Magnus cried out, “Stella’s puking!” and we looked over to see her with a handful, faceful, and lapful of warm spew.  Magnus then fell to the chain reaction effect and had his own puke, but his invention worked perfectly and caught everything.

We arrived at our lunch stop, got Stella cleaned up and changed, then had a quick lunch and were soon back on the bus.  Exactly six hours later from the start of the journey, we arrived in Luang Prabang main bus station on the outskirts of town.  The tuk-tuk driver wanted 100,000 kip for the ride into town (the conversion rate is just shy of 8,000 to 1 CDN dollar) but I managed to negotiate him down to 50,000 which I was quite proud of.  As we were all loaded up in the tuk-tuk, the driver jammed the French family in with us, thereby getting his original 100,000.  He drove into the centre of town, dropped us off in front of a narrow street and told us our hotel was down there, so we paid him, started walking and discovered that our hotel was nowhere to be found, so with the help of a kindly chap from Montreal who was quietly nursing one large Beerlau bottle after the other, we figured out where we supposed to go and hired another tuk-tuk for 25,000 who took us there.  Stella was feeling very bad that we had been ripped off, but we told her it’s no big deal as you will always have to deal with people in life who try to rip you off, and many will be successful, especially when you are traveling and in unfamiliar situations.  We told it’s best to not get too worried about it, and the end effect is usually only a few bucks, and it’s all part of the experience.

Our hotel, called the Chitchareune Mouang Luang, is fantastic and has a large, cool swimming pool, which we immediately plunged into and rinsed off the bus sweats.  After this we relaxed in the room for a while, then once it had cooled down outside, went for a walk into town.  One of the first sights we found was a Buddhist temple, and as we approached we heard this beautiful, clear, spine-tingling chanting coming from within.  We peeked in to see a dozen or so monks along with quite a few westerners participating in some sort of ceremony, or perhaps it was just meditation.  Their voices sang in unison and we stopped for a while to listen and be amazed, haunted, uplifted by their heavenly voices.

We continued walking along until we reached the central area, which borders on the banks of the mighty Mekong river, then explored poked around at a few shops and went into a trip booking shop and, before we knew it, had a booked a day trip for the following day which involved caves, boats, elephants and waterfalls.
As our hunger was getting the best of us, we finally decided on a restaurant and sat down to enjoy a delicious meal, and made friends with a lovely Swiss couple who were sitting next to us.  We then wandered through the night market and found it to be completely different than all the other markets we’ve seen – instead of thousands of knock-off items this market instead sold all types of Laos handicrafts, from snake whiskey to bracelets to silver jewelry to the ubiquitous MC Hammer pants.  Magnus bought an iPhone speaker which was actually a piece of bamboo you set your device in and it magically amplifies the volume.

By this time little Stella was wearing out fast so she jumped on my back and we walked back to the hotel.  The kids crashed, Ana did her nails, and I sat on our balcony and enjoyed a Cuban cigar I had tucked away in the depths of my backpack and a cold Beerlau, while listening to the night sounds of the city.
Posted by Kristofor Olson at 8:55 PM