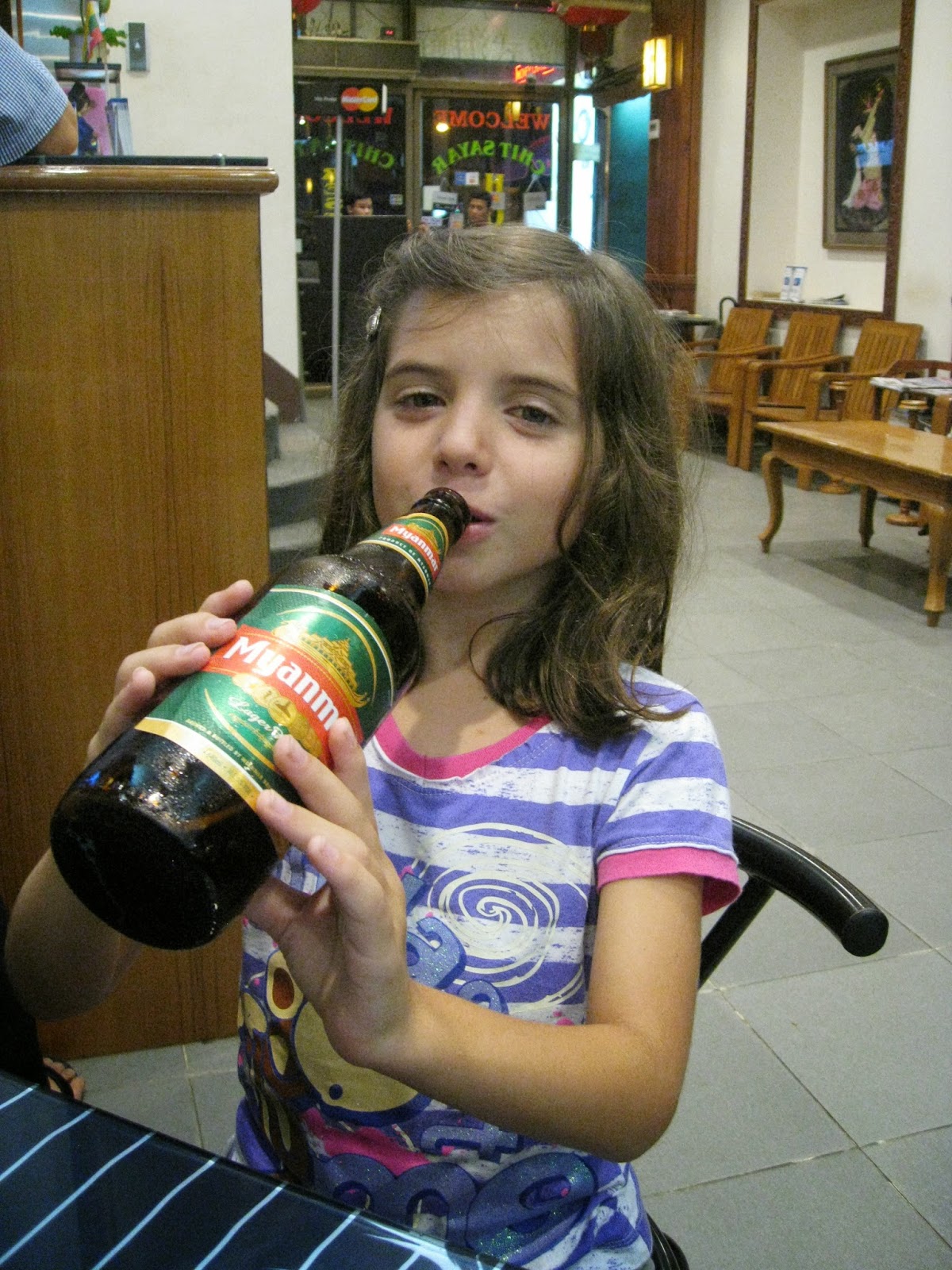 We spent the previous night at a Bangkok hotel not far from the airport.  As we didn’t have to leave the hotel until 1pm we had a leisurely morning hanging around the room, going for a workout and swim, and furiously catching up on the daily journal writing.  We took a taxi to the airport, got checked in and as we were going through security they flagged two of our carry-on bags.  As we’ve been travelling by bus most of the time we didn’t have to think much about liquids in our carry-on bags so were obviously sloppy when readying the bags for the flight.  From my bag, she plucked out the last of our mosquito spray and sunscreen.  But Magnus’ bag held the real treasures – she lifted out his beautiful buffalo bone carved knife and sheath and his quintuple action, elastic shooting wooden gun.  The only banned item that Magnus didn’t have in his bag was a durian fruit!

The security double checked with her boss but they simply would not let them pass so we watched in despair as she dropped the knife and gun into the discard box, then walked sadly to our gate.  It’s funny – no matter how many times you do something, and no matter how well you know the rules, sometimes you just screw up.  To cheer him up we told Magnus that we would pay to replace these items as we were sure we’d be able to find something similar along the way somewhere.

After a short flight we dropped into Yangon or, as it used to be called, Rangoon.  Myanmar, or as it used to be called, Burma (I promise I will stop doing this) has a rich, turbulent, shocking history and is one of those places that people just generally don’t know much about.  For the past several decades the country has been led by a socialist military government that has resulted in economic stagnation and misery for most of the population.  When you are a military junta running a country, you can do some pretty neat things, such as change the names of a bunch of the cities and even the country, change the location of your capital city on a whim, get yourself a new flag, and gun down student protestors.

Since 2011, the government has started upon the path of reform and the pace has become blisteringly fast and the country is heading towards some form of real democracy, resulting in many of economic sanctions imposed by other counties being lifted.  One of these reforms is allowing much more access to tourists, and this is one of the reasons we decided to come here as we expected to find a country that is like what the surrounding countries were like twenty or thirty years ago.

The immigration process was easy and straightforward (especially since this is the first country on this trip where the immigration people speak English) and the airport was clean, new and well organized.  Despite all our research pointing to the contrary, there is indeed a “Visa on Arrival” process where you can get your visa when you land.  And it looked like the visa cost $30 instead of the $120 we paid getting our visas issued in Canada.  We were confused by the time showing on the clocks, but soon figured out that Myanmar must have stolen a page from the “Book of Newfie” and they were only half an hour back instead of the standard one hour as you travel west across time zones.

We exchanged our crisp, new US dollars at one of the many currency exchange desks for local currency at a rate of 970 to 1.  It is true that here they do not accept any US money this is old, wrinkled, folded, ripped or anything less than perfect.  We got a taxi for 8 dollars and headed into central Yangon through incredibly dense traffic.  Here, for some reason, they drive on the right hand side of the road but the vehicles have a British style wheel on the right.  There are also no motorcycles allowed in the city.

We arrived at our hotel – The Yangon Regency, and as we stepped into the blazing hot lobby we were hit with the aroma of a hundred sweaty men eating fishy food, drinking beer, smoking, and sweating profusely.  Seems the lobby is transformed into a restaurant several times per day.  I looked over to Stella and have never seen such a horrified expression on her face.  The man at the lobby was very nice and assigned us a room so we took the small elevator up to the sixth floor, opened the door to a windowless room and found two small, single beds, a terrible smell….and not much else.  I looked over to Stella to see the most horrified expression on her face (even worse than three minutes previously) and her eyes were saying to me, “You can’t be serious!”  I guess these kids have become accustomed to the royal residences that Ana has so far been able to procure for us so this current option was well below the minimal acceptable standard.  Stella said, “This is worse than the Fragrance Hotel!” which was the very first place we had in Singapore and quite basic.  After pulling back the sheets and finding little fleas hopping around, we went back down and got another room, which smelled better and had no evidence of bugs.  Sixty bucks doesn’t get you much in Yangon.

After a short adjustment period, we went for a walk to try and find somewhere to eat.  We were staying right in the middle of Chinatown and the streets were jam packed with vendors of all sorts so we snaked our way through the durians, raw meat laying on boards, fried crickets, bbq meat stands, and flower sellers until we found something that looked like a restaurant, but which actually turned out to be a hotel lobby with chairs and tables.  We ordered food, which was quite good, and I washed it down with a Myanmar beer which was decent.  After eating, we started making our way back to the hotel, and on the way back found a little bakery where we bought dessert for the kids.  We also encountered quite a sad sight, and Ana nearly burst into tears.  There was an older lady, blind, and very dirty, being led around by a small girl carrying a pot to collect donations.  The lady was singing a haunting, beautiful song with a strong able voice, standing amidst a hot mob of people and cars coming and going.  That is an image one won’t easily forget.

We returned to the hotel, crammed ourselves into the beds and settled in for our first night in Yangon.
Posted by Kristofor Olson at 9:12 AM