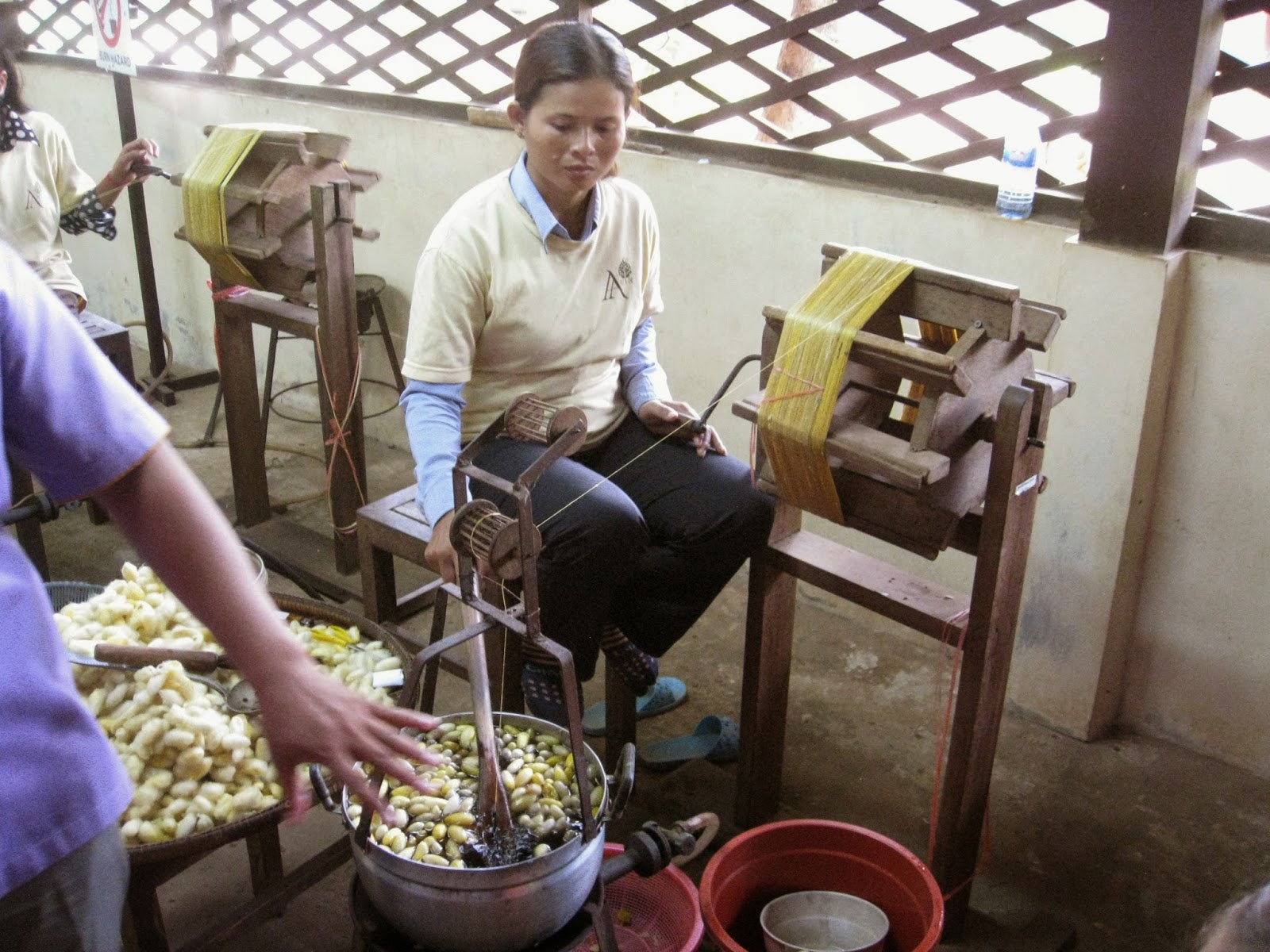 Though we purchased a three day pass for Angkor Wat we decided to spend our final day in Cambodia exploring the city and surrounding areas.  Yes, we could have easily spent another week exploring temples, but we felt we had seen enough already and wanted to see what else we could find in and around Siem Reap.

We took our last bicycle journey into town and went to the Angkor Artisan Centre where they had a free shuttle bus that takes tourists out to their silkworm farm, about 16 kilometres outside of the city.  As we waited for the next shuttle we had a look around the facility and found dozens of local craftsmen doing intricate carvings on sandstone and wood.  They seemed to be carving mainly Buddha heads and elephants and as the workshop was wide open you could get up close to see how they were doing it and what sorts of tools they were using.  We learned that this institution had been part of one of the temple restorations and had carved a large number of sandstone blocks to be used where the original ones were either too damaged or could not be found.

The silkworm farm was simply amazing.  We were taken on a guided tour where we saw the process of silkmaking right from start to finish.  We saw the mulberry tree nursery which feeds the worms, then the worm eggs which were hatching, then the baby worms, then the mature worms, then the cocoons and the entire extraction, spinning and weaving process, which is all done the same way as it has been for centuries.  The final products were all on display and for sale at a gift shop at the end of the tour.  I was tempted by a dashing grey, shimmering silk suit, but since I’m not David Bowie or my brother Curtis, I decided not to purchase it and left in the same cruddy shorts and sweaty t-shirt.

In the afternoon we returned the bikes then explored some bookstores, more markets, had a snack and some drinks, then returned to the hotel for an afternoon swim.  As we had a super fast internet connection we made some Skype calls to the family back home.  After it had cooled down a bit, we tuk-tuk’d back into town for a final night in Siem Reap and on the way had a wonderful experience which really says it all about the Cambodian people.  It had started to rain heavily, but as the tuk-tuks are covered we were able to keep dry.  As we motored down the busy street, a motorcycle pulled up beside us, and on the motorcycle was a family of four, all drenched to the core, and all giving us these huge, joyful smiles.  This simple, genuine moment was so touching, as here were two happy families, from two different worlds, sharing a brief moment during a downpour.

In the past we’ve found that when you have a major tourist draw like Angkor Wat, the nearby city is more often than not an appalling place, existing primarily to rip off tourists.  But Siem Reap is truly the exception as it is a vibrant, authentic and exciting city and worth visiting in its own right.  I must admit, at first I wasn’t sure, but after spending a couple days here it has really grown on me.  I also learned that Cambodia is known as a real party place as they allow the bars to stay open as long as they want, while in some of the surrounding countries such as Laos and Thailand, the bars must close after a certain hour.  One of the other things I like about Seam Reap is there is nowhere near the level of “seediness” that we found in Chiang Mai.  This is one thing we are actually a little anxious about for our visit to southern Thailand as we’re expecting to find a whole lot of this and don’t want to traumatize the kids too much (though if they are not traumatized by now I think they should be okay!).

Saying all that, as you walk around Siem Reap you do notice a number of older, white gentlemen with young Cambodian friends.  During dinner we looked over to a nearby table to see a classic scene.  A sixty year old English man was sitting at a table with what looked like a nineteen year old Cambodian girl.  He was trying to look natural, making small talk to her as she ignored him completely and occupied herself by playing Candy Crush on her tablet.  It is quite a pathetic display and I’m sure those old perverts feel pretty ashamed, though obviously can’t help themselves.  I’m sure when their trip is over and they are broke and no longer a globetrotting super-stud they return to a depressing little bedroom in their mom’s house and spend most of their time alone.

After a terrific meal, where we had a lovely chat with a Malaysian family sitting beside us, we wandered around the buzzing streets and Magnus decided he just had to have another fish spa.  I convinced Stella to give it a try too but the whole thing was just too creepy for her, so she just sat beside her brother on the aquarium bench, and Ana and I looked on, enjoying a drink and soaking up the surroundings on our final night in Siem Reap.
Posted by Kristofor Olson at 11:02 PM