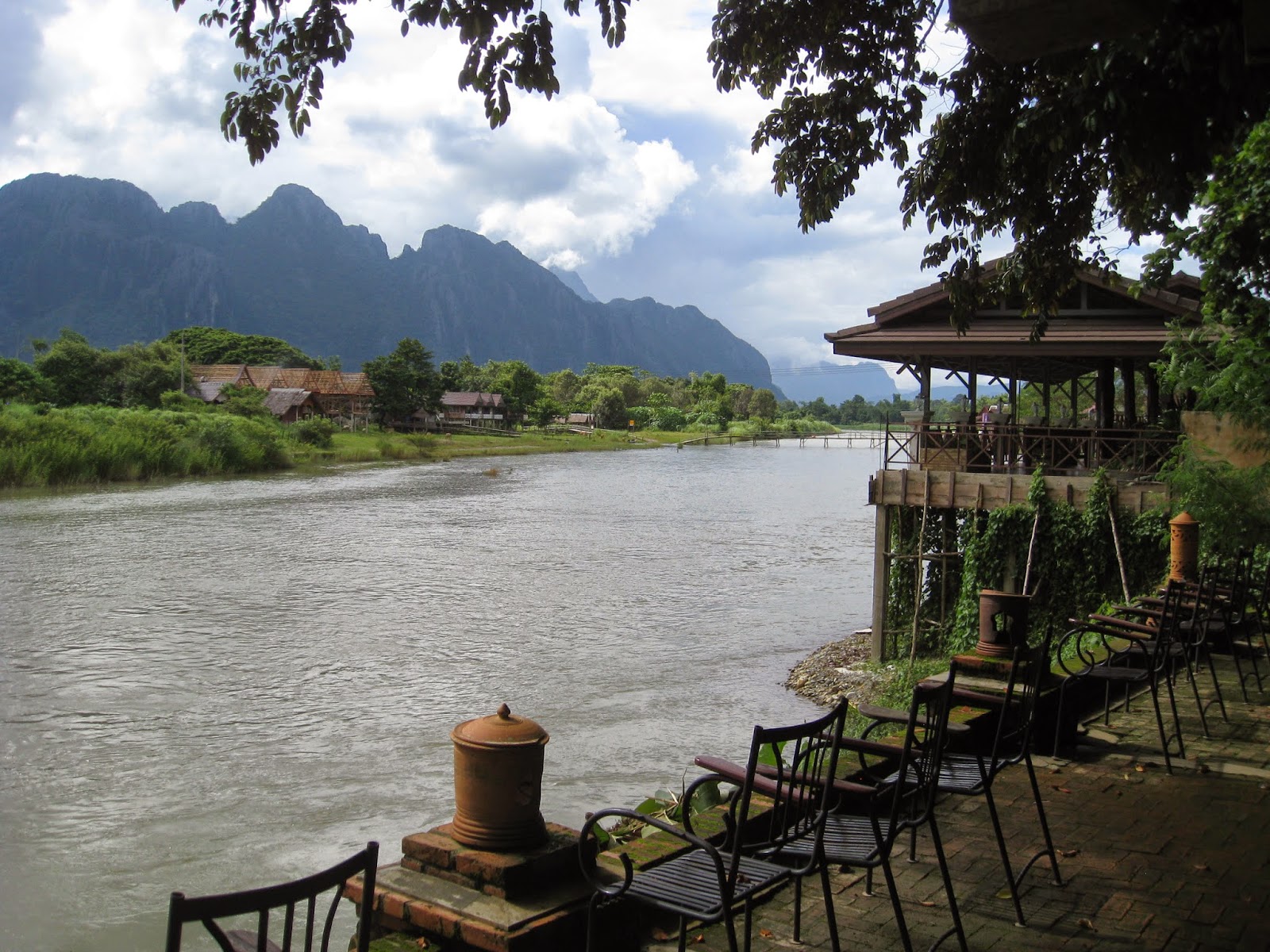 When the bus arrived to pick us up at the hotel for the four hour trip to Vang Vieng, we were surprised to find that it was not a bus; what arrived was an oversized tuk-tuk that the driver managed to cram 14 people into.  Our fellow sardines were all backpackers, and each looked at their companions nervously wondering if this was to be our mode of transport up the inevitably dusty and bumpy northern road.  Fortunately, after a single stop where he crammed two more people into the impossibly full vehicle, we arrived at the central bus station and were scientifically unpacked from the tuk-tuk grande then led to a normal sized bus where we found four seats together and got settled in for the ride.

The first half of the ride was pretty gloomy – flat terrain, garbage littered on the roadside, famished looking goats and chickens picking around, dirty, depressed roadside shops selling dusty baguettes and papayas, and no onboard entertainment of any sort.  Actually, there was one sort of entertainment – a boy Aussie and a girl Aussie sat across from us and talked constantly the entire trip.  I mean, they didn’t even stop to breathe.  I think they may have been hot for each other because she would reply to everything he told her with a dreamy, “Wow….” even if he said something like, “I put on fresh pants today” which would have been a lie as he looked real grubby.  I also couldn’t help but get annoyed by certain parts of the Aussie accent, in particular, the way they say the words “no” and “so”.  They actually say “noy” and “soy” in an especially nasally way.  It goes like this:

“Soy, oy hadta whip off me trousahs en sit there in me jocks.”

It’s actually good to hear that good old Aussie accent again.  We are soon going to be meeting up with my Aussie buddy Todd, whose accent seems to get thicker the longer he’s away from Australia, so tuning up my ear will help in the translation process.

As we looked around the bus I could see we were definitely back in the heart of backpacker land.  It seems that traveling around the world gives people the license to be filthy.  As you know, Ana is a fashion backpacker, so she looks as good backpacking as she does at home, and it takes just as long for preparation in the morning (why do you think I have so much free time for writing journals?)  Most backpackers are pretty grimy.  And many of them are super skinny from all the weed they consume in lieu of food, and when they do eat it’s all that super socially conscious vegan slop, which doesn’t provide much in the way of calories.  There was one French couple, and I really felt like offering to buy them a bath and a burger as they were gaunt and pale, and I’m sure buddy’s waist length dreads which were all rolled up and bundled on his head were hosting their own ecosystem.

Ana also pointed out the new female backpacker costume, which I hadn’t really noticed.  Remember back in around 1986 when those MC Hammer clown pants were in style?  Actually, my grandma made me and my two brothers each a pair of them and they were so cool.  Then they became ridiculous.   But seems they are cool again because 90% of the girl backpackers are wearing flashy, multi-coloured MC hammer pants.  It sort of sucks that Ana pointed this out, because now I find myself saying “You can’t touch dis” about 30 times a day, once for every time I see a chick wearing them.  She also noticed that they all wear these thin, fabric bracelets, presumably one for each dude they have laid while backpacking, or at least that is Ana’s theory.  Speaking of that, I better pick up one for Ana, the mosquito netting around the two small twin beds in our small room provided the perfect visual shield from the sleeping children this morning.  Maybe I should get her some MC Hammer pants too.

The trip to Vang Vieng actually took six hours from start to finish, so by the time we arrive we were quite exhausted.  Our hotel, called the Ban Sabai, was a set of rustic, cool, small chalets, most of which looked overlooked the Nam Song river which flowed rapidly across the back of the hotel grounds.  Surrounding the town are a series of mountains, making the scenery quite stunning, and providing for a wide range of adrenaline junkie activities like rock climbing, trekking, kayaking and dune buggy racing.  We bought our tickets for the following day’s journey up to Luang Prabang, and then found a nice place for lunch, starting off with a delicious cold Beerlau.  As we sat, we noticed a couple dogs in the street, one whom we saw steal a sock from a little girl sitting at one of the vendor stalls, and the other which was spray painted.  We did see one other spray painted dog in Vientiane, but assumed it was a one off, so now it is looking more and more like people from Laos like to spray paint their dogs.

We wandered around town for a bit then went back to our cabin, and just as we arrived it started to pour.  And pour.  And pour so much that we decided the day was finished so we spent the final couple hours sitting in our room, reading, talking and relaxing, in preparation for yet another long bus ride tomorrow.
Posted by Kristofor Olson at 8:51 PM