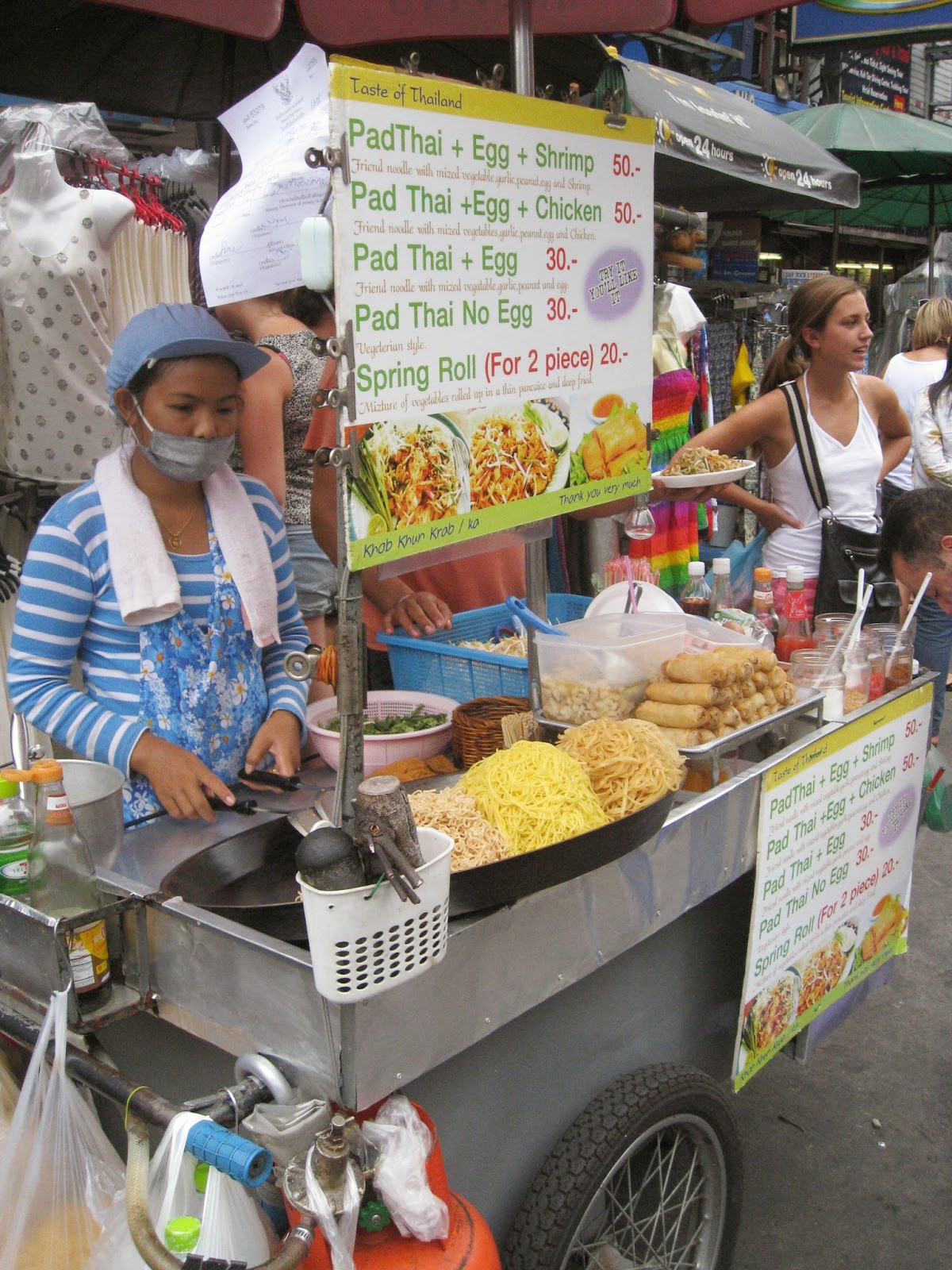 Bangkok is a big place with many things to do so your first challenge is figuring out where to begin.  As it was an overcast day we decided to go for a walk and see if we could make it to the river – I had read that there was a boat you could take all the way into the centre of the city.  Plus, we were really feeling like we could use the exercise after the five days spent on the boat, where you spend an awful lot of time sitting around.  We walked for about an hour, but were still nowhere near close and it was pretty grimy walking around beside the busy street, so we flagged down a tuk-tuk and he carried us right to the nearest boat terminal.  We picked up tickets for a little over a dollar each, boarded the boat and went on a nice little cruise up the Chao Phraya river.  There was a tour guide on board who talked about the sites of interest as we passed them.  He tried his best to make jokes, but between the terrible sound system and terrible English, they sort of flopped.  At least he tried.

We got off at the stop closest to the Royal Palace.  Of course, as soon as we stepped off the boat we were in the middle of a big market, so we navigated through there and fortunately popped out at the palace.  There were many tourists around, but we had a quick look inside the gates of the palace and promptly decided to save ourselves the hefty entrance fee and give it a miss.  At this point in the journey, it’s not too hard passing touristy things up, as it is seems next to impossible to top the amazing sights we’ve seen already.  An enviable position to be in, for sure.

Instead, we just went for a big walk.  Surprisingly, beside the Grand Palace is a gigantic, empty, grassy park.  On the information board mounted nearby it told the story of the park, and how it’s had many purposes over the years, such as a test site for rice planting, horseracing and open market, but now it simply sits empty and is used mainly for official events and special public occasions.

We walked for quite some time and then came upon Khao San road, so we stopped for a drink then wandered around the crazy street for a while.  Since Stella and I didn’t want to join Ana and Magnus shopping in the markets, we instead decided to go for a five dollar, 30 minute foot and leg massage so we took a seat on two of the big comfy chairs which were set up on the street, and within seconds two Thai masseurs were going to town on our feet.  It was a great chance for us to relax and do some serious people watching.  This is Bangkok’s backpacker haven and the only people there who were not tourists were people selling stuff to tourists, which meant we got to enjoy a rainbow of Journey pants, dreads, tattoos and fabric satchels.  I saw one dude who looked like a clone of at least six others backpackers I’ve seen on this trip in various countries.  He was well over six feet tall, pasty white, skinny, had massive dreads all piled up on top of his head, a wispy beard, fabric bracelets and a pair of sweet MC Hammer Clown pants (a.k.a. Journey Pants…I just love both these terms so much I can’t decide which one to use!) where the crotch was slung so low it nearly dragged on the ground.

I also noticed there were Italians all over the place, more than I’ve seen anywhere.  Ana told me Italy practically shuts down in August for holidays so I guess the kids with cash hit it for Thailand.  I’m sure there was quite a party on this road every evening, but we didn’t really want to stick around to catch it, so I sent the kids to find a tuk-tuk for us and they negotiated a great deal on a ride back to our hotel.  She was a beautiful tuk-tuk, even had flames painted on the side!

We choked and gagged through the diesel fogged air of central Bangkok, overpowered only occasionally by a whiff of durian from a nearby cart overloaded with the toxic fruit.  The tuk-tuk man dropped us off at the station then we went to the local market and picked up a good supply of backpacker lunch food – tuna, bread, fruit, jam, seaweed chips, soups, crackers, Oreo cookies, Pringle-like chips, beer, milk, Menthos and so on.  We were fully stocked for an awesome backpacker dinner in the hotel, which we enjoyed as we enjoyed a hacked, hand-cam movie DVD we picked up in the market.  The quality left something to be desired, but was watchable….just.
Posted by Kristofor Olson at 10:41 AM