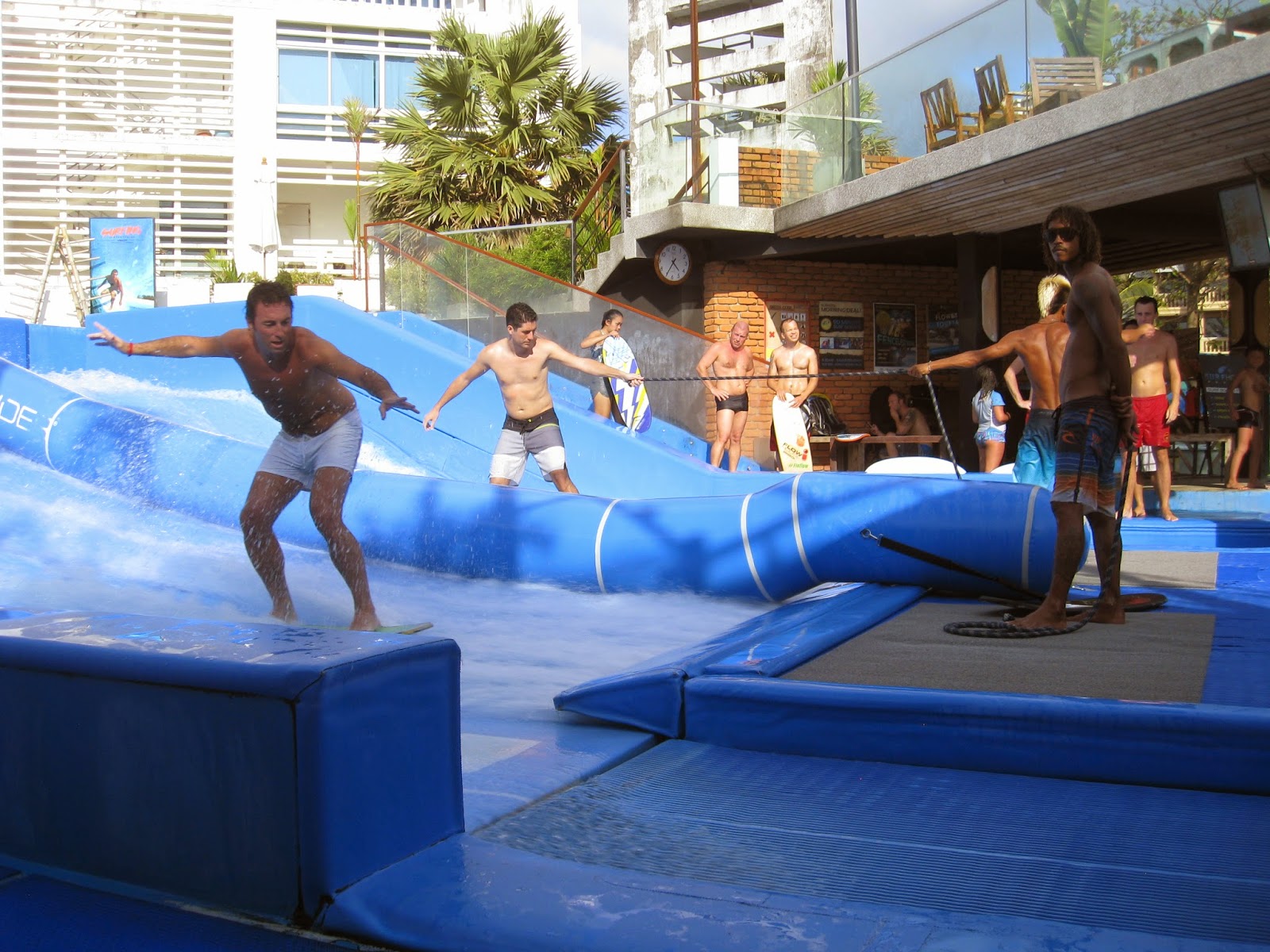 We started the day with a backpacker breakfast in our room (musli with milk, sandwiches, bananas, peanut butter on bread, coffee) then lazed around the pool for a couple hours.  The weather has been gorgeous the past few days – somehow not quite a scorching hot as before, but still plenty of sun, and cooler nights which is a nice relief.  We went for a walk to explore the busy streets around our hotel and the girls decided to go for a spa – Ana got the hour long facial and massage while Stella settled on the manicure.  While they did that, Magnus and I went in search of cheap beer.  It took about half an hour, but we eventually found a restaurant serving large bottles of Chang for 100 baht (just over three bucks), which is about as cheap as we’ve seen it.  The range in prices was incredible; one place called the Dino Bar was selling the same bottle for 240 baht, while others sold it for 180, 140 and 120.  The Olson family are always value shoppers, through and through.  The only cheaper way of drinking beer is buying it from a mini-mart, where the same bottle costs around 50 baht.

We then went for a big walk down to Kata beach and found it to be quite nice and much calmer and clearer than it was when we were in Phuket the week before.  We walked along the busy commercial strip which runs parallel to the beach and found the cool place that had this giant surf machine.  It had two jets which shot water up this bouncy castle type apparatus, creating a surface similar to an ocean wave that allowed people to surf on.  It was quite expensive so we didn’t try it, but we did watch for a while and saw some terrific wipeouts!

We looked for a café to stop for a drink but all the ones near the beach were ultra touristy, expensive and simply not very nice so instead we stopped at a mini-mart and picked up some road pops then enjoyed our cold drinks as we wandered around the markets.  Actually, the rest of the family wandered through the markets and I found a nice piece of pavement and drank my beer while watching the vendors and tuk-tuk drivers harass the tourists passing by.  On any street in Phuket, there are three adversaries that you must deal with constantly.  These are tuk-tuk drivers, massage girls and tailors.  Here is what happens walking down a typical street in Phuket.

As you step out of your hotel, there will be a shiny tuk-tuk sitting in front of the stairs with a dude sleeping inside, but he can sense the presence of tourists and wakes up as you approach.

“No thanks, we’re just going for a walk,” you reply.

“Where you going?  I give you a ride,” he offers again.

This is when you stop talking, keep walking and don’t look back.  About fifteen steps later you will come to a massage parlour/beauty salon/fish spa where there are at least ten women sitting in front, all wearing the same uniform, and all looking at you saying, “Massssaaaaaaaaaaaaaaage?” in an unusually high pitched tone, and slowly building crescendo of skull penetrating blare.

“No thanks,” you reply politely, fighting the temptation to say, “No thaaaaaaaaaaaaaaaanks.”

At this point, your kids walk over to the fish tank to stick their fingers in and you are in trouble, because now they think you are interested, so as they are pouncing on you and your family with brochures and price listings you say, “No, no!  No fish spa!  No thank you.”

“Your babies want fish spaaaaaaaaaa?” they cry in unison.

“C’mon you guys, let’s go, we are not getting fish spas, let’s get out of here!” you say as you rally your troops.  As you walk away you always hear one final, desperate, “Massssaaaaaaaaaaaaaage?” but you never look back.

Just a few steps later you will encounter a young, well dressed guy standing on the street, directly in your path, and as soon as you look up he will lock eyes with you, hypnotically.

“My fren, what country you from?  Australia?  America?” he asks, feigning interest in your life and extending his hand to shake yours.

Now the first time you encounter these guys, you probably do shake his hand and tell him what country you are from, and no matter where you are from, he will have a cousin that lives near you and will tell you he loves your country and city.  Even if you live in a small coal mining town in the middle of Siberia.  He will know your town and say he loves it.  So you learn to never respond to this question.

“No thanks what?  I just want to know what country you from.  Hey, you like a new shirt?  Tailored?  New suit?  Very nice.”

“No thanks,” you say and try to walk past him, but since you were daft enough to shake his hand, you find that he is not letting go and is actually trying to physically drag you into his shop to start measuring you up.

“Come have a look, very cheap.  Good quality.  The best,” he insists, as you are trying to worm your hand out of his.

“Leave me alone!” you finally lash out, exasperated.  The tailor looks crushed, as if you have really hurt his feelings, but you don’t care and even leave your family in the dust as you try to get away.  The last thing you are thinking about as a tourist in Phuket is wearing a damn suit.

It does not take long to figure out the best strategy for navigating the streets of Phuket, which is eyes forward, head down, talk to nobody, stop only for beer and food.