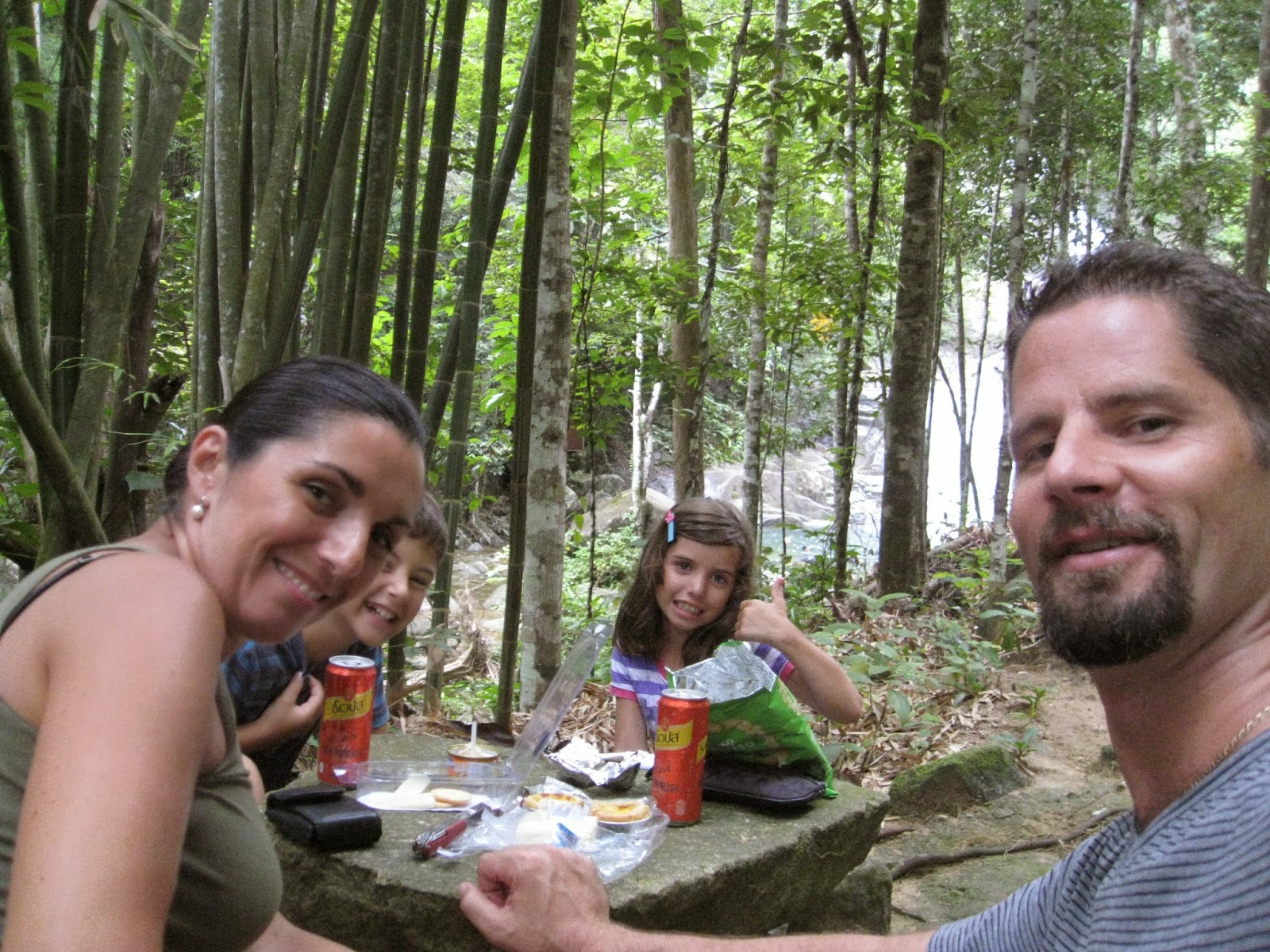 After yesterday’s car rental experience we decided to do it in style and rent a car for two weeks to explore the country.  We checked at a different car rental shop and they were willing to rent us a small car for two weeks for 8,000 Thai Baht which works out to about $270 bucks, not a bad deal as long as you don’t crash into anything or have the car heisted.

Ana went to a bank machine to retrieve some local cash and as she was typing in her code the screen fizzled, zapped and completely locked up, thereby ensnaring her precious bank card.  As the machine was right beside our hotel she asked the hotel front desk to call the company and get them to come out and open up the machine so she could get her card.  Easier said than done – after watching her spend half an hour on the phone, getting transferred around and frustrated, I walked over to the machine to have a closer look.  Pushing any of the keypad buttons simply caused a beeping noise and the screen remained blank.  Suddenly, there was this voice that originated from deep inside my head and said, “Kris, use the IT force.”  Actually, it wasn’t really a deep voice, it was more high pitched, squeaky and quite irritating.  But as I listened to the voice I remembered - I work in IT!  I can fix this!

Thinking back to when I used to work (yes it was only a month ago…but feels like an eternity) I remembered the sacrosanct Contol-Alt-Delete command so I tried three buttons simultaneously, in the hopes of a reboot, or at least an error message, which would have likely been in Thai, but I would cross that linguistic challenge if I got to it.  No luck, so I tried dozens more combinations and still nothing.  I inspected the machine more closely and found a plexiglass panel, and through the panel I could make out what looked like a network router and a web camera.  I gave the web camera a giant sneer and the middle finger…then waited.  Still nothing.  I tried a couple more Control-Alt-Deletes but this time using five button combinations, and I also stuck my tongue out, but still no response.  I walked around to the back of the machine and found an unlocked access panel, so I opened it up and saw, right before my eyes, two breaker switches.  Of course, my inside voice screamed, the hard reboot!  The ultimate IT fix…for anything.  So I thrusted my hand into the guts of the stubborn machine, flipped the breakers off and Ana’s card popped out!  Ana was delighted and she nearly announced, “My hero!”  I did a double fist pump, followed by a victory sign and finished up with an awkward happy dance that embarrassed both myself and my family.

With cash in hand, luggage in the boot, kids in the back and smiles all round, we blasted off confidently, and got lost, yet again, in the maze of small roads, this time ending up in a completely deserted gravel path beside a field.  We reached into the glovebox and found a detailed road map, which helped us finally navigate our way out to the main road.

We headed north and were soon leaving the island of Phuket over a small bridge that connects it to the mainland.  This lead to an excellent, well marked highway and we followed it through some jungle countryside, a few smaller towns then finally a larger town where we pulled over at a Tesco to get some food.  It was a very well stocked, modern grocery store and we found some good lunch food then continued on our way, looking for a nice place to stop.  We soon saw a sign for Lampi waterfall and pulled in to check it out.

We found some natural rock tables and had a nice picnic lunch – the first picnic of our trip as far as we could remember – surrounded by jungle and a large, multi-tiered waterfall.  We then walked across a suspension bridge, hiked to the top of the waterfall, and jumped into the pool for a refreshing, cool swim, all by ourselves with nobody else in sight.  By this time the heavens had opened and we found ourselves in the middle of a tropical downpour, so there we sat in the waterfall pool, getting hit by cool water on all sides, which was in stark contrast to the crushing heat we were feeling only a few minutes before.  By the time we hiked back down to the main changing area, the place was entirely deserted, save for a single guard at the gate.  We dried off as best as we could, got back in the car, headed north and soon reached our destination for the day – Khao Lak.

Khao Lak was one of the worst hit parts of Thailand during the 2004 tsunami, accounting for the majority of deaths – at least 4000 of them, possibly up to 10,000 including all the undocumented migrant workers from Myanmar, and has been completely rebuilt since then.  In fact, there are few signs here that the tsunami ever took place, but one of these is a Thai navy boat which was washed 2 kilometres inland and has been left in place and set up as a museum and memorial to the disaster.

We easily found our hotel, got unpacked, then went back into town and had a delicious dinner at a restaurant.  The main strip in Khao Lak has dozens of restaurants and bars and many shops so we should have plenty to do during the three days we plan to spend here.
Posted by Kristofor Olson at 11:01 PM